Jagielka: We've got to pick ourselves up 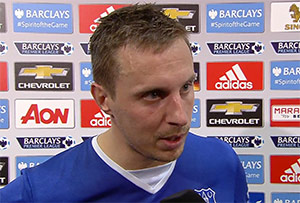 Phil Jagielka faced the cameras after today's 1-0 defeat at Manchester United, Everton's third Premier League defeat in a row, but the downcast skipper could find few silver linings from a highly disappointing display.

Anthony Martial capitalised on sloppy defending by Seamus Coleman in the 54th minute to slam home what proved to be the winner and though Jagielka powered a header off the crossbar soon afterwards and was denied a late goal by David de Gea, the Blues were anaemic overall.

“Definitely,” a visibly dejected Jagielka said to Sky Sports after the game when asked by Geoff Shreeves if the Toffees' dressing room was deflated. “You come to a place like Man U and your goalkeeper hasn't really (had) too much to do and you end up losing 1-0, it's a little bit of a frustrating one.

“But we've got to try and pick ourselves up now. We're on a bit of a disappointing run at the moment and the only way we can correct that is by looking forward to the next game.

“We didn't really take our chances. Obviously my one hit the bar and then there's a cross that takes a slight knick, we failed to defend it properly and, unfortunately, they had Martial as the right man at the right time to slot it home.”

Asked by Shreeves how Everton can turn their poor run of League form around, Jagielka was left searching for answers, although he suggested that some players will need to raise their performances between now and the FA Cup semi final in three weeks' time because places aren't guaranteed.

“I don't know,” he replied. “We need to keep playing to our strengths and try to find some confidence.

“We've got some big games coming up even before the semi-final and I've said before that if you want to play in the semi, you have to make sure your form's pretty decent so there's a lot to play for between now and then. It's up to us as players to turn this run of losses into something better.”

Playing countless hopeful long balls up to Lukaku something that has never been his strength, playing Barkley out of his position when he's been playing so well in No 10 position, playing Lennon out of his position and in a position where he doesn't have the tactical awareness or the skills to contribute meaningfully in a game – these things are costing us game after game.

And when you add his inability to organize a defence properly, it's no coincidence that we're lying behind Tony Pulis's West Brom!
Brian Porter
2 Posted 04/04/2016 at 06:18:43
Well, if the bloody captain doesn't know and the idiot masquerading as a manager doesn't know how we're going to turn things around, we're pretty much fucked aren't we? Sums up our season perfectly in a way, the blind leading the blind and ending up down a dark alley surrounded by predatory muggers! Jagielka is beginning to sound more like Martinez every day, God forbid.

At least I was pleased to see the press starting to show signs of questioning Martinez's tenure at the club last night. TalkSport in particular seem to have realised the fans have turned against him. It was interesting to note that the majority of fans polled by them were in favour of Pellegrini as a replacement for Martinez, not a name that's been too popular here on TW. Having said that, my poorly epileptic dog could probably do a better job than Martinez.

There were definite signs in yesterday's second half that it appeared things,had been said at half time and most of the team looked like they simply didn't want to do it for Martinez any more. I hope that's true as let's not forget it was player power that effectively cost Mourinho the job at Chelsea.

We do need some signs of fan revolt at our remaining games too. The board have to be dragged into the real world and made to realise the strength of felling against Martinez who is rapidly becoming one of the most hated managers I can remember in 57 years of supporting our great club.

Jags you had a decent game yesterday but please don't insult our intelligence even more than you have already.

Would love to be a fly on the wall in the dressing room (but not in a pervy way)...

Got to be better than the joker in charge at the minute.

Under Moyes he was allowed to defend and play in a defence that had a backbone to it, be it partnering Distin or the then immense Joleon Lescott in 2008-09.

These days, it's like a circus act watching the team trying to defend under the orders of the man who won't learn.

The defending, overall, was OK yesterday, but their goal was easily avoidable, and scored at a time when Everton were starting to lose momentum, as we do a lot because some of the players are not in good enough condition, and appear not to be able to rescue games from a losing position.

Tony Steele
10 Posted 04/04/2016 at 10:03:53
Same old soundbites but what else is he supposed to say? He has to be positive and look forward to the next game. He can only do so much.
Chris O'Callaghan
11 Posted 04/04/2016 at 12:06:19
I think Jags was the only person who can hold his head high from that debacle of a game yesterday, everyone else has given up the morale is as low as it has ever been and in any other club Martinez would be sacked in the summer but not our beloved club even when tits are up he still remains immune from what should be an enevitablity!

Bring Moyes home and sure up the defence and actually get the players fit again (how many times this season has the players tank been empty by the 80th minute?!) and at least Moyes has the know how to at least bring on suitable subs and line up a team based on their actual positions!

I will probably get slated for wanting him back but surely it's time to come home? NSNO

Don Alexander
12 Posted 04/04/2016 at 13:40:58
A very recent post on a different thread stated that the players had very recently decided en masse to ignore the coaches at FF and instead they'd all visited the gym. I assume that was an effort by them to improve their core fitness, which they must surely have long known is lacking.

It also indicates, if true, that revolt is in the air. The recent performances in matches and Jagielka's hangdog demeanour suggest the same. I really really hope that that is the case, that Mr Moshiri knows about it, and has seen what we all see, no future success for him either with two-bob Bill or the two Bobs themselves on board.

I'm glad he looks to be taking it so badly. Shows he cares about the results. Please get rid of Martinez now. How can the club continue to accept these results? It's madness.

I am by no means expecting the government to step in and remove Bobby but if it gets some traction with local papers etc then it might encourage a conversation between Moshiri and Kenwright.

Anyway here's hoping. So if you copy the link into your browser and sign it I would appreciate it greatly. Assuming you agree that Martinez needs to go.

David Connor
16 Posted 04/04/2016 at 16:10:28
Pissed off with the lot of you. Half of this squad need to be replaced. They all need to take a long hard look in the mirror, especially the manager. The fans are fucked off big time. Pull your fingers out.

If the players are discontented with the manager let him know and help us put an end to his all possession, no-end-product brand of shite football. No good trying to play like Barcelona when the standard of players are not much better than Championship standard.
Denis Richardson
17 Posted 04/04/2016 at 16:39:33
Read the headline and actually laughed – I am so indifferent to this now I'm not even angry anymore.

Copy and paste job every week... at least the cricket season's not too far off.

I said at the start of the season that a good one would be to finish top half. And with this phenomenal clown in charge it would be good. But with the team at his disposal his standard is a fucking disgrace.

This new bloke in charge will be a grand irrelevancy if he can't sack the nice Mr Martinez.

DON'T GO TO THE NEXT TELEVISED GAME IN A SILENT PROTEST.

William Cartwright
21 Posted 05/04/2016 at 17:34:57
I've watched the Jags interview a couple of times and believe his comments say a lot more than is realized on first viewing.

His demeanor says it all.

His comment, with a mid sentence pause "It is up to us in the changing room to turn things around and make it better . . "

Lukaku's expressed desire to leave the club (which is perfectly understandable) should be accommodated immediately. Everton are not a shop window to accommodate his marketing needs. Sod that for a game of soldiers. No wonder the morale is all tits up. No wonder the genuine quality committed footballers like Jags, Baines, Coleman, probably Barklay, are all messed up.

Thank you Roberto for displaying a complete lack of managerial skill, you utterly incompetent pillock.