The payments are determined by the equal share that each club receives from the broadcast rights deals, merit-based payments that are worth £1.236m per place in the table, and then facility fees that come from every game that is shown live by domestic TV.

Everton will receive a £55m equal share payment, £12.4m for finishing 11th and then additional £15m in facility fees from their 18 live televised games. It represents around a £5m increase on 2014-15. 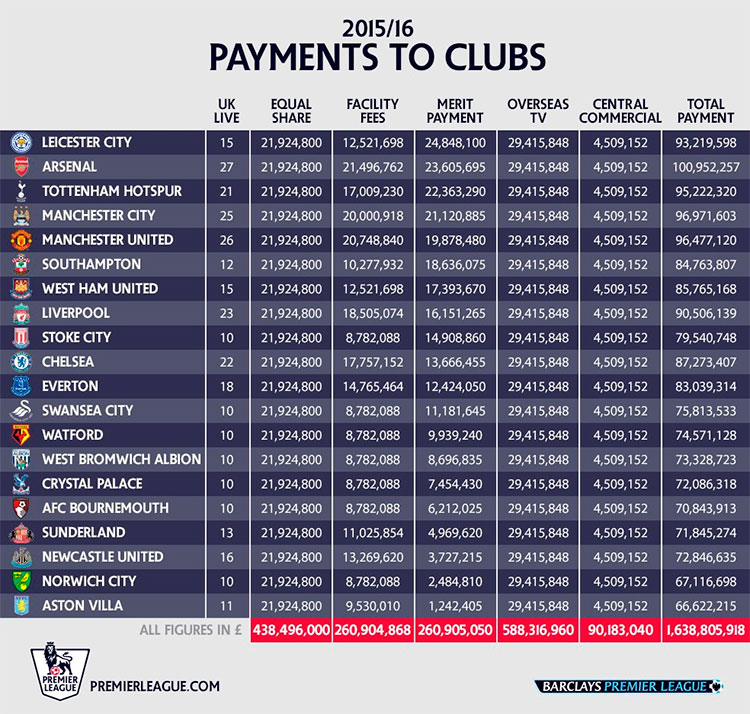 The money table just goes to show that even though the red shite have been poor for a few seasons now, and Chelsea and United this season, they are still Sky favourites.

Yet teams like Southampton and West Ham that have played better don't get shown as much.

Alan J Thompson
6 Posted 17/05/2016 at 05:45:32
Oh I don't know, Eric. Add to that gate receipts, the 3M shirt sponsorship (didn't we do well!) and a couple of new names to go on shirts, unfortunately still in the hands of the Marketing Dept but with a new man at the helm, and it could be back to your song.....bring me sunshine thru' the year, bring me......
You can't see the join?
Eric Myles
7 Posted 17/05/2016 at 07:05:01
It'll be the increase in the telly money next year that will help us out Alan, current turnover barely makes ends meet.
Ernie Baywood
8 Posted 17/05/2016 at 07:10:54
Remember when we used to look at these tables and discuss how unfair it was that we got less in facility fees than clubs we were outperforming every year.

Now I look at that and think we ripped off the rest of the league with the level of performance we provided.

Can be fairly certain it will drop (in relative terms) next year though. Roberto - the gift that keeps on giving.

Dave Pritchard
9 Posted 17/05/2016 at 07:16:02
We did seem to get a lot of TV coverage this past season. Can see that being lower next season unless we start the season well. However, looking at the difference between payments for us and say Stoke with 10 fewer games the difference is only around £6 million which is like 50p to the normal household budget.
Colin Glassar
10 Posted 17/05/2016 at 07:50:36
Depends on the manager as well Dave. Sky love the likes of Klopp, Sam and Mourinho for their sideline antics as it adds value to their show.
Ognjen Mojovic
11 Posted 17/05/2016 at 12:23:23
Is total amount of TV money bigger than in previous two seasons? I Or is it just differently divided? If it is the first case, how they earned additional money?
Thomas Surgenor
12 Posted 17/05/2016 at 12:37:18
Surely under Moshiri this will improve further. I can't see Kitbag or Chang lasting much longer.
Steve Cotton
13 Posted 17/05/2016 at 12:50:51
So we get £3M a year from kitbag yet Chelsea have just bought their way out of a £30M a year deal because they can get £70M somewhere else. I assume the £3M we get is probably fixed for the next 5 years as well. What a great bit of commercial businessâ€¦

Are there tables available showing revenue from sponsorship deals as well? If so, they will make even poorer reading.

Andrew Ellams
14 Posted 17/05/2016 at 13:01:36
The decision by Sky to show the RS v Chelsea dead rubber in the last week of the season at the same time that our game at Sunderland was on just goes to show the ability that they have to influence the earnings of any club. The shite finished one place above Stoke and were never contenders for anything but managed three times as many live appearances.
Eric Myles
15 Posted 19/05/2016 at 11:49:27
Steve (#13), we're 9th in that table: