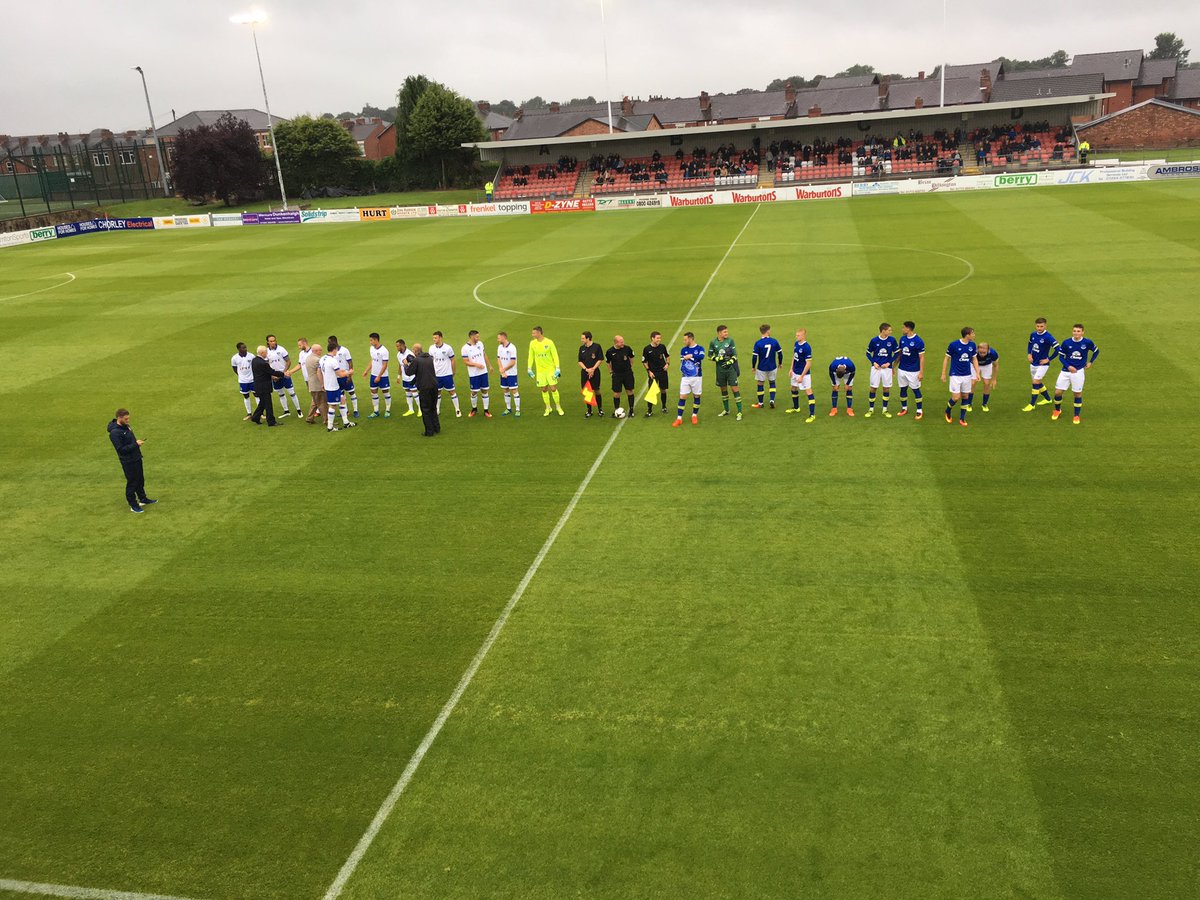 The teams line up ahead of tonight's Lancashire Senior Cup Final at Leyland.
David Unsworth's Under-23s finally beat Oldham Athletic in the Lancashire Senior Cup Final at Leyland tonight, but they needed 5 perfect penalties to do it. Despite an early penalty scored by Ryan Ledson, they fell behind for much of the game with Davies diverting Garbutt low shot, forcing a late equalizer to set up the penalty shoot-out where the young Blues fired in all five spot-kicks in faultless fashion to win their third trophy in 10 days!

The last match of David Unsworth's pre-season programme for the second string was a carry-over from the earlier rounds of the competition that were completed last season.

Everton started with the bulk of their U23 team on the quest of this rather impressive trophy treble, having already won the Liverpool Senior Cup and SuperCupNI this pre-season.

Tom Davies, Gethin Jones, Luke Garbutt, and Kieran Dowell have featured in some first-team games this season but appear unlikely to be named in Ronald Koeman's senior squad for the first game of the Premier League season, which is rapidly approaching.

The boys in Blue got off to a bright start, Ryan Ledson converting from the penalty spot after Courtney Duffus was felled in the area after 11 mins.

But the scores were leveled when Luke Garbutt's header ended up in his own goal after a dangerous in-swinging free-kick from Oldham.

The pressure on the Blues increased, with a great reaction save by Hewelt on the half-hour, who got down low to his left to keep out Oldham's Cassidy from close range.

But the Oldham pressure was not to be denied as Cassidy stole possession on the byline before beating his marker and firing past Hewelt to give Oldham the lead a few minutes before half-time.

Liam Walsh replaced Leandro Rodriguez after the break and Dowell set up Duffus who almost scored soon after, but his effort was cleared off the line. Unsworth eventually switched out most of his attacking players in an effort to get an equalizer but the scoreline remained the same with 20 minutes to go.

There was a great chance for Tom Davies, who beat two defenders but then missed the target from the edge of the penalty area. But Everton finally leveled the game with just 7 mins left when Davies diverted Garbutt's low shot into the bottom corer of the Oldham goal.

End-to-end excitement as both sides try to win it in the closing stages. First. a big chance for Oldham as substitute Brendan Glackin goes clean through, rounds goalkeeper Hewelt but shoots over.

Then, in the 90th minute, Liam Walsh's volley strikes the inside of the post and is cleared! The final whistle blows and it's straight to penalties to decide who takes home the magnificent old trophy.

Ledson, Jones and Walsh convert their penalties, with Edmundson missing Oldham's second. Henen then scores a lovely Panenka to make it 4-2, so down to the final one for Everton to clich it....

That honour fell to Luke Garbutt who fired home to give Everton the victory and secure a magnificent third trophy win during the course of pre-season games for the Under-23s, following their successes in the SuperCup NI and the Liverpool Senior Cup.

Great for him to get this experience, but he should be on the bench at least v Spurs.

I also agree with Jamie - 4 - Unsi certainly looks to be a manager in waiting. There is something - er well - managerial about him.

Fran Mitchell
9 Posted 10/08/2016 at 22:13:59
Great Stuff, hopefully Davies, Ledson, Dowell, Charsley and Duffus can all make the step up. Add Kenny and Pennington when they get fit and our youth system could really pay off with a generation of top class talent. Adding high quality youth that has been poached from others in the mound of Foulds, Galloway, Browning, Holgate and Sambou also makes the future exciting.

Hopefully they'll stay with us, rather than turning into a Southampton style feeder club.

Also, hope they get a chance in he first team. If they're good enough they're old enough.

Hopefully we'll see a few of them breaking into the first-team in the not too distant future and personally would like to see Davies feature this season (haven't seen that much of him but he has a bit of nastiness in him I like, plus a good engine).

Is there a schism between Koeman and Unsy where Unsy says "if you won't use them I will?" Or is there some kind of masterplan to sell them or loan them and U23 games give them a shop window?

Ian Price
13 Posted 10/08/2016 at 22:59:09
Great result for the lads which was a fairy even game to be honest. Tom Davies looks very promising and is definitely looking at knocking on the first team door soon.
John Dean
14 Posted 10/08/2016 at 23:16:04
On a cold, drizzly, miserable Wednesday evening in Leyland, EFC u23s played a game of contrasting halves. The first half was dominated by a strong and zealous Oldham side who pushed down the flanks to good effect and earned their half-time lead courtesy of an oggie as the ball slipped off Garbut's head from an in-swinging free-kick and an awful error of judgement from Feeley as he desperately tried to save a corner at full stretch but merely presented the ball to an Oldham striker who calmly sidestepped a challenge and blasted home.

Unsworth had seen enough by half-time and made several changes, the most important being that of introducing Liam Walsh in place of the ineffective Rodriquey. Walsh ran the game thereafter and he was ably supported by Tom Davies who played further forward and provided more of a goal threat than our strikers and a strong defence marshalled well by Matty Foulds. Apart from two breaks by Oldham, we owned the second half as Oldham quickly tired and it was a surprise that we needed 5 perfectly struck penalties to win the game.

Chris Corn
15 Posted 10/08/2016 at 23:26:45
I don't really understand McAlaney. He just hangs around and watches his career pass him by. He has a career we would all kill for so he should demand his agent get him a decent move to make the most of it before its gone. 23 is certainly not young for a player who has been at the club since childhood and has played the negligible amount of first team games he has.

Smacks to me of someone who lacks professional pride and just wants to tell people he plays for Everton.

Probably more important is to keep Rhino happy as RK won't be around long term and I reckon he has the making of a good manger.

He ought to move on though; Wigan thought quite highly of him at the end of his loan so he can certainly earn some bread else.

Peter Cummings
22 Posted 11/08/2016 at 14:19:05
As Koeman & Co continue to load us up with cast off overpriced merceneries and an over the hill probability here we have a group of lads who regularly make us proud and actually WIN things, yet continue to be ignored for deserved PL first team inclusion, not to mention a coach who has proved his competence as a potentially great manager of the club he would die for,

If Everton FC think this is a recipe for 'success' at Goodison and European competition I believe the coming season will show, yet again, they are proved to be disastrously wrong.

Patrick Murphy
23 Posted 11/08/2016 at 14:29:00
Peter (22) Having these young talented players already at the club is part and parcel of trying to build a team that can actually challenge, in the meantime the manager and staff, have had to bolster certain areas in order to make the current Everton team difficult to beat. If any of these young players step up to the plate and prove they can handle the rigours of the Premier League on a regular basis I'm pretty certain they'll get that opportunity under Ronald Koeman.

I would have thought that Koeman's remit is to put together a team which can compete regularly in the upper echelons of the league, and when Koeman inevitability leaves Goodison, the likes of Unsworth will be ready to take over the reigns.

I don't know whether or not we'll be successful under Koeman, but I'm willing to give the man a chance.

James McPherson
24 Posted 11/08/2016 at 14:36:54
Given the now evident lack of influence Moshiri has and the hand of Kenwright and his dumb lieutenant are still on the well and truly on the tiller - promising youth at EFC = future sales to bigger clubs...sickening mentality