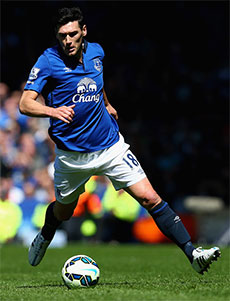 Everton won for the fourth time in succession and retained the second-place berth they occupied coming into the day thanks to another impressive come-from-behind victory.

Ronald Koeman's side were seething after referee Lee Mason had failed to chalk off the opening goal for Middlesbrough for what looked to be a clear foul on Maarten Stekelenburg and they channeled that sense of injustice into a quick equaliser through Gareth Barry.

The veteran midfielder peeled off his marker at a 24th-minute corner and was in the right place when the ball broke to him to sweep home beautifully and mark his 600th Premier League appearance with a goal.

Just as they did at West Bromwich Albion last month, where Barry scored the winner, Everton then turned the match on its head shortly before half-time. Seamus Coleman collected a neat pass from the stand-out performer on the day, Idrissa Gueye, and cut across two defenders before tucking the ball into the corner to make it 2-1.

The match was effectively sewn up in first-half stoppage time when Yannick Bolasie swung a wicked cross into the box, goalkeeper Victor Valdes hesitated and the ball found the far corner via what must have been the merest of touches from Romelu Lukaku. The Belgian claimed the goal and has officially been awarded his fourth of the season, at least until the Football Association's goals assessment panel adjudicates in the coming days.

That capped what ended up being a strong performance by the home side in the first 45 minutes and it provided the platform for what was a largely uneventful second half in which Ross Barkley came closest to adding to the scoreline with a couple of low shots that further tested Valdes in the Boro goal.

Restored to the starting XI by Koeman and growing in confidence again as the match wore on, the 22-year-old vindicated the faith showed by his manager with a solid display in midfield.

Everton's only concern on the day was an injury to Lukaku in the second half following a poor challenge by De Roon which forced the Belgian off with 65 minutes played. That gave Enner Valencia the chance to make his debut and while the Ecuadorian didn't get an opportunity to mark the occasion with a goal, he put in a good shift up front.

The win gives Koeman a return of 13 points from a possible 15 in his first five league games and represents the Toffees' best start to a season in 38 years.