Koeman not prepared to risk Baines against Palace 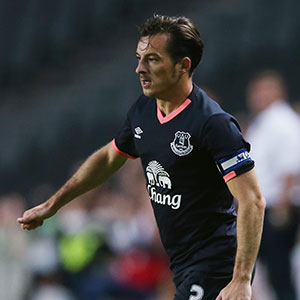 Leighton Baines will miss a second Premier League game because of a hamstring strain, manager Ronald Koeman has announced.

The fullback was absent from the defeat against Bournemouth last weekend after picking up the minor complaint the previous week and he has been ruled out for tomorrow's clash with Crystal Palace as well.

"If we were playing our last match of the season tomorrow then he [would be] starting but it's too risky," Koeman explained in his pre-match press conference at Finch Farm this afternoon.

"After tomorrow we have the international break and we don't want to take that risk starting Leighton tomorrow."

Koeman confirmed, however, that Romelu Lukaku will start despite some lingering aggravation from the foot injury he sustained against Middlesbrough in the Blues' last home league game.

"[Lukaku's injury] is still painful but he did the sessions this week and he will start," Koeman told the media.

The Dutchman also provided an update on Irish midfield duo Darron Gibson and James McCarthy, both of whom underwent groin surgery earlier this month. He expects both players to resume training next week but betrayed some frustration with the fact that McCarthy has been called up by Ireland for the upcoming internationals despite not having fully trained since his operation.

"Darron will normally be part of the sessions for next week," Koeman said. "James is also close, normally he starts training with the team next week [as well].

"But the international teams are coming and they've called James up after not playing for six weeks. You have to accept the Fifa rule [allowing them to do that].

"The player wants to go. I hope [Ireland] will protect the player and realise that he hasn't had team training for five to six weeks. But that happened with Seamus Coleman after four or five weeks [out] and luckily that went well.

"[McCarthy] is a risk. He had an operation four, five weeks ago but we'll see what happens next week.”


Steavey Buckley
1 Posted 29/09/2016 at 16:37:22
I do believe it was a big mistake (that I am reiterating again) to allow Galloway to go out on loan. Oviedo is not good enough anymore, and proved that against Bournemouth. And if Barry is fit not as well, Crystal Palace will be fancying their chances.
Paul Kossoff
2 Posted 29/09/2016 at 16:38:35
It's a pity that teams seem to no longer have control over whether a player is fit to play or not. McCarthy shouldn't be included in Ireland's squad as he can't be fit.

Hopefully none of our players pick any injuries up in the break, I don't think our squad is good enough to cope with key first teamers out.

As you say Ste, Palace will fancy it on Friday, I can't see them set up for a draw, and with a good offensive front line they will be coming right at us.

Frank Wade
3 Posted 29/09/2016 at 17:17:13
A pity Galloway is away, but at least he is getting game time and learning.
Andrew Clare
4 Posted 29/09/2016 at 17:17:15
Unless something radical happens, I can't see us getting anything against Palace, Baines or no Baines. Koeman has got a monumental task on his hands and it will take some time for him to put a competitive team together.

We just have too many inconsistent players. I know the first games were against poor opposition, apart from Spurs, but there were signs of improvement. After the last two games, it now all looks a bit worrying.

Matthew Williams
5 Posted 29/09/2016 at 17:19:44
Bring back Garbutt from his loan spell or consider buying George Friend from Boro in January. Baines can't go on forever, niggling injuries are starting to be more frequent with him also.

As for Galloway, I see him more as a centre-back. in the future... but needs must, we have to beat Palace or slip further behind at the top.

Frank Wade
6 Posted 29/09/2016 at 17:22:29
I can't see McCarthy playing in any games for Ireland during this break. It certainly would be a risk for O'Neill to play him and he knows that. I can understand McCarthy wanting to join up with the squad after all the unpleasantness (to say the least) with Roy Keane's comments about his commitment in the past. He also had a poor Euros with Ireland, so would expect he is eager to show he is on board.

Back in the dark old days of the 60's, the Irish matches were played on a Sunday, so players would travel over to Dublin by boat on the Saturday night after a league game. There was a story of an Irish Man Utd player Tony Dunne, who after playing a league game at Highbury, was packing his bag and heading for the door with Shay Brennan to go to Dublin. Matt Busby is alleged to have told him. "You're going nowhere, you're injured, you've gone over on your ankle."

In the event of injury, such as that incurred by Gibson in an Irish match, the FIFA Club protection programme dictates that FIFA pay the player's salary for a max of one year while injured. There is a caveat where a player has an existing injury when travelling, no compensation is played to the club. For this reason, Ireland will be reluctant to pick McCarthy for a game.

Geoff Evans
7 Posted 29/09/2016 at 17:26:39
We need a good result against Palace after two recent abject performances. It's about time one or two or three started to justify their places and put in big performances before January.

Overload the left with Bolasie and Mirallas bombing Palace's defence.

Meanwhile, up front ... we can beat these.

Brian Harrison
15 Posted 29/09/2016 at 20:25:58
I was interested to read about Bolaise talking to Thierry Henry when he was at Finch Farm to interview Lukaku for the upcoming game against Palace.

Bolaise said he was asking Henry about how he went about playing wide, and Bolaise said Henry's tips were very useful. Which got me thinking why don't more teams bring in top players just for a day to talk to the players, especially those playing in their old positions. Maybe get Ian Wright or Collymore in to talk to Lukaku and Barkley.

Sorry chief but Bolasie as a wing back is barmy.

Jeff Armstrong
22 Posted 30/09/2016 at 08:51:54
And Mirallas "bombing" is also a bit barmy – he's been absolutely terrible in the last 4 or 5 games.
Michael Polley
23 Posted 30/09/2016 at 19:25:30
Oviedo is our weak link and Palace will exploit that. Hopefully he can stand up to the test. Not the seem player since a leg break 3 seasons ago. Always thought it was strange loaning out Galloway, but I suppose the kid is getting game time at West Brom and that can only benefit us in the long term.