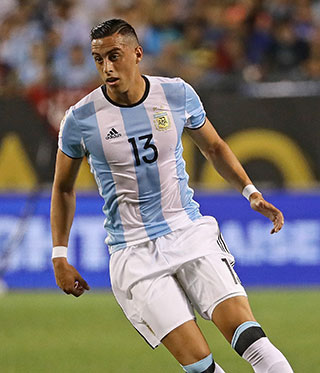 Ramiro Funes Mori was on the end of another convincing loss as Brazil beat Argentina 3-0 in World Cup qualifying.

Five days after the 5-0 defeat to Chelsea in the Premier League in which he played the full 90 minutes, the Everton defender was one of three Albiceleste players booked as goals by Philippe Coutinho, Neymar and Paulinho delivered the hosts a victory that takes them top of the CONMEBOL qualifying table.

Argentina, meanwhile, are eight points behind in sixth place, one spot below the threshold for qualification for Russia 2018, having failed to win any of their last three matches.


Brian Porter
1 Posted 11/11/2016 at 06:19:55
I watched this game, found it very entertaining. The big difference between this, and our drubbing at the hands of Chelsea was that, despite losing 3-0, Argentina didn't play badly, but were overwhelmed by a statuesque display by Brazil and were let down by their forwards who had an awful off-day.

Higuain was terrible up front and even though Messi found chinks in Brazil's defence Huguain was conspicuous by his absence, being off the pace and seemingly unable to link up with Messi who looked increasingly frustrated as the game wore on. In fact, Higuain reminded me a lot of Lukaku, having one of those games where he seemed disinterested and simply couldn't be bothered to put in the necessary running and effort.
Brian Furey
2 Posted 11/11/2016 at 11:09:07
How did Funes Mori play?
Jay Wood
3 Posted 11/11/2016 at 11:32:36
Funes Mori was 'OK', Brian F, but was rightly booked (again! he picks up a lot of yellow cards for Argentina) for a nasty foul.

I can't agree with Brian P that the visitors 'didn't play badly.' They were completely outplayed by Brazil, apart from a decent opening spell. They carried no threat in attack at all, no matter who they had on the pitch, and that included (at different times) Messi, Aguero, Higuain, di Maria and Perez.

Argentina were seriously lucky it wasn't 5-0 or 6-0 at the end. Neymar and the teenager Gabriel Jesus (destined for Man City in January when the Brazilian league concludes in December â€“ he is currently with the likely champions Palmeiras) continue to dovetail beautifully together for Brazil.

Five wins on the bounce for the new Brazil coach Tite who has instantly transformed the team into a resiliant, yet vibrant, attacking force after the dreary pragmatism of previous coach Dunga.

At the back Argentina are light so he gets a game. Easily pulled from his position and extremely rash, and nasty too. The lad is a disgrace in this respect, in his time at Everton hes made several questionable tackles.

Even if I could look beyond this nasty streak, he simply isn't good enough, and is fortunate Jags is in rapid decline.

Expect him to be shipped out by season end.

Funes Mori looks a bit lost at times and loses the ball needlessly in midfield at one stage to allow a Brazilian attack which came to nought. Neymar, Coutinho and Gabriel Jesus look the business. As much as it pains me to say it, Coutinho's goal worth the watch.

What's going on with Funes Mori? A disgustingly cynical performance at Anfield last season, for which he shall always be remembered by future Evertonians discussing the bad old days, and this season looking totally out of his depth at all levels?

Anyway it misses the point; Funes Mori is not only not good enough, the fella is nasty blart to boot.

He has a good brand, so we will get our money back. Sorry, David, time to move him on... and Jags tbf, they'd be few on TW that wouldn't disagree, time has caught Jags up.

Coutinho's a little gimp. How did he get a work permit there when he didn't make the national team? Someone ticked the "pact with Satan" &/or the fake Portuguese grandma box at customs, as per.

As Tony Soprano would say "Worra ya gonna do?"

"Gimp?" Come on. He is a magnificent footballer. I'd personally give him a piggy back across Stanley Park. He is everything our boys are not.

I hope Walsh can find us a few gimps of his caliber, then.

He is to 'them' what Hazard is for Chelsea, Ozil for the Arse and De Bruyne for City.

After being on the fringes of the Brazilian side for many years, he is now one of their 'must' picks.

From my experience, our rivalry with t'other lot never blinded Blues from acknowledging a good footballer, no matter what colour shirt he wore.

Evidently, in your case, that does not apply.

In Argentina, there is a phrase for the defense: "The ball or the attacker can pass through the defender. Not both".

Actually I think that Funes Mori in Everton is rather calm with the hard tackles. You don't even see 80% of the hilarious mistimed tackles he made in River or in the National team