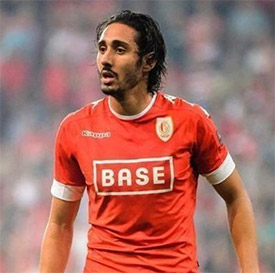 Ronald Koeman hopes to bring in more players this month but Ishak Belfodil won't be one of them after he confirmed the Blues have dropped their interest in the striker.

The Algerian striker looked set to follow Morgan Schneiderlin through the door this time last week in a £10.4m deal but negotiations subsequently stalled.

Reports that the transfer was in jeopardy emerged over the weekend and Koeman told reporters today that Everton will not now be signing Belfodil.

"[He] was one of the players on the list but we took the final decision to not sign the player," the Dutchman said.

Apparently recommended to Koeman by Steve Walsh in November, Belfodil was something of an unknown quantity when it was first reported that the Blues were seriously interested in acquiring him.

A record of a goal every two games for Liege this season had brought the 25-year-old to Walsh's attention and a deal appeared to have been arranged fairly swiftly this month but it foundered in its final stages.

The player's camp were said to be unsettled by Everton's decision to bring agent Christophe Henrotay into negotiations to help finalise the deal while other unsubstantiated reports suggested that Koeman was ultimately unconvinced that Belfodil was the right fit for the team.

Koeman says that he and Walsh are still hopeful of adding more players this month but insists it will be a case of quality over quantity.

“We are still hopeful of bringing more players in but only if they make the team stronger,” Koeman said in his press conference today.

“We do not need to sign anyone to add to the numbers, because that is not what I like.

Yes, it is difficult [to sign players in January] because maybe you are interested in players and they can't leave the club now [but] maybe yes in the summer.

"OK, we can't sign the player we want now but we try to in the summer.”

I, for one, am happy that we didn't get him. There's better value for that money elsewhere.

Mike Berry
7 Posted 19/01/2017 at 18:54:14
It is possible that a past failed target or some new target is on now the horizon. Obviously we are still looking to strengthen in the forward area.

Also interesting that this player and Depay were being mentioned as possible signings; however, we have dropped interest in both, therefore something else is in the wind.

Xavier Spencer
10 Posted 19/01/2017 at 19:15:03
I'd draw stumps now and keep our powder dry. I'd be happy to finish 7th and give the kids the second half of the season to bed in. Davies, Holgate, Calvert-Lewin and Lookman all need lots of game time.

We have Gueye to come back and Schnerderlin to bed in. Lots to look forward to and it we get a head of steam up we might even finish higher.

Let's use the rest of the season to get used to the manager's new style of play and new system and then come the summer it'll be clearer exactly what we need.

Bill Gienapp
11 Posted 19/01/2017 at 19:22:00
Curious to see how the next two weeks play out. Honestly, I feel like Lookman and Schneiderlin alone make this a very solid transfer window. It's difficult to make sweeping changes to your club in January.

Obviously we have further needs and I'd love to see another signing or two, but agree with Koeman – only if the deal's right. There's no point in splurging on guys willy-nilly just for the sake of bringing in new bodies.

Anthony Dwyer
17 Posted 19/01/2017 at 22:52:50
Forgetting the fact we won't be signing this lad, I'm quite happy with the interview Ron gives saying he's more about quality not quantity.

I'd much rather Jags stayed as he's good cover for Williams, but as replacements for Holgate and Funes Mori I'm happy giving the younger lads a fair crack.

I'd agree though that we need back up or a partner for Rom; if the Algerian lad isn't the answer then we need to find the solution.