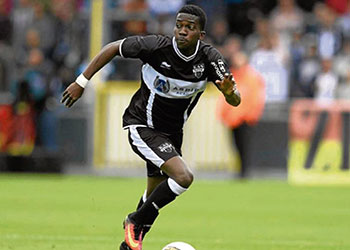 The young Nigerian is with Anderlecht for the season and suffered the injury over-stretching for a ball while playing for the Belgian club yesterday.

He will undergo an operation to correct the damage after which doctors will be able to put a timescale on his return.


Ajay Gopal
1 Posted 24/12/2017 at 08:07:37
Great, just when we long-suffering Evertonians start looking forward to someone exciting, he gets a long-term injury. We are a cursed lot, I tell you!
Alan J Thompson
2 Posted 24/12/2017 at 09:24:35
I suppose that is the end of that loan then. Let's hope it is not that long-term and he will be running before next preseason, assuming he is eligible for a work permit.
Steve Ferns
3 Posted 24/12/2017 at 11:24:22
This probably means he’ll have to stay in Belgium even longer. The plan was he’d be playing for nigeria and racking up the caps. He may have to wait to get a Belgian passport now, if so that’s another season. And we certainly don’t cancel the loan to get him fixed up here as those days won’t count towards getting his passport.
Brian Wilkinson
4 Posted 24/12/2017 at 11:54:44
Coleman, Bolasie, Barkley, McCarthy, Oviedo, Southall, Heath, Bracewell, now this guy... the list is endless on long-term injuries, when is Lady Luck going to be kind to shorter term injuries or even better, injury-free players.
Minik Hansen
6 Posted 24/12/2017 at 13:16:36
Here's for a speedy recovery. Meant to be? He will grow as a player, and while still so young, be able to come back strongly. We already have him, while we wait for him, we can find other players to fill the gap.

Regarding his inability to get the international caps to qualify him for Premier League status (I'm not sure of the mechanics of that), surely there has to be some dispensation or special arrangement that can be applied?

This might potentially deter any predators who are allegedly sniffing around though, I guess.

I haven't seen the report Lyndon cites that it's a medial ligament – Anderlecht's announcement was that he "tore knee ligaments" – but if so it MAY be less dire... MCL injuries sometimes require lesser surgery and have a shorter recovery time than ACL injuries like the one Bolasie suffered.

Anderlecht's press release goes on: “He will soon be operated on and the medical staff are in close contact with their counterparts at Everton to determine where the surgery will be.”

Henry is tied for second-top scorer in the Belgian Jupiler League with 9 goals in 19, and has 10 in 28 in all competitions.

However, there were signs that Anderlecht wasn't quite the situation for him that Everton would have hoped. He was consistently played on the wing rather than his preferred striker position by his coach, Hein Vanhaezebrouck, who just this week ripped Henry a new one in explaining why.

“It does not make much sense to put Onyekuru at the center, but when he is standing there, he does not move, and he just moves to the left... he always let himself down,” Vanhaezebrouck was quoted as saying by Voetbalkrant. “He does score now and then, but the last few weeks have not been as good either, his contribution went down.”

Perhaps in the wake of that comment Henry was trying extra hard against Eupen, his former club now managed by Claude Makelele. We'll never know. But as Tom (#9) points out, this does probably take him off the January transfer market (Man Utd, Barca and Fiorentina were also rumoured pursuers along with Juve) and ensures that he'll return to us in the summer. Hold a good thought that he's able to play by August.

BBC themselves have reported as much, saying that here would be absolutely no restrictions in any club making a bid for him. Juventus have enquired about him and other clubs have done the same, "reportedly". You okay with that?

He was top scorer in Belgium last season and joint top this season when he got injured so he was doing pretty well.

Speaking exclusively to AOIFootball.com from his base in Belgium, Onyekuru said that medics at Everton have reviewed the Magnetic Resonance Imagery (MRI) results and also the extent of damage to the leg, while clearing that the player and that he will be back on his feet in about six weeks as against the 12-15 weeks earlier reported in the media.

“Everton called for me to come back. They saw the picture of the MRI and they said I won’t need surgery. So hopefully, I will just go through the treatment and won’t need it,” the former KAS Eupen forward said.