Bolasie hoping for a fresh start at Everton 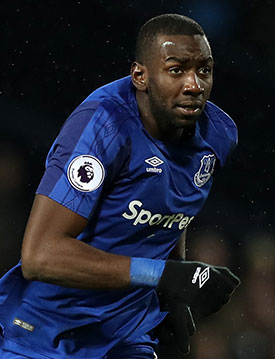 Yannick Bolasie has revealed how there were times he wasn't sure he would complete the long recovery from his career-threatening injury and he says he counts his return to action this month as a blessing.

The winger made his first start for Everton in over a year when he turned out against West Bromwich Albion on Boxing Day, more than 12 months after he ruptured the anterior cruciate ligament and tore meniscus in his knee.

He went through two surgeries and months of patient rehabilitation before returning for the Under-23s to get game time earlier this month and is now back in the first-team fold.

His injury came just four months into his Everton career and at a time when the team was struggling to find its best form after a decent start to the season under Ronald Koeman.

The 29-year-old hopes to now not only get back to his best and show Blues fans what he can do but he feels he could return a better player.

“Personally, I've played down the injury massively because it was career-threatening. But to be back where I am today is incredible and I want to thank the staff at Everton, the medical staff, my personal physio and my family for sticking by me, because it's been a long old journey.

“Hopefully I can carry on and get stronger now.

“When I started seeing a little bit of light for myself, that was great. But playing again has just been a blessing.

“I didn't want to come back and just have my name on my shirt and not be the same kind of player. But on Tuesday I felt that with a bit more match sharpness I'll probably be even better.”