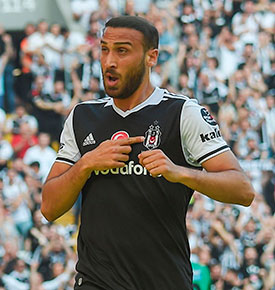 Cenk Tosun's move to Everton reportedly hangs in the balance as rival clubs look to swoop in
Updated Everton have apparently sent a delegation to meet face-to-face with Besiktas officials in a bid to land Cenk Tosun ahead of competition from Europe.

According to media claims yesterday, the club have agreed terms with the player, with further reports suggesting they were close to agreeing a £25m fee with the Turkish club but it didn't appear as though anything was settled at the time Sam Allardyce sat down with the media earlier today.

It now looks as though director of football Steve Walsh has headed up a party that has flown to Istanbul to ensure that Everton win the race to sign Tosun who looks to be leaving Besiktas in the coming transfer window.

He bade farewell to the crowd during that club's 4-1 win over Osmanlispor in a cup tie last night, with sources in Turkey reporting that his move to Goodison Park was a done deal.

“It's in the wind,” Blues boss Sam Allardyce said today of the Tosun transfer. “There's obviously an interest because we're actively looking for a front man but whether we are the ones to complete that deal or not I don't know.

"The interest from other clubs around Europe is our biggest worry if we are to secure that transfer.”

Valencia, Red Bull Leipzig and Roma have all been credited with interest in the 26-year-old in recent months while Crystal Palace and Newcastle are believed to have been tracking him from the Premier League.

A Turkish media source suggested later on Twitter, however, that the deal was done and that Tosun would be returning to England with two Everton representatives.

Meanwhile, Allardyce has confirmed his interest in signing Steven N'Zonzi from Sevilla but admits he would have to shift one of the many central midfielders already on Everton's books first.

Allardyce worked with the midfielder during his Blackburn Rovers days and is keen to link up with him again but the Blues are well stocked for central midfielders.

“I would take Steven N'Zonzi tomorrow,” he said. “He is one of my better buys in my lifetime.

"Knowing him from that age and knowing him now, yes I would like him but with the amount of midfield players I have at the moment I'd have to move some player out to bring a player like Steven in.

“I would consider every offer and, if it is the right offer, I would recommend to the board that we take it and utilise that money on what we might bring in. I'd have to say that caution is my first priority in this window.

"For me it would be much wiser that the club tries to get through until the end of the season and readdress what we are about to do during the summer. It is much better operating then than it is in this very difficult window.”