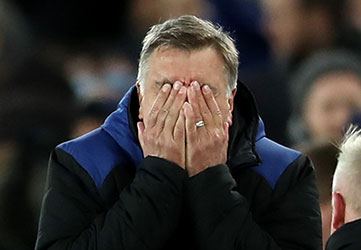 Everton suffered further humiliation at Arsenal's hands, conceding five goals to the Gunners for the second time this season on the back of another horrific performance.

Aaron Ramsey set Arsene Wenger's men on their way as early as the seventh minute, eventually helping himself to a hat-trick, Laurent Koscielny made it two and Pierre-Emerick Aubameyang scored on his debut, albeit from a clearly offside position, as the Blues leaked four first-half goals for the first time in the Premier League era.

Meanwhile, Dominic Calvert-Lewin came off the bench to score a fine consolation goal but there was nothing that could put any gloss on another dreadful visit to the Capital for Sam Allardyce's men.

Despite overseeing a long-overdue victory over Leicester City on Wednesday evening, the Everton boss made another slew of changes, with Seamus Coleman and Phil Jagielka making way for Jonjoe Kenny and Ashley Williams, and new signing Eliaquim Mangala making his debut in a five-man defence.

Morgan Schneiderlin came back into the side at Wayne Rooney's expense, Yannick Bolasie replaced Gylfi Sigurdsson while Tom Davies was sacrificed to make way for a formation apparently aimed at containing Arsenal and trying to hit them on the break.

The strategy backfired, however, as Arsenal cut through Allardyce's defence seemingly at will during the first half. The Blues were under the cosh early and after the home side kept the ball following a blocked Mezut Ozil free kick, Henrick Mkhitaryan fired a low cross into the six-yard box and Ramsey turned it past Jordan Pickford.

The Armenian fired just wide as Michael Keane backed off him four minutes later before the Gunners doubled their lead from a 14th-minute corner. Shkodran Mustafi flicked on at the near post and Koscielny stole in ahead of Mangala to convert a stopping header.

It was 3-0 before 20 minutes had elapsed, Arsenal waltzing through the centre of Everton's midfield with ease before Ramsey's effort from 25 yards took a deflection off Mangala that meant Pickford couldn't prevent the shot from finding the net.

Everton briefly rallied with Cuco Martina shooting wide and Theo Walcott almost grabbing a goal on his first return to the Emirates since his move to Merseyside but Mustafi's saving block denied him after he had sprinted clear onto Oumar Niasse's lay-off.

Aubameyang might have scored in the 32nd minute when Keane missed a tackle deep in Arsenal's half and the Gabonese international raced away but his shot was saved by Pickford.

It merely delayed the inevitable, however; Mkhitaryan's deft pass put Aubameyang in behind an Everton defence vainly appealing for an offside flag that should have gone up but never did and the striker clipped the ball over the goalkeeper to make it 4-0.

The horrendous almost got worse three minutes after that but Nacho Monreal's header came back off the post and his follow-up shot a few seconds later after Mkhitarian had crossed from the right once more hit Keane and bounced wide.

Allardyce responded to the carnage by belatedly hooking Keane and introducing Davies at the interval and Niasse came within inches of reducing the arrears six minutes into the second half. Walcott swung in an excellent ball from the right at which the striker flung himself but his prodded effort hit the post.

A goal for the Blues did come in the 64th minute after Walcott, in a reflection of the futility of the game from Everton's perspective, had been withdrawn and Calvert-Lewin had come on in his place. Good work by Davies ended with Martina crossing from the left to pick out Calvert-Lewin who headed home with aplomb.

Any prospect of an improbable revival was killed off by Ramsey who finished off another easily crafted Arsenal move by sweeping home his third with 15 minutes to go.

The result ensured that Arsenal's historical tally of victories over Everton, 95, is the most by any team over another in English football. That might owe to the longevity both clubs have enjoyed in the top flight and the number of times they have played each other but it also underscores the dominance the Gunners have enjoyed in this fixture.

Everton's wait for a victory on Arsenal's home turf stands at 22 years and, on the evidence of the two sides' meetings this season, it could be another 22 before they taste victory on this ground.