Everton bounce back with comfortable win over Palace 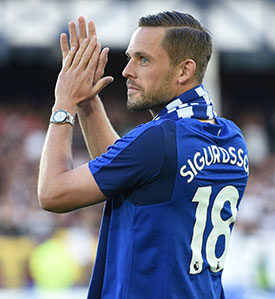 Everton cruised to a rare routine victory as they over-powered Crystal Palace with three second-half goals.

Having dominated without finding the breakthrough, the Toffees broke the deadlock in the first minute of the second half through Gylfi Sigurdsson and were quickly 2-0 up through Oumar Niasse.

Tom Davies was rewarded with his first goal of the season with 15 minutes to go and while Sam Allardyce's side were unable to preserve the clean sheet following Luka Milivojevic's late penalty, they were good value for the victory.

Allardyce had responded to last weekend's horror show against Arsenal by restoring almost the same starting XI that had beaten Leicester. Eliaquim Mangala was handed his debut in place of Phil Jagielka but the line-up was otherwise the same as 10 days ago.

That meant returns for Seamus Coleman, Wayne Rooney and Gylfi Sigurdsson and it was the Icelandic midfielder who had the first real sight of goal when he flashed a shot a foot or so past the goal inside 10 minutes.

Milivojevic threatened briefly for the visitors when he drove a deflected shot wide before Idrissa Gueye was foiled by Hennessey who palmed his excellent 25-yard effort behind.

Sigurdsson and Rooney struck the defensive wall with free kicks from identical positions as Everton tried to press home their superiority but Palace forced a save from the opposition goalkeeper of their own when Yohan Cabaye's bouncing shot was blocked awkwardly by Jordan Pickford.

Christian Benteke then reminded the Blues of his aerial threat after Mangala had been forced off with a knee injury when Alexander Sorloth capitalised on a rare mistake by Coleman and crossed for the Belgian but he missed with his header.

Coleman failed to reappear for the second half, a muscle complaint necessitating a second change from Allardyce that saw Jonjoe Kenny introduced, but any disruption was short-lived as Everton scored less than 60 seconds after the restart.

Niasse quickly latched onto a wayward header by James Tomkins, knocking it back to Sigurdsson who took one smart touch to set himself before firing a slightly deflected shot past Hennessey to make it 1-0.

Sigurdsson was involved again five minutes later with good hold-up play on the touchline that ended with him playing Davies in. A fortunate bounce fell to Cuco Martina who took time to size up a clipped cross for Niasse who steered a header inside the near post to double the lead.

Palace briefly rallied, Benteke going close with an almost identical chance to the one he buried in this fixture last season when his towering header dropped inches wide before his strike partner Sorloth missed with a headed chance of his own.

But Everton weathered the storm and extended their lead through Davies. The impressive Theo Walcott's cross was diverted into the path of Kenny by an errant touch from Tim Fosu-Mensah and the young defender's low cross was turned goalwards by Niasse.

Hennessey clawed his bobbling shot away by his right-hand post where Sigurdsson had followed up to cut the ball back into the six-yard box and Davies converted from close range to make it 3-0.

Allardyce then withdrew Gueye due to a slight know, his choice of Morgan Schneiderlin as a replace greeted with boos from some among the home crowd, befere Palace grabbed what proved to be little more than a consolation seven minutes from time.

The win, their second of 2018, moves Everton to within two points of seventh-placed Burnley ahead of a warm-weather training trip to the Middle East that will take advantage of a fortnight's break in the Premier League schedule to accommodate the FA Cup 5th Round.