Tosun happy to finally be settling in England 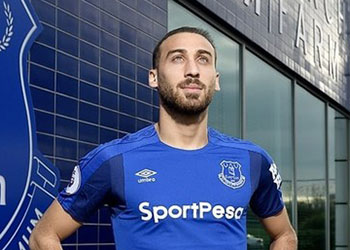 Cenk Tosun was in positive mood in the wake of Everton's 2-0 win over Brighton yesterday as he basked in his second goal since joining from Besiktas.

The Turkish international struck 14 minutes time to double the Blues' lead and effectively put the game beyond the Seagulls a week after opening his account in the 2-1 defeat at Burnley.

Tosun spoke to evertonfc.com after the game to describe the feeling among the camp following the win and how well he feels he is now settling into his new club after a slow start to his Premier League career.

“We played really well today,” the striker said. “For 90 minutes we were strong and played better than Brighton. We deserved the win.

“In the first half we played well but didn't score. We missed clear chances but in the second half we were better and scored two goals.

“We always want to win at home and thankfully today we have taken the three points. We have been really good at Goodison but we know we have to be better away. Hopefully that starts at Stoke.

“I scored my first goal for the club last week but I was disappointed to lose the game. This week was better because we won.

“I was worried it was going to hit the crossbar and bounce back out! Thankfully it was wet out there because that has helped the ball go in.

“I feel good physically. I feel like I have settled into England as well and I hope I can keep going like this and keep scoring goals.”