The injury that Ashley Williams suffered in Pasadena last Monday has required surgery that the Welsh international underwent in Los Angeles this weekend.

Williams was forced out of the goalless draw with Mexico after just 20 minutes, with subsequent x-rays showing that he sustained two fractures to two ribs which punctured and collapsed a lung.

The 33-year-old posted pictures to Facebook from his Beverly Hills hospital where he had his operation, writing:

"Crazy couple of weeks. Great to be back in a Wales shirt and with the lads. However, after coming off after 20 mins with multiple breaks on two ribs, I went to hospital and found out I had punctured my left lung which led to it collapsing." 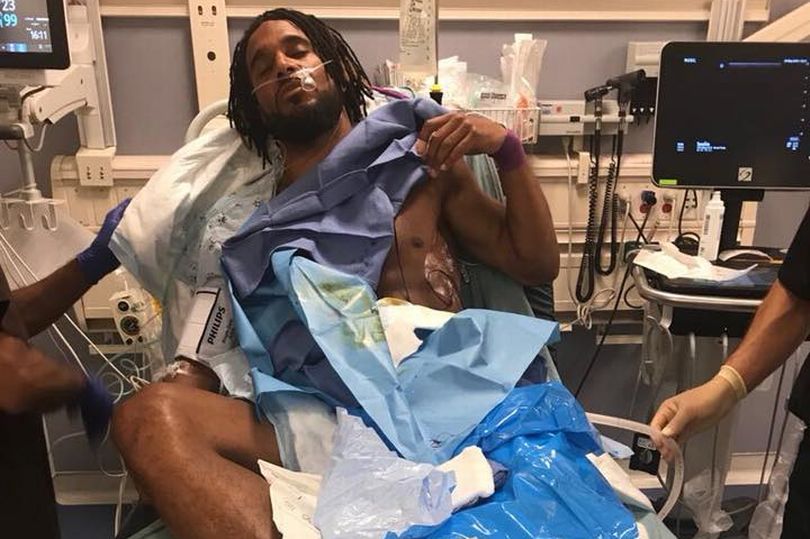 
Paul Kossoff
2 Posted 02/06/2018 at 22:54:50
Captain Ashley Williams has revealed he suffered a punctured lung which then collapsed during Wales's goalless draw with Mexico on Tuesday.

Williams, 33, also suffered "multiple breaks" on two ribs after colliding with Javier Hernandez and was substituted after just 20 minutes.

It was the Everton defender's first match in almost three months.

"Look forward to flying home and resting up now before the new season," Williams wrote on Facebook.

"[A] crazy couple of weeks. Great to be back in a FA Wales shirt and with the lads.

"However after coming off after 20 minutes with multiple breaks on two ribs, I went to hospital and found out I had punctured my left lung which led to it collapsing."

Hope he makes a speedy recovery, and I wish him all the best.

He played all season like he had a punctured lung.

Maybe Swansea will want him back – they have a history of bringing back former players. Possibly swap him for Mawson, with a bundle of cash?

I wish him a speedy recovery and I also hope he has a good end to his career at another club. I could see a newly promoted team come in for him.

I'm actually looking forward to the summer clear-out, I hope Silva is brutal as there are around 10 first team players I'd be moving on.

Jack Convery
20 Posted 03/06/2018 at 13:40:26
Excellent interview with Nigel Martyn on TMS right now.
Harry Wallace
21 Posted 03/06/2018 at 13:53:34
TMS?
Peter Fearon
22 Posted 03/06/2018 at 14:39:52
I'm guessing Test Match Special. This injury is a good excuse for Ashley Williams to hang up his boots and look for work in coaching or management. You get your normal lung function back but a 33-year-old athlete with lung trauma? Claim the insurance lad!
Ajay Gopal
23 Posted 03/06/2018 at 16:15:32
A bad end to a poor season for Ashley. This was the season when everything went wrong for him, but he never hid. If anything his mistakes seemed to stem from trying too hard. Perhaps indicative of a precipitous drop in speed or power. Like Distin's last season.

I wish him a good recovery and a respectable end to his career, wherever that may be.

Why some posters think it is hip to knock people when they are down is beyond me.

This is a very serious injury and I am sure all true Evertonians wish him well.

Brent Stephens
26 Posted 03/06/2018 at 18:42:27
Ajay and Jay, agree fully.
Rob B Williams
27 Posted 03/06/2018 at 18:53:38
My mother fractured her ribs, her international career was over after that but she went on to play a mean game of snakes and ladders for years afterwards. Frustration was another game I remember her playing. So Ash, the future is bright... forget football – especially blow-football – with that lung problem.
Jamie Evans
28 Posted 03/06/2018 at 20:48:08
Sounds like a really nasty injury so hopefully he gets himself in good health asap.

Maybe stay off ToffeeWeb if you need cheering up though, 'eh, Ash.

Ashley has had his ups and downs in a blue shirt, but I echo the remarks of Ajay, Jay and Brent, and wish him a speedy and full recovery.

Paul Mackay
31 Posted 03/06/2018 at 21:52:07
I broke a rib playing footy and there is no fix other than plenty of rest, it's very painful too. I couldn't play for about 2 months, so probably longer for Williams given the lung etc.

We won't be able to sell him in this window!

How things can be spun to make things seem a crisis.

"The 33-year-old posted pictures to Facebook from his Beverly Hills hospital where he had his operation."

I work in the ICU as a Registered Nurse and have done so for 15 years. I have 28 years experience as an RN.

This was not an operation – it was a simple "procedure" that requires local anesthesia only. It is performed many times daily in any Emergency Department, ICU area, even in Radiology Departments. The procedure takes less than 10 minutes from start to finish.

Once the chest tube re-inflates the lung, it is removed as quickly as possible, usually within less than a week. To call it a serious injury is overkill.

The picture makes it look serious but that is only due to the fact a large sterile field has to be established. Look at his left chest wall and you see a small chest drainage tube no larger in diameter than 5mm.

Talk about putting a spin on things...

If you have, then your comments are acceptable. If not, you have no idea. Treating things does not make you an expert on what they're like to suffer from.

However, I hope all Evertonians would join me in wishing him a speedy recovery and hope he's able to return to playing and have a respectable end to his career, wherever that is.

This is where tactics comes into it though. Ashley Williams is (or was) a fantastic edge-of-the-box, under-the-cosh type defender.

Make him part of a high-line defence and he looks awful. He's lost his pace and so he wants to play deeper and deeper. This is the opposite of what we wanted from him last season and why he did well in a few games when we actually played all out defensive football.

We should palm him off on a relegation-battling side that could make the most of what talent he has left.

Many fans were calling for Stones to go so we could get a defender who 'put it row Z'. Well we did -– and a fat lot of use that was!!!

James Marshall
42 Posted 04/06/2018 at 12:23:03
Ouch. The challenge looked like nothing but I have broken a couple of ribs playing football and it's really very unpleasant. I didn't puncture a lung and can only imagine how that feels (I smoke quite a bit so have some idea!).

He may not have had a very good season for us last year, but he always tried hard – as someone said above, maybe too hard hence all the mistakes.

It's a shame as I always thought he was a beast of a defender. I'm sure he'll be fine though, which I think is the point of Gary's (the nurse) point above.

Gary, if I was the Everton manager, then I would definitely be finding a job for you in the treatment room!

I remember getting Tuberculosis in my twenties, and was honestly never the same again. I know this is different, but the lungs are such an important part of our body, with regards to fitness, so I hope Ashley, makes a full recovery and can go and finish his career back at Swansea.