When the Easter sun comes shining through 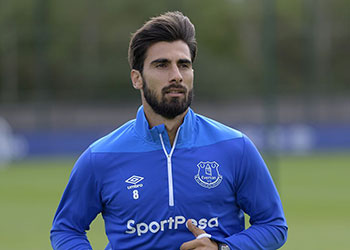 Everton produced a superb performance in their penultimate home game of the season, hammering Manchester United in the Goodison sunshine.

Michael Keane returned with Phil Jagielka dropped. Morgan Schneiderlin was the chosen replacement for André Gomes, who started a three-game retrospective ban for his late foul at Fulham, caught on video.

After a slow start, and a burst of speed from Barnard that ended in an overhit cross, an early corner ended harmlessly in De Gea's arms. Calvert-Lewin got a second corner off Jones but it was directed away from goal. A slightly better attack down the right threatened briefly but came to nothing.

A neat piece of skill from Sigurdsson drew a foul from Fred, a little too far out. Richarlison could not reach the looped ball but won a third corner, which finally came back for Richarlison to force a good save from De Gea when he should have scored, driving the rebound wide.

Everton were dominating the early play and it paid off, a great long throw-in from Digne on the left, Calvert-Lewin headed on under pressure and set up a moment of supreme skill from Richarlison to loft it firmly into the roof of the net past a despairing De Gea. Tremendous start from the Blues!

Everton continued to pressure: another corner, this time from the left, it came back to Digne and he won the 7th corner, in a great spell of relentless pressure until Sigurdsson drove the ball out behind Digne. Man Utd played the long ball but Rashford could not convert it.

A poor ankle-tap by Gueye saw an early yellow card. Rashford went for goal from 40 yards, over Pickford's bar. Fred caught Calvert-Lewin with an equally bad foul but, of course, no card shown to the offender from the top-six team.

Man Utd won their first corner but from it, Everton broke well and Sigurdsson fired a superb strike low past De Gea off a square ball from Guey , a wonderful shot, to put Everton 2-0 up. Excellent football from Everton.

The tempo slackened a little, allowing Man Utd to try another long ball, this time directed at Lukaku. But the turnover saw Everton advance with energy again, winning yet another corner and more pressure ensued, the Blues continuing to dominate.

Richarlison forced a turnover from De Gea's weak play out, and he tried to make space for the shot but drove at De Gea. Richarlison was fouled in a good position but Sigurdsson's trajectory was too low. Still, Everton won the ball back and pressed forward again.

Some uncharacteristic scrappy defending from Zouma preceding Richarlison going down for treatment on his ribs, hurt in a tussle with Matic. 2 added minutes became 3 as the whistle blew on a fine first half from the home side.

Fred did not reappear for the visitors. And Richarlison collapsed again, Walcott replacing him this time. Bernard again turned on the afterburners and delivered an enticing cross that evaded three blue shirts. A really competitive, almost scrappy spell ensued, with Everton fighting for every ball.

Calvert-Lewin and then Sigurdsson both shaped to shoot but it was another corner, that De Gea punched out and Digne caught beautifully on the volley at the edge of the penalty area, driving it hard and low past the Manchester United captain and into the back of the Gwladys Street net. 3-0 and comfortably sailing...

Calvert-Lewin was next to threaten, Smalling denying him at the expense of a corner, a fantastic one that almost went straight in but for the alertness of de Gea to clear it off the line with his foot.

Some brilliant work by Sigurdsson down the left played in Walcott through on goal who nonchalantly passed the ball into the net beyond a livid David De Gea... 4-0 and Goodison in rapture.

Rashford tried a dive under pressure from Coleman and McTominay ended up with a yellow card from Paul Tierney. Martial got free and looked to score but drove his shot wide.

There was a beautiful spell of olé football, slick accurate passing from the Blues that had the washed-out Man Utd shirts chasing shadows, the ball coming to Walcott who did not quite connect well enough. At the other end, Matic drove wide before there was a massive welcome for James MacCarthy, who replaced Gueye.

A bit of pressure for the Everton defence to deal with saw Keane head behind. Sigurdsson set Bernard on another run but Calvert-Lewin horribly miscontrolled a simple ball and a golden chance to make it five evaporated.

Coleman did his best to get that fifth, smacking a difficult shot with his left foot straight at De Gea. Digne went down after Pogba unknowingly stood on his instep. Ademola Lookman was coming on, but instead, it was Phil Jagielka who came on, accepting the captain's armband from Seamus Coleman.

After a brilliant cross was defended equally well by Coleman, Pickford chased the ball down and seemed to foul Martial? outside the area. Then, Man Utd had their first shot on goal, in minute 86, Pickford picking off Martial's low drive.

Everton still had to defend as 4 minutes of added time went up, Lindeloff shoving over Walcott needlessly, allowing Everton time to regroup around the Man Utd area but it was defended away by Romelu Lukaku, a peripheral figure for Man Utd — who, it is said, has never been replaced since he left Everton. Based on his lackluster performance for the so-called Red Devils today, and the fact they are talking of selling him, that cry sounds a little hollow

The Blues played out the 4 added mins without claiming that 5th goal their excellent performance deserved in the beautiful Goodison sunshine. Happy Easter!!!