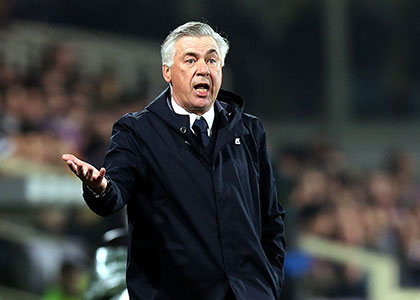 Everton found a vital moment of quality and scratched out a narrow 1-0 victory to mark Carlo Ancelotti's first match in charge at Goodison Park.

The Blues had been struggling to break down a typically obdurate Burnley back line in a fashion very reminiscent of Marco Silva's reign but Djibril Sidibé and Dominic Calvert-Lewin combined superbly with 10 minutes to go, with the latter scoring a wonderful diving header.

Ancelotti made two changes to the team that had been hold goalless by Arsenal five days ago, bringing Seamus Coleman back into defence and replacing the injured Alex Iwobi with Bernard. And it was the diminutive Brazilian who was at the heart of some of Everton's best moments as they dominated the game in the first half.

The first and best chance before the interval fell to Mason Holgate following a set-piece, however, when Yerry Mina won a header and the ball fell to his defensive partner in front of goal but goalkeeper Nick Pope made an excellent point-blank save.

Coleman was put in by Richarlison but he delayed his shot and the chance went begging before Bernard accelerated into the opposition half and picked out Sidibé but Pope stopped his shot with his foot and the rebound bounced the wrong side the post off Calvert-Lewin.

Chris Wood headed over unchallenged at one end and Calvert-Lewin despatched a similar chance into the stands at the other as the half ended goalless.

The second half failed to produce the offensive penetration that Ancelotti no doubt would have wished to see and only Bernard's deflected effort, Coleman's speculative effort that drifted narrowly over and tame headers at the keeper by Calvert-Lewin and Mina threatened to break the deadlock.

The breakthrough came, however, in the 80th minute. Gylfi Sigurdsson won the ball in midfield and played Sidibé in down the right flank and when he swung in an excellent cross, Calvert-Lewin threw himself at it and guided it home off the far post.

That was all the Blues needed against an unadventurous Clarets outfit and they were able to see out the game to hand Ancelotti his first points.