A Knight of the Round Table at Inside-Left?

Did you know that Everton once employed a player with the Christian name of a mythical legend?

Scouring old newspaper reports, statutory records, census returns and history books while working through and cross-checking the relevant dates and stories of the men who played for Everton in years gone by turns up all sorts of interesting events, tangents and curiosities. The full names of a number of those who turned out in the early colours and patterns of Everton jersey on the various strips of grass that the club called home, and several who ran out in blue in the first half century or so at Goodison Park, really stand out.

Names which, when read in full, conjure images of heroes of old fashioned novels, or adventure stories. Indeed, many of the true stories of these and many other Everton old boys are stranger than fiction at times, when you delve a little deeper.

Did you know that Everton once employed a player with the Christian name of a mythical legend?

Lancelot Johnston was born on 2 October 1893 in the Jarrow area and played in his teens for Cambois United, before joining Blyth Spartans and making his debut in an F.A. Cup tie at Spartans’ Croft Park ground on 12 May 1912, against another local club, South Shields. Six months later and after only seven appearances for Blyth, Everton signed him for a fee of £100, on 23 November. £25 of the fee went to Cambois United, as recompense for their development of the player. At Goodison, Johnston joined Alan Grenyer, a stalwart in the Toffee’s first team for over a decade either side of WWI and a North Shields native. Bob Thompson, a Geordie and future Everton captain would arrive within a year.


The northeast was proving a conveyer belt of talent for Everton, one which would continue to serve the club well, with the likes of Warney Cresswell, Harry Catterick and Howard Kendall also treading the path from historic County Durham to stardom in Liverpool 4.

After twelve months spent making his way in the reserve team, Lance Johnston made his Everton debut on 18 October 1913, in a 4-1 defeat at Sheffield United. He marked the occasion by scoring Everton’s goal to give them a chance at 2-1. Appearing at inside-left in the next six league fixtures, he scored his second goal for the club in another 4-1 reverse, at White Hart Lane versus Spurs on 22 November. After missing four games, Johnston returned for the Christmas Day fixture at Old Trafford. Everton won the match 1-0, but Johnston was carried off with a compound fracture of his right leg after 35 minutes. 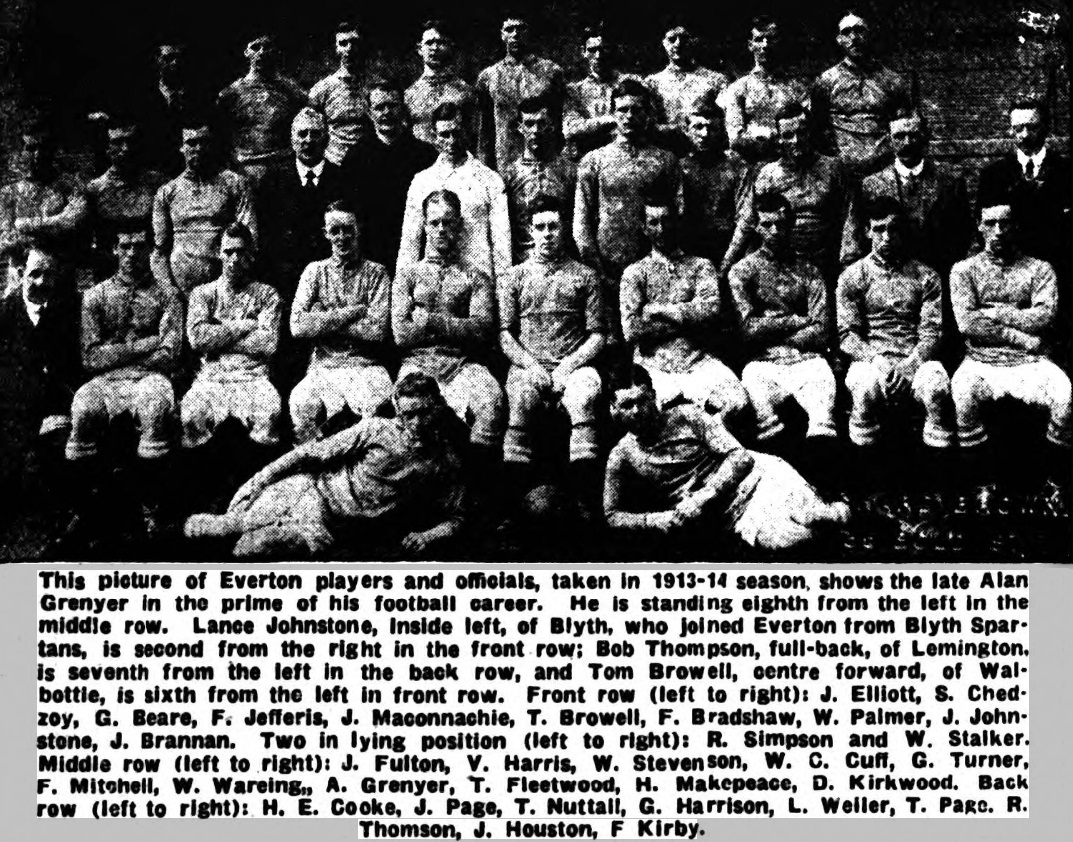 In the aftermath of the injury, according to the Everton F.C. minute books, the board of directors agreed that the club would ‘pay £1 per week towards Johnston’s maintenance’ during his stay at Manchester Royal Infirmary. They had also increased his salary by ten shillings per week until further notice, the extra payment ended in March 1914 and an invoice was paid by the club to the hospital. On 14 July 1914 the Everton club secretary read a letter to the directors, from Johnston, which reported ‘steady progress.’ Without the benefit of modern-day treatment and rehabilitation, we can only guess as to what state his leg was in and how likely it would have been that he might have made a full recovery. Regardless, World War broke out 28 July 1914.

In a flash a promising football career was over. Before he had time to recover, WWI broke out. A Liverpool Echo report on 4 January 1917 - three years later - details Everton players George Harrison and Billy Kirsopp passing their medicals and joining teammate Sammy Chedgzoy in the Scots Guards. They would travel south to join up with their regiment, likely to offer their football services during wartime to Crystal Palace and Clapton Orient. The piece closes with the news that ‘Lance Johnston was sent back to his work on account of his bad leg, the legacy of a Christmas match at Manchester some years ago.’

A few newspaper snippets from Johnston’s short career in the Everton first team had hinted that he was highly regarded by the Everton selectors. A week after his Everton debut in October 1913, the Morpeth Herald, back home in the north east, reported that ‘Lance Johnston is spoken of as being a permanent member of the Everton forward line.’ Another north east publication, The Blyth News of 3 November 1913, stated ‘Lance Johnston has got his chance for Everton, and he is making sound use of it. The “Athletic News” speaking of his performance on Saturday against Bradford City, says: “The best of the line was Johnston, whose skilful touches to the players on either side of him were most judiciously executed.’ Just a week after the leg break which would end his career, a line in the Football News of 3 January 1914 stated ‘Everton regarded Lance Johnston, their reserve inside left, who broke a left at Old Trafford, as their most promising young forward.’

Still only 25 when the War ended, Johnston settled on Merseyside and took a job on the docks, progressing to the role of foreman. Another Blyth News article, from 8 June 1931, reports on an injury suffered at work to a well-known local boxer, “Tiger” Smith, real name W. Johnston, the younger brother of Lance, who was employed at the Crofton Mill pit in Blyth. By coincidence, the article states, only recently Lance Johnston had escaped being crushed by a pair of moving vehicles while at work on the Mersey docks: ‘…it was only by quickly extricating himself from his perilous position that he was saved from very serious injury.’ Perhaps the nimble toes which had served him so well on the football field still contained a little stardust.

A classic tale of what might have been. A glittering career and the nickname Sir Lancelot could have been forthcoming from an adoring Everton faithful. As it was, injury and wartime colluded and the Everton record books contain only the smallest of footnotes, marking a playing career of eight appearances, two goals, two wins, two draws, four defeats.

Lancelot Johnston died on 24 June 1974. In the 1929 Voters Roll, he and wife Elsie, who were married in Carlisle in 1927, are living at 10 Ireton Street, off County Road, a stone’s throw from Goodison Park. By the time of the 1939 England and Wales Register, the couple are resident at 63 Coronation Drive in Crosby, where they lived for the rest of their lives, Elsie predeceasing Lance by four years.

Re: 3, I think I might have seen a piece on Cuthbert Tatters, Carl, possibly by Billy Smith or in a copy of George Orr's late lamented fanzine 'Blue Blood'.

I was reading the History of Everton from 1878 - 1928 recently which is full of interesting facts and these stories about former players are just as wonderful.

Even in my lifetime (55 years), there have been great developments. Mark Higgins had a career-ending injury circa 1983 and Everton's insurance paid out, but then he turned up at Man Utd a year later as surgeons had worked out how to fix it.

Interesting with the guy from Blyth joining Everton in 1912 for a fee of £100. There must be somebody on here who could work our what the £100 would be in today's money just based on inflation, not the silly money!!

Find out how to browse ad-free and support ToffeeWeb
© Jamie Yates. All rights reserved.