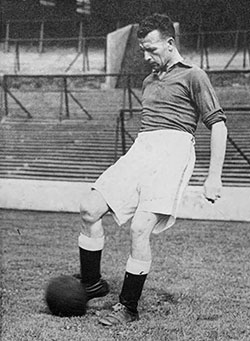 Harold Finnis is one of 90 players, to date, to make a solitary first team appearance for the Blues in peacetime football. He was born in 1920, the second-youngest of nine children, and started playing football whilst attending Kirkdale’s Daisy Street School. At the age of 14 he was selected to play for Liverpool Schoolboys representative side and, after leaving school, joined Everton as a junior. He was a regular for the club’s ‘A’ team and was called up to make his senior debut in a wartime fixture in November 1940, playing at left-half in place of Gordon Watson in a 2-1 defeat by Bury at Gigg Lane. It was quite a step-up for Harry and the match report noted: ‘Finnis’s lack of experience resulted in Bury’s right flank having too much room in which to work.’ Later that season, he made his second, and final, wartime first team outing at centre-half - a 5-3 thriller in which Everton emerged victorious at Haig Avenue.

During the war Harry enlisted with the RAF and served in Egypt, Palestine (as was) and Iraq. In November 1944, Alf Anderson, the Third Lanark player who had guested for Everton during the War, sent an ‘airgram’ to the Toffees directorate ‘eulogising the great play of this half-back in Palestine’.

On being demobbed Harry was finally able to turn professional for the Blues. A glut of injuries to the likes of T.G. Jones and Norman Greenhalgh saw Harry called up for his Football League debut for the trip to Leeds United on 9th November 1946. There was a cold wind blowing down the pitch but it was a baptism of fire for Harry in an unfamiliar left-back position. The game started in dramatic fashion when a cross by Grainger hit Harry on the arm. The referee signaled ‘play on’ but, in response to vigorous protests from the Leeds players, he consulted the linesman and awarded a spot kick. To Harry’s relief, Milburn blazed his goal attempt over the crossbar. It would be a testing match for both full-backs against the Leeds speed merchants on the flanks. Although Ephraim ‘Jock’ Dodds had got the Blues level, the Elland Road outfit scored a late winner. 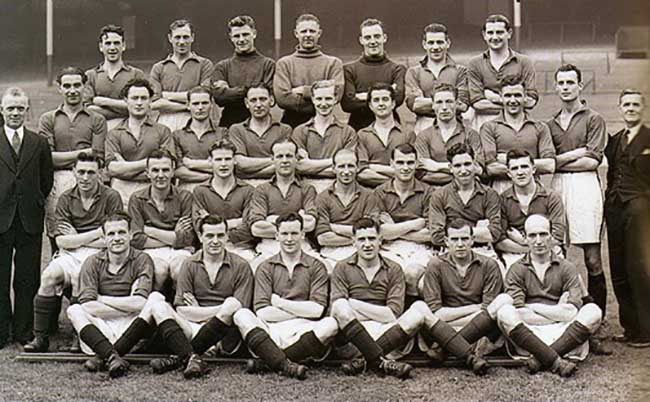 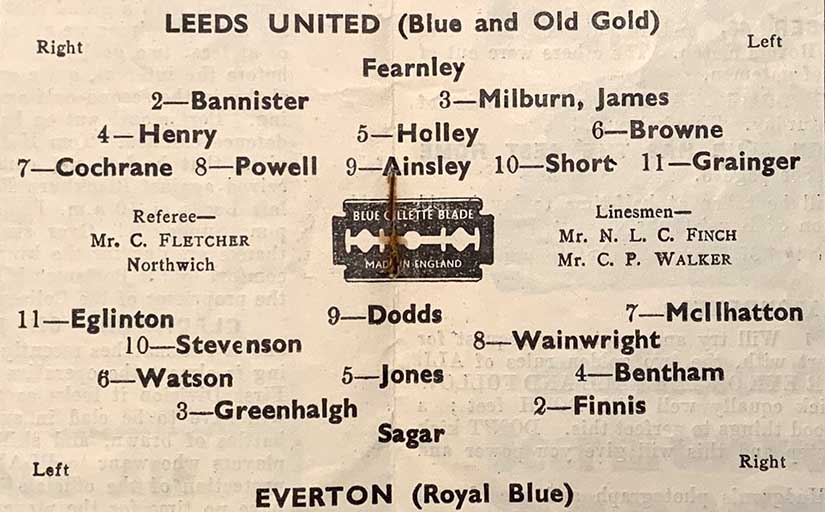 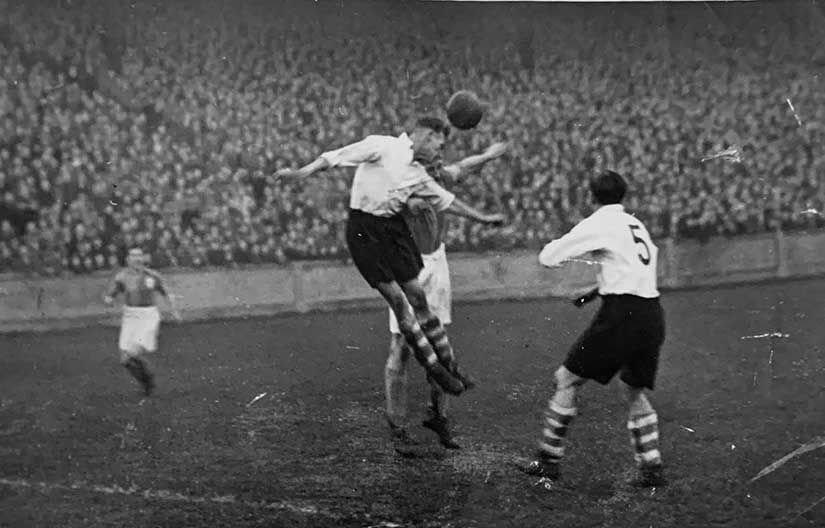 Harry in action vs Leeds United

Harry returned to reserve team football but picked up a nasty groin injury which could have been treated easily nowadays but made it difficult for him to walk for 12 months. It ended his playing career. He was released by Everton in the summer of 1947 and joined D.R. Weir, a firm of builders’ merchants and ironmongery which was based on St. Anne Street. Harry worked there until he retired in 1985. This was not the end of Harry’s links to Everton, however, as he served for 25 years as a match day steward for Goodison Park matches, including during the 1966 World Cup.

He and his wife Hilda lived in Litherland and raised three children (Geoff, Sheila and Norman). Harry died on 9th February 1991 after a long illness, following a stroke. He is sadly missed by his friends and family who describe him as being a gentleman with a lovely personality.

One of Harry’s grandchildren, Ian, was a PGA professional Formby Hall Golf Club and, in 2016, became caddy to his old friend, and fellow-Evertonian, Tommy Fleetwood. They have since enjoyed great success together. In 2013, in Crosby, Ian married goalkeeper Rachel Brown who had won the FA Women’s Cup with Everton in 2010 and also represented England (82 caps) and Team GB in the 2012 Olympic Games. Rachel has since retired from playing and now focuses on the media side of the game. Ian and Rachel have two children, so maybe another link to Everton is yet to come.

Thanks to the Finnis family for assistance with this article.


Mick Davies
1 Posted 09/10/2020 at 04:42:48
Another great Everton story: I saw Rachel co-presenting the WSL programme the other night and praising the Blue ladies for going top. Let's hope a future blue, male or female, a product of their union, goes on to represent the Toffees, and it's great to have a talented sportsman like Tommy Fleetwood following our club. Things are just getting better all the time.
Mark Andersson
2 Posted 09/10/2020 at 09:57:41
I love these blue stories.. always interesting and gives you a sense of history and how simple but hard life was back then

John McFarlane Snr
3 Posted 09/10/2020 at 16:27:41
Hi Rob, despite coming from an Everton family (dating back to the formation of the Football League) I must confess that Harry Finnis was just a name in the history of Everton FC as far as I was concerned. I have no doubt that Harry was one in a long line of former players who would be forgotten if it wasn't for people like yourself who bring them to the notice of supporters.

I welcome your articles because they either confirm something that my granddad and uncles told me, or like your latest contribution, they fill in the gaps and provide the recognition that some of these former players deserve. Thank you for your excellent contributions.

I'm not a massive golf fan apart from Ryder Cup but now I always look out for Tommy Fleetwood's fortunes because of his blue connections.

To have actually played for the first team even once is a dream for thousands of us local lads and Harry Finnis not only did this but left his mark on his future generations.

Derek Knox
7 Posted 10/10/2020 at 12:52:54
Great article Rob, so hat's off to you with thanks for that. As a golfer and and a golf fan, I follow the career of Tommy Fleetwood amongst others, but with Tommy being a Blue he get's more focus.

I knew he has had his caddy Ian Finnis since he basically started, a giant of a man 6'5" I think he is, especially looks even bigger next to Tommy, but had no idea he was the grandson of an old Everton player.

It's brilliant that we have what I consider the best fan website, mind you, I am a trifle biased, but when we get articles like this, I have to admire the commitment and research that has gone into them, plus a proud feeling that fellow TW'ers have submitted them for all to enjoy.

These articles you dig up are absolutely brilliant, I know Ian Finnis is a big Evertonian as is Tommy Fleetwood, but didnt know Ians Grandfather played for Everton albeit only once. I love my golf, one of the few sports that is still bye and large governed by the same rules that have been in place for a very long time, unlike football were for years nothing changed now every season there is a new rule brought in. Also a bit like snooker one of the few sports were the competitors call fouls on themselves. Lets hope both Ian and Tommy can celebrate a win in todays final day at the BMW Rolex event at Wentworth. Tommy Fleetwood's iron play yesterday was imperious just a pity his putter let him down otherwise he wouldn't be going into the last round 4 shots behind Tyrrell Hatton.

I will follow Fleetwood with interest now - I didn't know he was a blue and I'm just getting back into golf.