Ancelotti admits team had to sacrifice in order to beat Chelsea 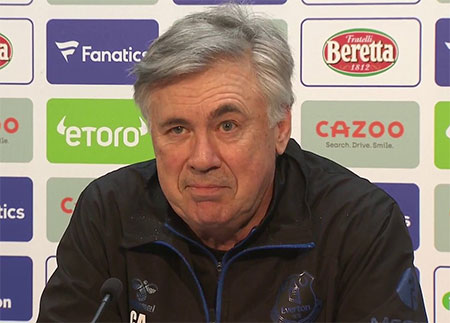 Carlo Ancelotti understandably said he was really pleased after Everton beat his old club Chelsea at Goodison Park this evening to win on home soil for the first time since 3rd October.

The Toffees went top of the table on that date with a 4-2 win over Brighton but a run of just one win in seven since had seen them fall to ninth before Frank Lampard's title-contenders came to town this evening.

However, thanks to Gylfi Sigurdsson's coolly-taken first-half penalty and a terrific all-round defensive performance, Everton beat the Londoners a little over a year after Duncan Ferguson had inspired them to victory over Chelsea prior to Ancelotti's appointment as manager.

Tonight marked the return to the stands of the first 2,000 supporters allowed back into Goodison since the COVID-19 shutdown in March and while small in number, they certainly made their voices heard and roared Everton on to victory.

“[I'm] really pleased,” Ancelotti said of the 1-0 win. “In front of our supporters; they were only 2,000 [but] we are really happy for them,. They have seen a good match for Everton who played well with fantastic spirit.

“Their impact [of the fans] was really strong. We were really pleased.They supported us. It's really important to have supporters — it's totally a different environment.

“Defensively, we did really well; it was fantastic from our midfielders — Allan, Doucouré, Sigurdsson, Iwobi. They worked really hard. The team sacrificed, but that was the target to sacrifice because against a top team like Chelsea you have to sacrifice.

“They did really well and after that [with] our counter-attack we were really dangerous. We didn't concede a lot of opportunities and I think we deserved to win.”


Bill Fairfield
1 Posted 13/12/2020 at 09:15:12
Great to be back at the Grand old Lady,only a couple of thousand fans but great atmosphere,Team worked really hard and deserved their win.
Gary Carter
2 Posted 13/12/2020 at 10:50:14
A proper Everton performance that, full of closing down, passion, grit and quality. Difficult to choose a MotM. Calvert-Lewin, Keane, Godfrey and Allan were immense tonight, closely followed by great performances from Pickford, Doucouré and Holgate.

Now give me the Christmas I dream of and sign Zaha and Alli!

Michael Low
3 Posted 13/12/2020 at 10:51:19
I watched the match on TV and was trying to determine whether the TV station was still playing recorded crowd noises or whether I was listening to the real thing.

I'm pretty sure it was the real “live” crowd singing and I was really impressed at their noise level, it was louder than I sometimes hear when we have a full house!

Great game, it's been a long time coming. COYB

We're just not going to win games carrying players. Something to build on and improve confidence.

Hard work, tenacious, passionate and complimented with quality. All the players didn’t seem fazed by Chelsea and looked like they were enjoying putting in a great shift to win the game.

If we can keep up this work rate we will be a force against any team in the league.

As Gary says at #2, It was a proper Everton performance.

It exemplifies what we are as a club and must become the norm, we must expect it and the base requirement of anyone who pulls on the jersey.

Another thought, I thought Holgate and Godfrey had incredible games playing out of their normal positions. It was great to see Sigurdsson with some fire in his belly. Like a light switch has been turned on in him. Also thought Doucoure and especially Allan were great yesterday. Allan is some player. Iwobi deserves credit for his improvement too, he is getting better by the game.

Minik Hansen
8 Posted 13/12/2020 at 19:18:18
Holgate and Godfrey - the Holy Gate of God Frey in the back. Peacefully, dominatingly keeping goals away from the opposition.
Jason Wilkinson
9 Posted 13/12/2020 at 21:46:45
Ancelotti must find a way to keep 3 at the back. With Godfrey & Holgate it gives us the option to switch to a back 4. We still need more pace in midfield. This could be speed of thought rather than changing personnel.

I thought Gomes played well when he came on. He used his experience to hold the ball and run the clock down. Maybe coming off the bench until he is 100%. Allen, Doucouré and Sigurdsson were composed. Richarlison desperately needs a goal to lift his confidence. Dom ran his socks off with few opportunities. Iwobi did well back on the right.

Pickford got lucky with James's late free-kick. He dealt with everything else with the confidence you come to expect from a keeper. I wonder if Sigurdsson can replicate the magic vs Leicester that he showed when he skinned the opponent and unleashed that 25-yarder. 3 points at the King Power and Arsenal will be crapping themselves.

Justin Doone
10 Posted 13/12/2020 at 23:30:54
The problem is getting the balance right between a solid defence and a more possession based attacking team.

Biggest difference was not conceeding first. Hard work, closing down, working together in combinations and not messing around with the ball at the back should be the basis of all our games.

With 2 slow centre backs we played deep and stayed compact as a team. Simple stuff really and I don't understand why we push up so high in other games.

We need and want space to run forward into to counter or play long balls into. We should set up the same against most teams.

Godfreys pace at the back makes a huge difference to stop so many crosses coming in and preventing runners playing one-two's. Holgate did well too. The natural full backs now have a real challenge to win their places back.

Do we want full backs to defend or attack, thats always a hard question but for me they're defenders. Get forward, find space but don't both over commit.

Players fully committed, fully switched on and playing above their call of duty.
At the end of the day that's all fans really ask for and it makes spineless no-shows against half decent sides all the more frustrating because we know these players are capable of better, hence why I shoot those fans down when they say we don't have the players, we DO have enough players to put performance levels in like Saturday more often.

I agree it was a very Italian performance – score early then defend the lead, which they did very successfully, hardly allowing any shots on target. We need to play like that against Leicester. Don't allow their forwards any space and use the pace of Richarlison and Calvert-Lewin counterattacking.

Now we are back in the hunt, the whole squad should be motivated and confidence restored.

Brian Murray
16 Posted 15/12/2020 at 15:02:46
This backs to the wall type game obviously suits most of our players. No pressure to create or to really try and unlock a defence. Now if we can just build that firm but classy back line of Holgate and Godfrey with the spine of Allen and Dcl we are in business. No talk of maybe next window just do it now. No pressure Carlo. Coyb