Digne return could be a month away 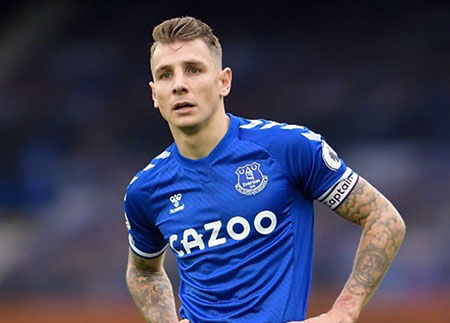 Carlo Ancelotti says that the club have been encouraged by the speed of Lucas Digne's recovery and that he could be back in action by the end of January.

The Frenchman has been out of action for a month after damaging his ankle in training and undergoing surgery to correct the problem on the 30th of November.

Everton initially feared that Digne could be sidelined for three months but he is already well into an individualised rehabilitation programme and on course to return on the earlier end of his projected absence.

There was also promising news on Allan who injured his hamstring in the win at Leicester a couple of weeks ago. He, too, looked as though he was set for an extended spell on the sidelines but Ancelotti suggested that he could be fit by mid-January.

"Lucas Digne [should be back] at the end of January. Ge's progressing really well and he's starting individual sessions and we're really surprised about his recovery," Ancelotti said before the Boxing Day win over Sheffield United.

On Allan, the Italian said: "We're going to have to think about the break after the 12th of January."

Meanwhile, the manager hopes to have both Richarlison and James Rodriguez available for the New Year's Day clash with West Ham.

The Brazilian was ruled out of the last two games of 2020 under the Premier League's concussion protocol after being poleaxed by Eric Bailly in the cup defeat to Manchester United but will be clear by the Blues' first match of 2021.

After tomorrow, James will have missed six matches with a calf problem.


Ajay Gopal
1 Posted 28/12/2020 at 03:16:26
Encouraging news, hope they all come back fresh and hungry to win their places back in the side. Richarlison can’t come back soon enough to provide some relief to DCL who is plodding a lone furrow at the moment. We could mount a serious challenge on the Top 6, if Carlo can find the right balance between attack and defence in the side.
Tony Everan
2 Posted 28/12/2020 at 07:45:56
Great news that these two class players will be back, hopefully, before the end of January. By then, the team will need some reinforcements coming back to keep our charge on track. When you think about the quality that is coming back soon from injury in January: Digne, Allan, James Rodriguez, Richarlison (and who knows what J-P Gbamin will bring to the table?), it will seriously strengthen us.

I still think we could do with a forward player on loan for 6 months. Kean, Tosun, Walcott, and Bolaise will be likely be out of the club; we need one player in, possibly on loan until June, who can make an impact as a sub and to give Calvert-Lewin some respite.

The current lads have been improved and impressive too so there will be healthy competition for places. At a time when other squads will be depleted, it will give us a great opportunity to kick on and really challenge for a Champions League spot.

Why not? I don't see why our players need to fear any of the regular top six, they've all got weaknesses and are more inconsistent this season. Go for it!

Steve Shave
3 Posted 28/12/2020 at 08:14:10
Lemar on loan from Madrid? Carlo seems to have suggested we won't sign anyone, this would fit with Brands's policy but, if we only signed one player, I think a cheeky 6-month loan for the above-mentioned.