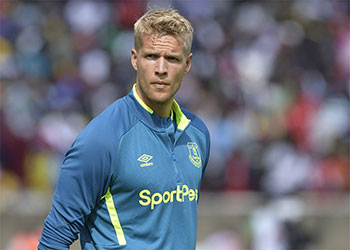 Jonas Lössl has secured his desired move away from Everton, making a permanent switch to his original club, FC Midtjylland.

The Dane had requested a move in the past week after it was made clear that he has no first-team prospects at Goodison Park, especially after Robin Olsen's arrival on loan from AS Roma last October.

Everton had signed Lössl from Huddersfield Town on a free transfer two years ago but he now departs for the club where he began his career back in his native Denmark.

What an incredible waste of time and resources this move to bring Lossl was. Yes, it was a free, but we paid his wages and I’d argue any time spent securing his services could have been better spent elsewhere.

Good luck. He will be the answer to a very tough Everton trivia question in a decade or so.

Are you basing this on his warmups pre match :-)

He was too much of a non-entity for me to even wish him well.

Hard to judge as he's a keeper (they all seem good until they make a mistake) and I only saw him play for Huddersfield on MOTD highlights.

Seemed decent enough as a sub keeper but what we needed and still need (not urgently unless we don't keep Olsen in the summer) is better than Pickford.

Although there's 5 outfield position's too fill first as a priority for me.

Sportrac list his Everton salary at £14,000 per week. Which is only half of what he was reportedly on at Huddersfield. And there were indeed media rumours that had been doubled by Everton. Halved, doubled... Same difference.

It's probably a case of believing whatever you want to believe!