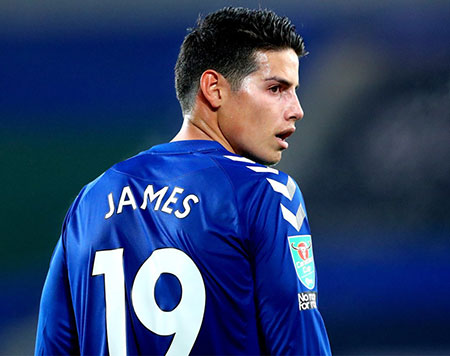 Everton threw away another two points at home and dampened talk of them sneaking into the top four this season as Crystal Palace punished them for a slew of missed chances to grab a late draw.

True to form this season, Carlo Ancelotti's side tried to hold on to a vulnerable 1-0 lead once James Rodriguez's precise finish had finally put them ahead after a combination of profligacy from Dominic Calvert-Lewin and Richarlison and an excellent performance from Vicente Guaita in the Palace goal had kept things goalless for 55 minutes.

However, the Toffees' defence was opened up all too easily with four minutes left of the 90 and substitute Michy Batshuayi drilled past Robin Olsen to wreck Everton's hopes of drawing themselves back onto the shoulders of the top six.

With midfielder Allan ruled out with what was, in the manager's words, a “small problem”, Ancelotti opted for a three-man central defence of Mason Holgate, Yerry Mina and Michael Keane in front of the returning Robin Olsen and paired Tom Davies with André Gomes in midfield behind the roving Rodriguez.

Lucas Digne and Seamus Coleman operated as wing-backs when the Blues went forward and the skipper played in integral part in what was a more effective team performance going forward once Everton had settled following another questionable start.

The visitors were the ones moving the ball around more effectively in the opening stages and Mina had to block an early shot from Wilfried Zaha but it was the hosts who looked to have created the first genuine opening when Gomes split the defence with a pass for Richarlison but he was eventually flagged offside.

In what would be a harbinger of failings to come, however, Richarlison contrived to make a mess of the chance before the whistle blew, cutting a square pass behind Calvert-Lewin and out of his strike partner's reach.

At the other end, Jordan Ayew and Eberechi Eze exchanged passes neatly inside the box and the latter forced a first save from Olsen before Everton squandered a succession of opportunities of their own. First, Holgate picked Calvert-Lewin out with a brilliant ball over the top in the 20th minute but instead of trying to lift it over the advancing keeper, the England international fired straight at him.

A minute later, Coleman crossed for Richarlison but he mis-timed the header and it dropped over before Gomes threaded him in a couple of minutes after that but the Brazilian was foiled by Guaita, first with a one-handed save and then when he tried to dribble around the Spaniard who pounced on the loose ball with Calvert-Lewin begging to be found in space a few yards away.

Two minutes after that, Rodriguez deftly brought down another Coleman cross from the right but couldn't keep his half-volley down and it sailed over the crossbar.

The Toffees' rhythm was briefly interrupted by the loss of Gomes to a hamstring injury after half an hour but, after Gylfi Sigurdsson had replaced him and Holgate had blocked a shot from Christian Benteke, Everton finished the first half on the front foot.

Richarlison insisted on taking a direct free-kick after he was tripped by Cheikhou Kouyaté but curled his effort over, James narrowly missed with a low shot that skidded past the far post, and Richarlison planted another header over following another free-kick, this time from the right flank.

While the front two had failed to find the clinical edge needed to break the deadlock for the Blues, Rodriguez provided it 10 minutes into the second half. Guaita was there again to foil Sigurdsson and turn the Icelander's shot to the side but Coleman collected it and laid it back to James who placed an unerringly accurate through the gap and in off the post to make it 1-0.

Calvert-Lewin had a great chance to double the lead just a couple of minutes later but was denied by the goalkeeper yet again and it was after that that Ancelotti's men began to sit back and try to manage the contest with a more defensive posture.

Eze had a shot parried away by Olsen, Davies's mistake in midfield went unpunished as Zaha's low drive was safely smothered and the Swede was also equal to a decent effort by Ayew all in the space of three minutes. But it was when Coleman went off, to be replaced by Ben Godfrey, and the tiring James made way for the long-awaited return of Jean-Philippe Gbamin that Everton lost some of their shape and defensive discipline.

It might not have mattered had Richarlison made better contact with Digne's cushioned lay-off of a deep Calvert-Lewin cross and Guaita not tipped the Brazil international's bobbled shot over the bar with nine minutes to go but Palace sounded the warning in the 83rd minute when Zaha passed to Jeffrey Schlupp and the substitute dragged his shot across goal, and then when Mina had to put in an excellent lunging tackle to deny Batshuayi.

But the Toffees were undone when one ball too many was allowed to be played straight through their midfield, this time to Schlupp just outside the box and, when he played it on to Batshuayi, the Belgian made no mistake with a powerful drive across Olsen into the far corner.

Everton still had the chance to win it with two minutes to go when Calvert-Lewin threaded Richarlison in but Guaita palmed away the effort that was searching out the bottom corner, while Olsen had to be alert to foil Jean-Philippe Mateta in stoppage time.