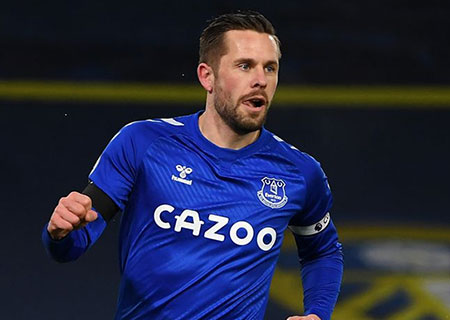 Gylfi Sigurdsson scored both of Everton's goals, including a sublime second that might well have proved to be the winner had the Blues not shot themselves in the foot at the other end

Everton failed to win for the fifth match running and saw the lights effectively go out on their increasingly dim Champions League hopes as a shambolic lapse in defence and an agonising late miss by Richarlison helped Tottenham grab a draw at Goodison Park.

Both teams came into the fixture under pressure to atone for poor recent performances and it was the Toffees, who put in a display that was “night and day” in contrast to their lethargic showing at Brighton on Monday, who carried the greater threat overall and arguably deserved to win.

They were hugely unfortunate to fall behind to Spurs' only real chance of the first half, one gratefully snapped up by Harry Kane, but equalised from the penalty spot and then put themselves on course for victory with a brilliantly-fashioned goal in the second half.

However, they gifted a point to Jose Mourinho's men with a howler of a mix-up between Michael Keane and Mason Holgate which allowed Kane to profit once more with a clinical finish before Richarlison blazed the potential winning goal high over the bar late on.

Though Dominic Calvert-Lewin was ruled out again with an adductor problem and André Gomes wasn't risked, Carlo Ancelotti was finally able to include Allan in a starting line-up that saw Holgate drop into a central defensive three with Keane and Ben Godfrey.

Gylfi Sigurdsson kept his place in midfield with James Rodriguez and Tom Davies while Alex Iwobi came in for Seamus Coleman at right wing-back and Jordan Pickford returned in goal after recovering from an abdominal muscle complaint.

Tenacious in the press and exhibiting the running in midfield that had been lacking against the Seagulls, Everton started well and carved out the first genuine opportunity when James threaded Richarlison through the defence but his shot was pushed away by Hugo Lloris in the 22nd minute.

Just five minutes later, however, Tottenham went ahead very much against the run of play. A flighted cross from the left by Tanguy Ndombele was glanced on by Keane as Holgate appeared to lose his footing, which left Kane all the time he needed to chest the ball and volley past Pickford.

Everton were level within just four minutes, though, after Sigurdsson broke away down the left and cut it back to the top of the box for Rodriguez who went down under a clumsy challenge by Sergio Reguilon and referee Michael Oliver awarded a penalty.

Sigurdsson stepped up and sent the goalkeeper the wrong to confidently despatch the spot-kick into the other corner and level things up.

The Icelandic international smacked a direct free-kick into the defensive wall, James tested Lloris with a shot and Iwobi fired a goal-bound shot into Sigurdsson after a giveaway by a Tottenham defender before a nicely-worked move almost put Everton in front. Rodriguez and Sigurdsson played a neat one-two in the box and the Colombian got a shot off but the keeper was there again to make an excellent save.

Then, in first-half stoppage time, James whipped a free-kick behind the visiting defence which Godfrey met at the far post but he couldn't keep his header down and it flashed over.

The half-time interval appeared to disrupt Everton a little and it was Spurs who looked the more likely to score next as Son Hueng-Min turned Keane and tried to sneak a shot inside the near post but Pickford saved well.

Kane fed Ndombele a few minutes later and his drive deflected off Lucas Digne and dropped onto the top of Pickford's goal before Toby Alderweireld planted a near-post header off a corner onto the outside of the post.

However, a timely and prescient substitution from Ancelotti turned the match in Everton's favour. Coleman replaced the willing but largely ineffective Iwobi on the hour mark and within a minute, the Irishman had laid on the Toffees' second goal.

Coleman exchanged passes with Richarlison to take him around Eric Dier, he picked Sigurdsson out perfectly with his centre and the Icelander guided a beautiful first-time shot across Lloris and into the far side of the goal to make it 2-1.

Unfortunately, that lead didn't last very long either. Erik Lamela, recently on as a sub himself, clipped an innocuous ball in from the Spurs right, Keane stooped to nod it to Sigurdsson in the box but his header hit Holgate, fell to Kane and the England striker needed no further invitation to bury a first-time finish past Pickford.

Again Everton seemed to lose their way for a spell and Kane grazed the woodwork with a flicked header from a Lucas Moura cross while Lamela floated a shot over and Kane had a close-range shot charged down but the best chance to win it fell the home side's way with five minutes left.

The indefatigable Allan intercepted the ball in the centre-circle, Richarlison found Josh King, on for Davies as Ancelotti went for the win in the closing stages, and when his shot was beaten away by Lloris it fell to Richarlison but the Brazilian's composure deserted him and he lashed it well over the crossbar.

The result was a frustrating one for Everton who looked like a side capable of challenging for Europe perhaps for the first time at Goodison since the last time they played Spurs in that 5-4 cup tie in February.

It leaves them still in eighth place, six points off fourth place and three behind Liverpool in sixth with matches running out from which to catch the clubs above them.