As you can guess this isn’t about Everton’s football this season; instead it’s about a bit of history on the front of the current Everton home shirt. Hummel have impressed me with their shirt designs and, while I don’t like the current home shirt as much as last year’s it has a motif which links Everton and Goodison Park with the Mersey, WW1, the sporting rivalry between the US Army and Navy and the Wirral’s premier 80’s electropop duo. Even Humphrey Bogart features, just maybe. If the shirt designers realised even some of that I will be seriously impressed. 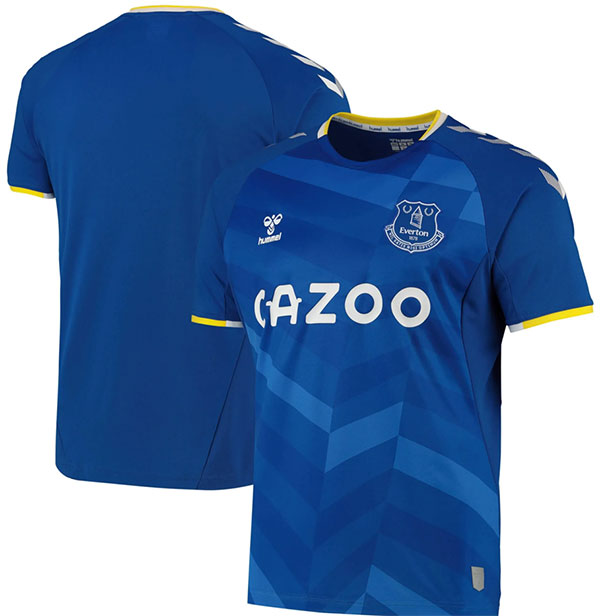 Look carefully at the front of the shirt and you see diagonal bands of three shades of blue which switch from lighter and darker to darker and lighter and change angle. This is inspired by dazzle camouflage which was developed in WW1 to make it more difficult for German U-boats to attack Allied shipping. Sometimes known by the American term razzle-dazzle this was camouflage in the sense of confusing the observer rather than concealing the target.

The idea was to make it as difficult as possible for an enemy submarine to work out the speed and direction of the camouflaged ship so it would be unable to get itself into a firing position. It was the brainchild of a British marine artist Norman Wilkinson who was also a reserve naval officer. A previous proposal for a scientific system based on animal camouflage was rejected by the Admiralty so the approach was purely artistic. Models of ships would be painted and viewed in a tank with a periscope before the design was scaled up and applied to the ship. 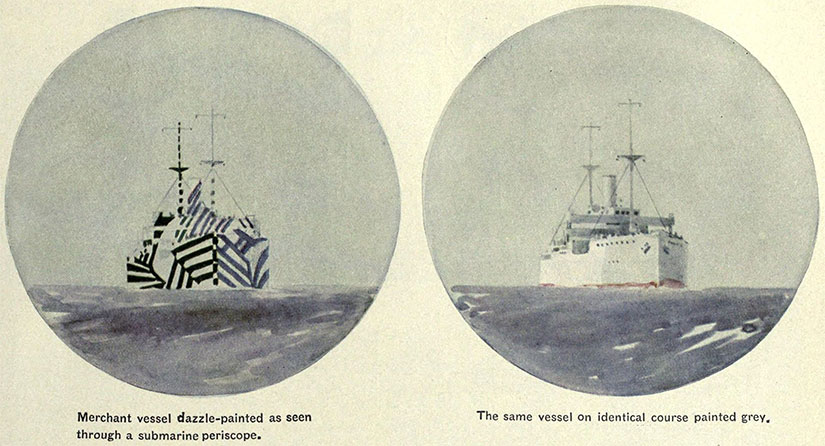 Liverpool became a hive of large scale artistic activity as depicted in a painting by the artist Edward Wadsworth. Wadsworth worked on dazzle schemes at the docks, but unlike Wilkinson, who was a conventional painter of ships he was part of the short lived avant garde Vorticist movement that emerged in 1914. The angular abstraction of their paintings lent themselves to dazzle schemes, and although both men had served in the Royal Navy supporting the Gallipoli operation in the Aegean there is nothing to suggest that they influenced each other. 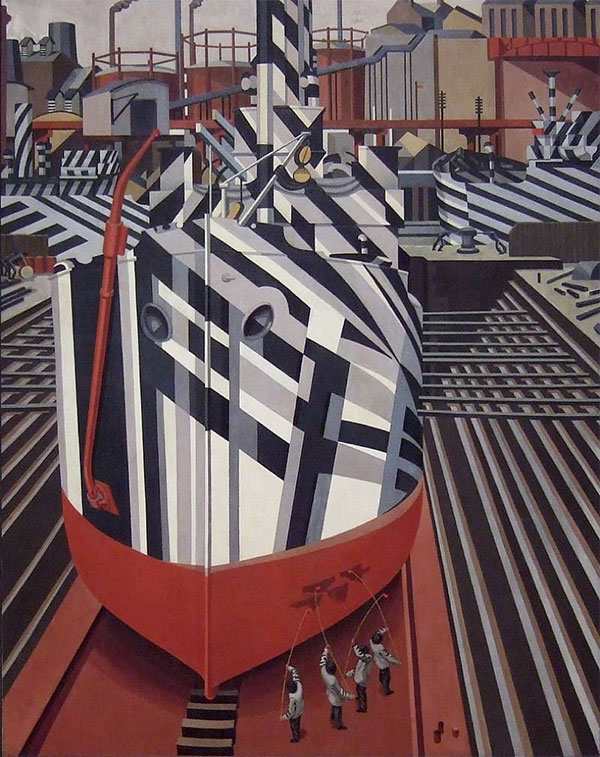 By far the largest ship to receive the dazzle treatment was the USS Leviathan, and she was painted in Liverpool. The Leviathan was originally a German ocean liner called the Vaterland, built in Hamburg for the transatlantic service and launched in 1913; she was the largest liner in the world when completed. When war broke out in August 1914 she was in New York and stayed there to avoid capture by the British until the US entered the war in April 1917. She was seized by the Americans to transport US troops to Europe.

It took until November 1917 to get the ship ready for sea after it’s lay up, including fitting guns to ward off U boats; she finally sailed for Europe on 17th December. On arrival in Liverpool she disembarked over 7,000 troops and went into the Gladstone dry dock. Due to her size she could only get in and out on the highest tides and consequently spent the best part of two months in Liverpool. During this time she was modified to take more troops and given a dazzle camouflage design. Eventually she was able to get out into the river and return to New York. 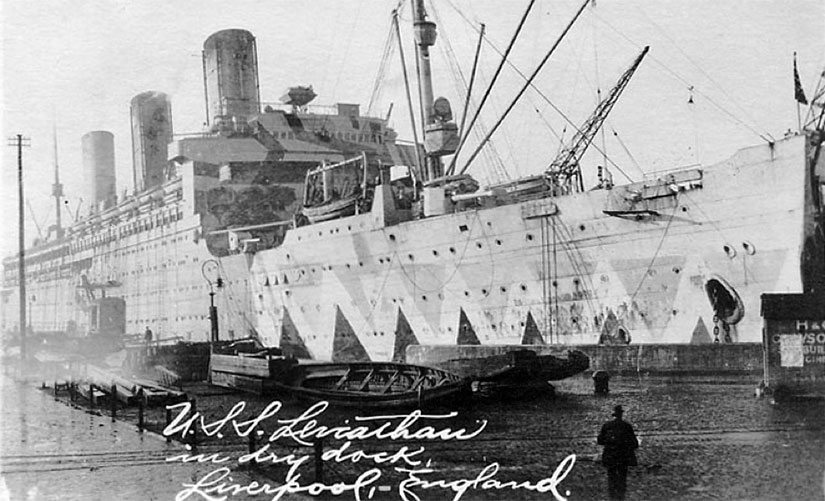 Ultimately the Leviathan would be able to carry over 14,000 troops and most of her subsequent trips were to Brest in western France. On one of these, in September 1918 she had an outbreak of serious sickness on the outward journey and this may have been the means of transmission for the deadly second wave of the 1918 Spanish flu epidemic to Europe. However many other troopships docked in Liverpool; it is estimated that of the 2 million American troops that served in Europe in WW1 over 800,000 came up the Mersey. The US Army built a large transit camp at Knotty Ash and the sight of fresh US troops marching through Liverpool became a regular sight. From Merseyside the troops went by train to the south coasts ports and then on to France.

Despite entering the war in early April 1917 it wasn’t until the autumn of 1918 that the American Expeditionary Force took the offensive as a unified army. They had done sterling work helping the British and French to blunt the German’s spring and early summer offensives but on 12th September they caught the Germans pulling out of the salient around the town of St Mihiel and drove them back over three days. They were then transferred north east and attacked either side of the Argonne forest west of Verdun on 26th September and continued to the end of the war on 11th November. The inexperienced US forces suffered heavy casualties for modest gains but their tenacity and British, French and Belgian successes elsewhere forced the Germans to ask for an armistice.

The process of transporting troops across the Atlantic now had to go into reverse. Five days after the armistice US president Woodrow Wilson proclaimed that 28th November would be Thanksgiving Day. To mark it the US Army engineers from the Knotty Ash camp played the Navy in a game of American football. The Navy team was selected from the crew of the USS Leviathan which was back in dock in Liverpool; the venue was Goodison Park.

The local papers reported the game as a novelty, one described it as “a demonstration of the nearest approach to actual warfare”. They clearly didn’t understand the rules and didn’t report the score (which was 0-0). The reports patronisingly compared it to ‘our’ football and contrasted what they called “the muddied oafs” with English football players. The main attribute required was strength not skill in one reporter’s sniffy opinion. Not content with looking down their noses at the teams they also passed comment on the largely American crowd, mentioning the “heartiness” of the spectators and saying that they had “shouted themselves hoarse”. The end of hostilities and the prospect of a return home may have had something to do with it.

On that same Thanksgiving Day a newly trained coxswain was assigned to the Leviathan; his name was Humphrey De Forest Bogart. When I originally found this out I speculated that the 18 year old future film star would have been in Liverpool and might even have gone to Goodison. However a more measured reading of his navy records suggests he was still in New York and was probably given shore leave until the Leviathan returned. Bogart suffered a deep cut to his lower lip during this period and years later a Hollywood studio publicity department would claim the scar was from a shell splinter as his ship fought off a U-Boat attack. Since Bogart didn’t go overseas until after the Armistice this was completely untrue. The more likely explanation is that he was escorting a prisoner to detention and was attacked by his charge who was attempting to escape.

With the end of the war the dazzle paint schemes disappeared although some more modest designs were used in WW2. Yet it wasn’t the end of the dazzling story on Merseyside. In March 1983 the Wirral’s Orchestral Manoeuvres in the Dark released their experimental fourth album which was inspired by the painting by Edward Wadsworth. It was called Dazzle Ships and despite being greeted negatively and a relative commercial failure over time it has become a cult classic cited by many subsequent musicians. Its cover was designed by Peter Saville whose work with Factory Records is the stuff of legend; it is an attractive nod towards Wadsworth, the Vorticists and the dazzle ships.

Yet even this was not the swansong of dazzle on the Mersey. To mark the centenary of the WW1 the artist Sir Peter Blake, best known for his cover for the Beatles’ Sgt. Pepper album was commissioned to produce a homage to the dazzle ships which saw the Mersey Ferry Snowdrop repainted to Sir Peter’s design. Entitled ‘Everybody Razzle Dazzle’ it became a familiar sight on the river. 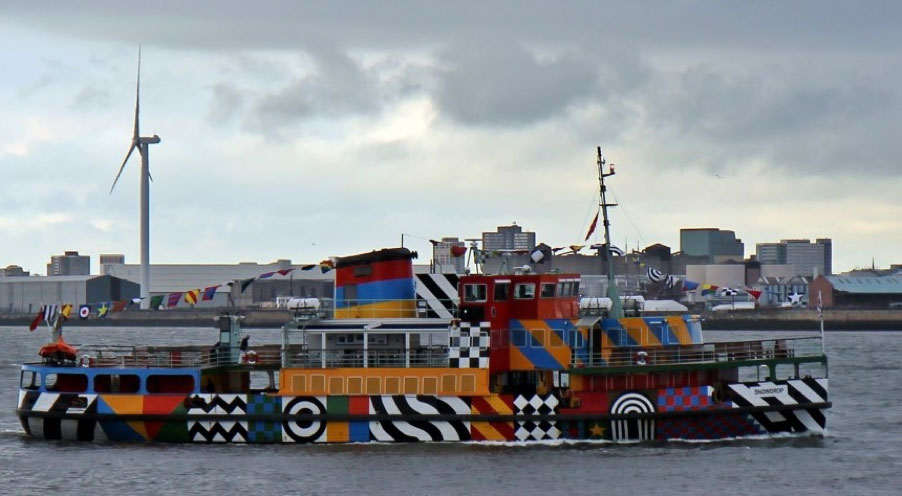 So Everton’s 2021-22 home kit with it’s subtle theme of dazzle camouflage is the latest in a long line of razzle dazzles down by the Mersey. It seems distressingly appropriate that something designed to confuse submariners into not knowing if their target is coming or going should appear on an Everton shirt. The club certainly feels both confused and not knowing if it is coming or going. We’ll just have to hope the shirt design dazzles some of our remaining opponents.

This is dedicated to my good friend, all round top man and frequent ToffeeWeb contributor Rob Sawyer.

Jason has it spot on.

Dale Self
5 Posted 18/05/2022 at 19:11:54
What a nice treatment of kit characteristics Peter. I am constantly amazed at the deeper connections of football organizations and their communities. Much deeper than what goes around here in the States. As for Everton's struggles I will now blame the Vorticists.
Kim Vivian
6 Posted 18/05/2022 at 19:34:52
That's a good article and it's warmed me even more to this kit.

I knew about the dazzle ships but never made the 'connect'. I think you're probably right that the designers didn't do that deliberately or it would have been part of the launch PR.

Good bit of background there and you learn something new every day. I wasn't aware that any ships were painted thus at Liverpool. Was Leviathan the only one, do you know?

My late Dad was in the Fleet Air Arm in WWII and a ship nut too. He told me about this, so I read of it many moons ago. Some interesting extra info here.

I remember an OMD album, “Dazzle Ships”, around 1981/2, with the same camouflage theme.

Fascinating, and very well pitched and also great humour regards the concept of the Everton players not seeing each other on the park.

But tomorrow night, it's Everton's match of the century to date.

Alan (#2), Borgnine made a more positive impact than Stallone then!

In particular Jason (3) - good call; it explains a lot.

Dale (5) I am sure when the recriminations really start the guilty will latch onto the Vorticists as the fall guys.

Kim (6) I'm sure multiple ships were painted in dazzle camouflage in Liverpool but I've not seen any statistics.

Barry Lightfoot
15 Posted 19/05/2022 at 18:12:58
Talking of blue this series was excellent A History of Art in Three Colours the episodes are blue, gold and white. Proper blue as well not Man City wishy washy blue. Sadly Everton weren't mentioned.

Here's a short documentary about the Dazzle ships. I know of at least one Evertonian that helped make it 👍