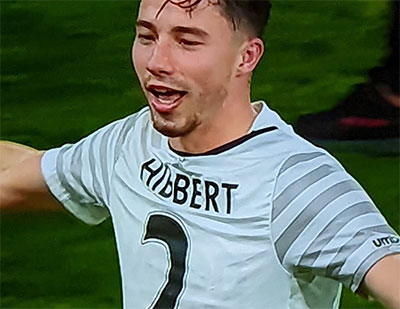 Everton will face Boreham Wood in the FA Cup Fifth Round following the non-league club's giant-killing act on Bournemouth and it's an especially plumb tie for one of their players.

Toffees fan Kane Smith earned what he described as "the tie of dreams" with the chance of playing for the Hertfordshire club at Goodison Park in 3 weeks after they were drawn against Everton earlier in the day and went on to beat the Cherries by a single goal at Vitality Stadium this evening.

Smith celebrated the win over the Championship side after the final whistle in the Tony Hibbert jersey he was wearing under his Boreham Wood shirt and his story will no doubt be a central theme of the tie on Merseyside which will be played on either 1st or 2nd March.

He will also ensure that the young Kane Smith enjoys his day on the hallowed turf of Goodison Park, whilst tempering his expectations of realistaitcally proceeding further in the competition, with a little "hwyl".

I hope he is welcomed with a terrific round of applause. And gets handshakes from Dunc and Bainesy on his way out at the end of the 5-0 defeat.

I remember when we played Lincoln, they got a great ovation at the end of the game. A game where they pushed Everton all the way.

Special day for me that one as I managed to get tickets for a mate from Lincoln I worked with and his mate. They brought their wives for a weekend in Liverpool and had a great time.

The mate my own mate brought was an ex personal protection officer for Princess Diana and a police weapons instructor so he was worn out by my incessant questioning and pleas to let me visit and help him out testing weapons.

The kind of magic the FA Cup produced. What a lovely experience for this young fellow. Delighted for him and his team. Non-league in the 5th round and haven't conceded a goal yet!

Hate for us to be the party poopers but I'm sure it'll be the highlight of their career just playing at Goodison. Them winning doesn't bear thinking about lol. That would be too much for us to endure.

Mark Taylor
7 Posted 07/02/2022 at 01:18:18
What a great story. Although they were hanging on at the end, they actually bossed the first half of the game against a second-string Bournemouth and could have been 2 or 3 up at half-time.

I've watched a fair bit of lower-league and non-league football and provided we take it seriously with team selection and show them some respect, this really should be a mismatch, there is a big gap in skill levels and fitness.

Mike Gaynes
8 Posted 07/02/2022 at 01:29:07
Brian, given how evil and subversive you appear, I'm sure the officer was more than worn out by your interrogation and weapons fascination. I've no doubt he was surreptitiously taking notes and there is now a file on you somewhere.

Seriously, that's a great story. I'll bet Smith brings his whole family to Goodison next month. Who knows, maybe the reclusive Hibbert pops in from France for the day and gives them all a thrill.

Sunday's game had to be the best birthday present of Smith's life, no contest. He turns 26 on Monday.

Now that would be ironic!

Good luck to Boreham Wood, but not “too” much luck.

We'll need to do more than just turn up. Another Brentford performance would do the trick.

Last time we got to a cup final, I seem to remember having to get past Liverpool, Aston Villa and Manchester United on the way. This draw would put Lampard very much on Napoleon's wanted list.

With 5 subs allowed, it's got to be a case of putting a strong side out, dominating the game, and then resting players when the job is done. Only by showing respect to the opposition, in that way, do you maximise the chance of avoiding a slip-up.

I never, ever saw anything about Everton... until August 2012, when Tony Hibbert scored in his testimonial and the promised 'riot' ensued.

It got wall-to-wall coverage here in Brazil. It popped up in sports programs and the day after appeared in all news bulletins throughout the day. Morning. Lunch time. Evening.

Kane Smith has got to be a truly mad blue to play in Boreham Wood's win yesterday with a Tony Hibbert shirt under his team kit. Good on him.

I hope he gets his day in the sun, but that we thump 'em!

John Raftery
16 Posted 07/02/2022 at 15:57:25
As I said on another thread, Kane Smith was man of the match when I attended Boreham Wood v Maidenhead in November 2016. It would be prudent not to underestimate the Wood. They have a winning mentality and a long term manager who has made them very hard to beat. The National League is much more professional than the old style non-league football of decades past.

The likes of Forest Green have made the step up very comfortably and barring an unlikely collapse will be promoted to League One in May. On the other hand we see the likes of Southend, fairly recently in League One, now loitering in the lower half of the National League.