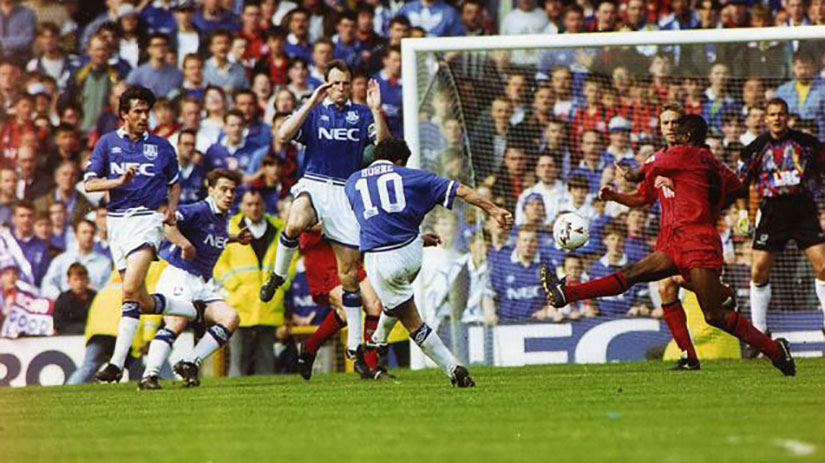 On Saturday May 7th 1994, Everton found themselves in the kind of position that could only have arisen in the worst nightmares of the team that won the League Championship in 1987. From that position, the club should have gone on to turn what was already the most prolific period in their history into a run that would finally place them as the top side in England and amongst the greats on the Continent. Instead, drawn to a new challenge by the knowledge that English clubs were not going to be allowed back into European competition for the foreseeable future given the galling blanket ban on English clubs following the Heysel tragedy, Howard Kendall followed Gary Lineker to Spain to become manager of Athletic Bilbao. The mixed reign of Colin Harvey followed with just the 1988 Charity Shield, an FA Cup defeat in 1989, and a couple of Wembley disappointments in the Simod/ Zenith Data Systems Cup to show for it.

The club was in decline at board level, the debts were beginning to accumulate and the side was no longer considered a force in English football when Kendall began his second spell at Goodison in 1991. By Christmas 1993 he had had enough of the tight purse strings and lack of progress and after a 1-0 win over Southampton, Kendall resigned. The search for a successor ended at the door of the then Norwich City manager, Mike Walker, who had led the East Anglian club to third in the Premiership and a subsequent UEFA Cup run that saw them defeat Bayern in Munich on the way. Walker was seen as the solution by the outgoing regime of Dr David Marsh whose last action it was to appoint him as the new Goodison boss. But, within the space of 11 months, Walker had led Everton to the foot of the table at which juncture he was sacked by new supremo Peter Johnson.

In between, Walker oversaw one of the most dramatic games in Everton's history. When he took over the management position in January '94, Everton were 13th in the table. By May, Walker had taken the Blues to 20th in the division, with one foot through the relegation trapdoor. They needed to win at home to Wimbledon (a draw would have been asking for a minor miracle in the games involving other relegation candidates) who were searching for their 10th match without defeat.- The club's owner, Sam Hamman, had promised them a trip to Las Vegas if they could achieve it. It was a desperate situation on which dangled 40 consecutive years of top-flight football at Goodison Park. Every Everton fan has their own version of the game. Here is my story of that most nerve-wracking of days.

I had been advised that morning not to travel to the game as it was sold out. When reports came through later that day of people hanging off the trees in Stanley Park trying to catch a glimpse of the proceedings in the ground, I realised the folly of my thinking - especially as only three sides of Goodison were open. So, I settled down nervously in the sparse kitchen of my university accommodation in Swansea awaiting kick off. As I recall I was a bundle of nerves all morning and afternoon until 3.00 rolled around and it was do or die for my beloved team. I had been as loyal an Evertonian as they come for nearly 10 years and I felt bad that I couldn't be at Goodison, but that was life.

Of course, the game was being broadcast live on Radio 5 - the media only taking notice of the club because of its dire predicament - but it was agonising not being able to actually see the action. My frustrations were increased by the fact that none of my flatmates were keen football supporters.Two of the six were casual supporters (one a Liverpool "follower") and the other four had no idea of the importance of the situation. "It's only a game, it's just football," they'd say. I felt like an island of tension in a sea of apathy.

After just seven minutes of the game, Everton were 1-0 down. Anders Limpar had inexplicably handled a wayward corner in the area and Dean Holdsworth had dispatched the resultant penalty past Neville Southall. It was the most unbelievable feeling. I will never forget the sick feeling in my knotted stomach. The feelings of desperation were tempered somewhat by the knowledge that there were still 83 minutes to go. In the 21st minute,though, genuine panic set in. Following a melee in the Everton area, Gary Ablett had somehow turned a shot bound for the advertising hoardings into his own goal. The element of farce would have been comical if the situaton hadn't been so depserate.

After half an hour, with my beloved Everton 2-0 down and staring Division One in the face, an air of resignation set in. We were going to get relegated today but there was no way I could turn off that radio until it was definite. In fact, as I recall, I could scarcely imagine life outside the Premiership. The events seemed so totally unreal and unthinkable, so much like a dream that I couldn't believe them. I had a flat full of people either sniggering or standing in utter incomprehension at my frustrated outbursts and expletives. I was holding a football which I was bouncing off the opposite wall incessantly throughout the game That and my ceaseless foot tapping and hand clasping was my only solace!

With 10 minutes left to go before half time, the match turned significantly in Everton's favour. Anders Limpar made a dart into the Wimbledon area whereupon an innocuous looking challenge by Peter Fear caused the enigmatic Swede to tumble to the turf in what can only be described as the most cunningly disguised dive I have ever seen. The referee swallowed it hook, line and sinker, signalled for a penalty and Graham Stuart side-footed the ball past Hans Segers to send a wave of relief across not only Goodison but the nation's Blues supporters as a whole.

Holdsworth had been guilty of a glaring miss by that stage, however, which, had he scored, would surely have put the game out of Everton's reach. As it was, the Toffees came out for the second half 2-1 down. I cannot think of anything that Mike Walker could have said during the interval that the players didn't already know but the purpose was there to be seen during the second period.

In these situations, a football fan will turn his thoughts to everything and anything to influence the result. For some reason, superstition played no part in that day for me but you had to believe that fate was involved somewhere. When Barry Horne struck a 35 yard piledriver just after the hour mark that flew in off the right hand upright, that belief was vindicated. What on earth possessed the Welsh captain to unleash such a speculative effort we will never know but Segers hardly had a chance to save it and the whole stadium erupted in disbelief and joy. I was ecstatic beyond my wildest dreams. And yet I wasn't surprised at the character my team was showing.

Not only were Everton in with a shout in the relegation stakes but there was now a genuine belief that we could go on to win the game. At the time of Horne's equaliser, a draw would not have been enough to displace Ipswich Town who were drawing 0-0 against second placed Blackburn at Ewood Park. However, Blues fans were praying for a goal by Alan Shearer to save the day. In the end, Shearer and Blackburn were not needed.

There were just nine minutes left to go at Goodison and the whole affair was getting very desperate for Everton. It was still 0-0 at Blackburn and to make things worse, Sheffield United had taken the lead at Chelsea throwing new doubt on the situation. In stepped the hand of fate again: Stuart received a pass from Tony Cottee but his wayward pass was miscontrolled by a Wimbledon defender. Stuart side-footing goalwards... The ball bobbled on the season-worn turf, over Hans Segers' lunge and into the net. The sight of the net bulging in front of the Glwadys Street end on the highlights that night is something I will never forget. Goodison Park became a mass of delirious bodies leaping up and down in sheer exhiliration.

For my part, some 250 miles south of Liverpool in the narrow confines of my kitchen, I was leaping around in an uncontrollable mixture of ecstasy and utter disbelief. I could not sit still as the final nerve jangling minutes ticked by agonisingly slowly. "Anywhere will do for Everton," the commentator was saying as the ball was belted into touch from all manner of positions. Finally, the final whistle blew and while the Goodison faithful invaded the pitch in celebration, I watched in jubilation and the first signs of tears in my eyes as Grandstand beamed live pictures from Goodison Park. There was the little boy and his gran waving scarves, the two young guys dancing in each others' arms in the centre-circle. And me? I was off to find anyone I knew to spread the news. Of course no one cared. The girls sitting outside in the sun didn't know the first thing about what I was on about but I was content in the knowledge that Premiership football would be played at Goodison Park the following season.

Blackburn never did get that crucial goal against Ipswich but Sheffield United were eventually overturned in cruel fashion by Chelsea and it was they, and not Everton, who joined Oldham and Swindon through the Division One trapdoor that fateful May Saturday. Everton were to be plunged back into the relegation dogfight almost immediately the following season but Joe Royle returned to the club he had served so brilliantly as a player that November and by May the following year, Everton were dancing around Wembley with the FA Cup in their hands. Such is the magic of football.

Press cuttings from that game.