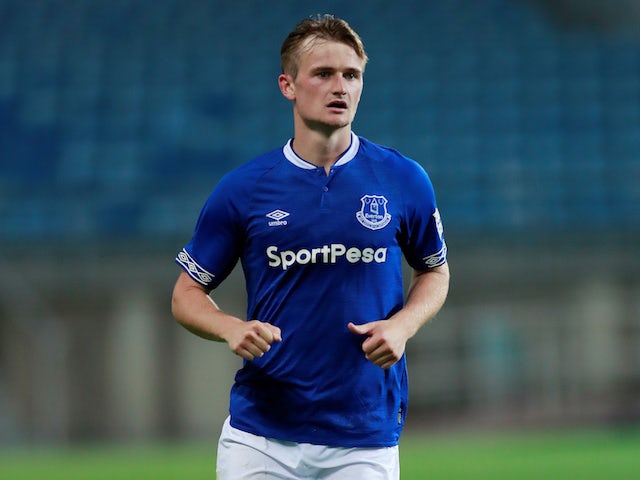 Connolly joined Everton's Finch Farm academy at the age of 9 and despite being eligible to play for Bulgaria, he chose to play for England and was capped at Under-17 and Under-18 levels. He signed his first professional contract with Everton in July 2015 and had his first loan spell in March 2016, a brief one-month stint at Barnsley.

Able to play in either full-back position or in midfield Connolly was first named on Everton's bench for the Premier League clash with Southampton at Goodison Park the following month and acquitted himself well as a second-half substitute for Seamus Coleman in Everton's injury-hit defence. There was great expectation that he would also play in the Merseyside derby the following Wednesday but manager Roberto Martinez went light on defenders as the Blues crashed to an ignominious 4-0 defeat. For the Wembley FA Cup Semi-Final showpiece against Man Utd, Connolly's his place on the bench was taken up by Matthew Pennington.

He would take his place on the bench as an unused sub in a couple more Premier League games before the season ended with the dismissal of Martinez prior to a new era being ushered in at Goodison Park under Ronald Koeman. However, Connolly's work under Koeman was delayed when he was called up to England's Under-19 squad for their European Championship campaign in Germany, only for him to return early with an injury after turning his ankle heavily against France. That didn't stop him accepting a new 3-year deal at Everton in July 2016.

He would not be involved in any more senior games. A solid first half of the season in the U23s saw him go out on loan at Wigan Athletic for the second half, before heading on to South Korea with four other young Evertonians who formed the core of the very impressive England side that would go all the way and win the U20 World Cup Final.

A breakthrough into the Everton first team would have to wait, however, as Koeman's three-year 'project' required the influx of proven players that would crowd out the midfield selection options. In September 2017, after starting with the Under-23s, Connolly was farmed out on loan to Ipswich Town for the season, surrendering his shirt number (33) to Joel Robles.

The young Evertonian loanee arrived at Portman Road at the end of the summer transfer window as a back-up right back who could also play in the middle of defence or in midfield, but he  become a regular fixture in the Ipswich Town engine room. Connolly's tenacity and all-action approach had him hoping he could  be viewed as a full-time central midfielder.

The youngster revealed a surprising lack of contact and support from Everton during the course of loan spell.

"'I've had contact with Everton, but not as much as I expected," Connolly told the Ipswich Star. "I think they've just let me get on with my football, there hasn't been as much support as I've wanted to be honest, but obviously it's a man's game and I'm learning the game on my own.

"When there are not that many people around you supporting you, it can be tough, but that's when you come into your own; I feel like I am growing up."

To round off the season, Connolly was selected as part of the Everton retinue who would help England's Under-21s win the Toulon Tournament for the third time in succession, a factor no doubt in the club agreeing a 3-year contract extension in August 2018. That put him in a good position to join the senior squad for their pre-season training camp in Austria.

The then 20-year-old had hoped to use the pre-season to convince new Everton boss Marco Silva that he was ready to push for a place in the first team, briefly reclaiming the No 33 shirt since Joel Robles had left the club. But the versatile defender wasn't quite able to do that; he joined Wigan Athletic on a season-long loan,  linking up with his Under-23s team-mate, Antonee Robinson.

That came two seasons after his first temporary spell there where he made 17 league appearances but this time he struggled to settle at the DW Stadium, making just nine starts in all competitions, and Everton recalled him on transfer deadline day in January 2019, before sending him out on loan to continue his progression with Bolton Wanderers, who were struggling near the bottom of the Championship.

Connolly was getting more games for England at Under-21 level and the summer of 2019 saw him farmed out on another loan assignment, this time to League One Lincoln City. He would make 11 starts for the Imps before being recalled by the Blues in January 2020 so that he could join Fleetwood Town, again on loan, were he played a good number of games and scored two goals before Covid-19 brought a premature end to the 2019-20 season.

23 by that stage and with only a year left on his Everton contract, with Carlo Ancelotti probably indicating that his chances of playing for the first team in the 2020-21 season were low, it was expected that Marcel Brands would help Connolly find another club in a permanent move. Nothing transpired however, and, in mid-October 2020, he returned to Fleetwood on loan for the rest of the season before his Everton terms expired and he was released in May 2021 after 8 years on the Academy's books. He later signed a 2-year deal with Blackpool.