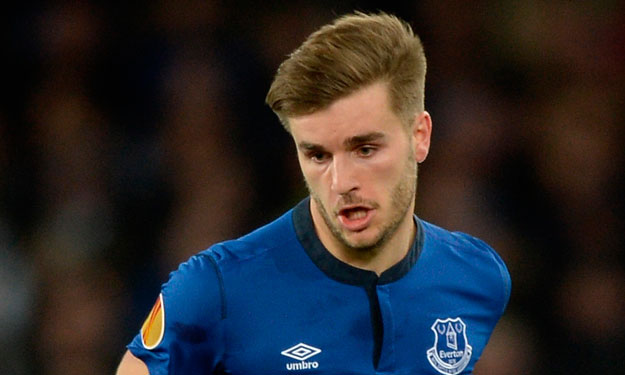 Luke Garbutt was signed as a 16-year-old in July 2009 having exercised an option to leave Leeds United, where he had been a part of the then League One side's academy.  The Harrogate-born left-back signed a two-year scholarship with the Everton Academy where he entered the Under-18 set-up.  He had England Under-17 honours as well as clocking up some reserve team experience for the Blues in his first season.

Everton's academy manager, Ray Hall, said of Garbutt at the time: “This is very much a transfer for the future for Everton. It's not an uncommon move to make – many Premier League clubs invest in young talent with a view to nurturing and developing them.”

Leeds were not particularly happy at losing such a good prospect and were due compensation following the transfer. The two clubs agreed that a figure would be set by tribunal which took place at the Premier League's offices in London in September and declared that Everton should pay an initial £600,000, with further payments based on domestic and international appearances. (£150,000 extra if the player made 5, 10, 20, 30 and then 40 appearances for the club, as well as a payment of £200,000 if he made a full international appearance — a potential fee schedule totalling £1.55M). The Yorkshire club also negotiated a 20% sell-on fee should Garbutt later be moved on.

Luke was part of the England team to win the Under-17 European Championships but the closest he came to a senior debut in his first season was being an unused sub in the Europa League game against BATE Borisov. As a signal that his apprenticeship was on the right course, Garbutt was rewarded with a 3-year professional contract in July 2010 and he would continue his development through the Blues' youth ranks. He featured in a second FA Youth Cup campaign but did not participate in any senior games during pre-season in 2011 so it was no great surprise when he went to Cheltenham for a loan spell that September which was eventually extended to the end of the season and the League Two play-off at Wembley, where Cheltenham lost to Crewe.

Garbutt played for England Under-19s alongside Ross Barkley and John Lundstram in the Junior European Championships and was named as a substitute by Everton for only the second time in August 2012 before he finally got on the field for the senior team when he played the second half of the League Cup clash against Leyton Orient at Goodison Park. He then spent the season playing for Everton Under-21s, picking up an injury in September 2012 that kept him out for a couple of months.

2013 saw Garbutt back out on loan again, this time to Colchester United where he would impress before being recalled in January 2014 after Bryan Oviedo suffered a double leg break in an FA Cup tie at Stevenage. He would spend the bulk of the rest of the campaign alternating between the U21s and the first-team bench until he finally saw some senior action late in the 2013-14 season under Roberto Martinez.

The Catalan expected the League Cup to be an opportunity for testing his up-and-coming youngsters the following campaign with Garbutt getting his first senior start in an ill-fated third round tie at Swansea City in August – but a much-changed Everton side was humbled 3-0.

Nevertheless, Garbutt got another chance to impress when both Leighton Baines and Seamus Coleman were injured for the Europa League trip to Wolfsburg in late November 2014. The young full-back hardly put a foot wrong in a very composed and confident display were he looked every inch a first-team player in a memorable 2-0 win.

Garbutt would make 10 appearances in all that season but as its end drew near, his unresolved contract situation became an increasingly worrying issue for Evertonians who felt they were witnessing the emergence of a natural long-term successor to Baines. Their fears of losing the Yorkshireman as a free agent for just an undetermined development fee in the summer were not eased when he informed the club that he wouldn't make a decision over his future until the end of the season.

Garbutt had let his previous deal run down before re-signing for Everton but with rumours floating around that rivals Liverpool or newly-promoted Bournemouth might lure him away with the promise of more immediate first-team football and Martinez having blooded 19-year-old Brendan Galloway at left-back for the final two matches of the 2015-16 season, few were confident he would re-sign.

Yet in June 2015, Garbutt eventually agreed an astounding 5-year deal with Everton that would run through 2020 — the basis for this remarkable decision By Roberto Martinez seemed spurious at best and the next stage of his development would be away from Goodison Park when Everton agreed at the end of July to a season-long loan for him at Championship side Fulham. That didn't start too auspiciously, as ankle ligament damage sustained in their last pre-season friendly meant he would be sidelined for the first two months of the new season but he recovered and got back into the team for the middle portion of the season.

However, the full-back struggled at times in London amid growing concern from both Cottagers fans and Evertonians. Garbutt's spell in West London was not without its troubles, and he only started 19 games in the Championship over the full season as Fulham struggled at the wrong end of the Championship and just avoided relegation at the end of the season. Garbutt was shaky in defence and offered little in attack, prompting the Whites to end their interest in the defender after his loan deal.

Garbutt's hopes of being rehablitated back into the first-team setup at Goodison under Ronald Koeman didn't look strong when he was overlooked for the first training camp under the new boss in Austria, and his probable departure was presaged by a failure to make the published list of squad numbers for the 2016-17 season despite playing his part in the Under-23s successful preseason, where they won the Lancashire Senior Cup.

He was handed another loan assignment instead, this time 4½ months with Championship side Wigan Athletic, until the end of the 2016. However, it became another disappointing loan spell that saw him make just 8 appearances before returning to Finch Farm in January. He played no further games, being hampered by a back injury.

Garbutt failed to win Koeman over during the disrupted 2017 pre-season schedule training which gave rise to speculation that he could be allowed to leave Goodison permanently if he could find a suitable club, this despite the fact that Everton would start that season with just one recognised left-back in the squad.

Despite not going out on loan, Luke wasn't registered in either the Premier League or Europa League squads for 2017-18, an oversight that seemed like it could prove costly when Baines was injured in November and right-back Cuco Martina was asked to deputise in an unfamiliar position for a number of matches that stretched into the New Year.

With another opportunity to officially include him in Everton's Premier League squad, interimm managerial hire Sam Allardyce ran the rule over Garbutt in training and in Under-23s action during January 2018, at which point he was assigned a shirt number, 36, in anticipation of him being called back up to the first team as cover for Baines.

However, while he made the bench for a Premier League trip to Watford in early 2018, Garbutt would not find a route back into the senior fold and it was no surprise when he was the first loanee announced that July, securing a season-long deal with Oxford United in League One. Things didn't initally go much better for the now 25-year-old with the Us but he eventually made 25 league appearances, scoring four times.

For the final year of his Everton contract, yet another loan deal was arranged, this time with Ipswich Town, who had suffered relegation from the Championship to League One. Garbutt impressed at Portman Road, scoring or creating 9 goals in 28 appearances from left-back, a record he hoped would be enough to earn him a permanent move to East Anglia when his contract at Goodison finally ran down in June 2020.

* Full seasons on loan at Fulham, then Wigan Athletic, then Oxford United, then Ipswich Town