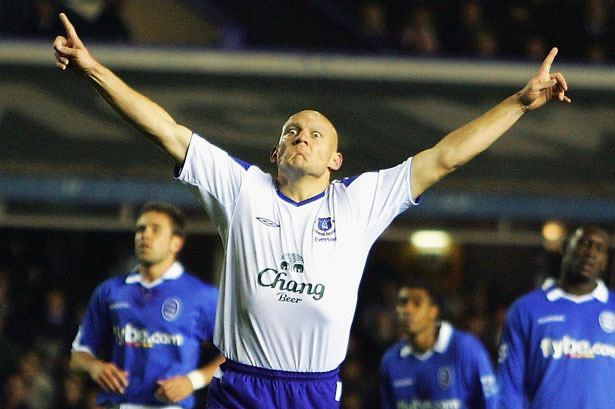 Danish international midfielder Thomas Gravesen joined Everton from Hamburg SV in the Bundesliga for £2.5m following typically protracted transfer negotiations in the summer of 2000. He arrived at Goodison Park with a reputation as a 'mad dog' whose bark is as fierce as his bite in the tackle and he came to epitomise that nickname during his time in England.

Gravesen had rejected the chance to play European League and Cup football with Hamburg and turned down a move to Bayern Munich to come to the Premiership. At the time he said: "I've always wanted to play in the English Premiership and I couldn't let such a good opportunity slip away."

Walter Smith first spotted Gravesen when he was playing sweeper for Danish club Vejle and considered signing him during his time as manager at Rangers. "Thomas is a player I've known about for a while and comes out of contract in a year, which alerted us to his availability," the then Everton boss said.

Joining Hamburg in 1997, Gravesen was named as one of the best foreigners in the Bundesliga by the German football magazine 'Kicker', one of the key performers in his club's impressive domestic campaign.

He made a fairly impressive start to his Everton career as well, showing a willingness to get forward, fearless tackling and good midfield distribution.  His first goal (in the 3-1 home defeat by Manchester United in the autumn of 2000-01) demonstrated how effectively he could burst from midfield into the final third, but he was unable to maintain that form and over time he became more erratic and unreliable.

Much the same trend occurred the following season and as Everton's season took a familiar turn for the worse in December 2001, Gravesen started making noises in the German and Danish press about lack of ambition at Goodison and how lonely his existence on Merseyside was.

Officially struck down with injury that month, there were growing suspicions that he had alienated himself from his manager and his teammates and that he was being frozen out of the first team set up.  The arrival of Tobias Linderoth, billed as a central defensive midfielder in the Gravesen mould but later proved anything but, further suggested that his time with Everton was coming to an end.  Strangely, however, Smith started to involve him in games, albeit as a typically late substitute.

After Smith's departure, Gravesen was selected by Andy Holden for David Moyes's first game in charge, at home to Fulham... and he got himself sent off in the first half, undermining what had been an excellent start by the team to a very important match in terms of the club's ability to avoid the drop that season.

The conclusion was that he had no tactical discipline and simply chased the ball like a schoolboy rather than holding his position in a team shape. Sometimes it looked as if he was running around the pitch with a hand-grenade wondering whether to take the pin out.  And he stayed pretty much the same throughout Moyes's first season, punctuated by consistently good performances at international level for Denmark.

He was much the same during the 2003-04 season, when Everton increasingly struggled to come to terms with the presence of Wayne Rooney, and the high-handed discipline of Moyes temporarily broke team spirit.  Gravesen made it clear through his agent, John Siveback that he would not stay around unless significant changes were made and Everton started to show some European ambitions.

Fast-forward to the first half of the 2004-05 season and everything changed.  Gravesen finally looked the international class player he always looked playing for Denmark and at the turn of the year, the British press were lauding him as one of the best midfielders in the country.  Indeed, one national paper singled him out as the most important player in his position for 2004.

There were, however a few clouds hanging over his vastly improved performances: the fact that his contract expired at the end of 2004-05, his failure to make any sort of commitment to the club, and his agent consistently talking up interest from the top clubs in Europe.

As the January 2005 transfer window opened, Real Madrid and Manchester United had emerged as the front-runners for "Mad Dog's" signature, and it was the call of Los Galacticos that proved irresistible for Tommy and for Everton.  The club were able to conclude a reasonable deal with sell-on and buy-back clauses for the 28-year-old midfield magician who had underpinned the team's remarkable half-season, playing by far his best football in a 4-5-1 formation.

Given that Real effectively signed the Dane as a defensive midfielder, the joke at the time was that the Spanish giants had got their bald Everton midfielders mixed up and signed the wrong one, leaving Lee Carsley at Goodison. He did briefly find a role at the Bernabeu as a holding midfielder but his time there was short and he moved on to Celtic in 2006 having played 34 League games in La Liga.

Gravesen would find himself back at Everton in August 2007 when Moyes re-signed him on loan for the season from Scotland. He was unable to have the same impact as in his first spell with the Toffees, though, and would make just 13 appearances in all competitions. A highlight was his successful spot-kick in the penalty shootout against Fiorentina in the Uefa Cup but Moyes elected not to extend "Tommy's" contract and he wasn't to be retained by Celtic either.

After failing to find new employers, Gravesen retired from football in January 2009 and he eventually settled in Las Vegas in the United States.