With Leighton Baines and Alan Stubbs ruled out through injury, David Moyes deployed Phil Neville and Joleon Lescott at full-back and partnered Joseph Yobo with Phil Jagielka in the centre of defence.

The rest of the side was unchanged from the weekend win over Fulham, Yakubu getting the chance to add to his nine goals so far this season by leading the line once more.

6' — Back-to-back corners for Everton. Eventually a header by Yakubu wide from Arteta's cross while Pienaar might have shot himself in the build-up.

13' — Goal. Carlton Cole, possibly offside, wins the chase for a long ball and beats Tim Howard to make it 1-0.

18' — Tim Cahill's shot from the edge of the area is easily gathered by Green.

34' — Cahill's header is cleared but he goes down in a heap in the area and the physio is called on immediately amid fears of a head injury, but the Australian gets up and seems OK.

37' — Pienaar's low cross is spilled by Green but, agonisingly, Cahill is on the wrong side of him to capitalise.

40' — GOAL! Terrific side-foot shot by Leon Osman, from Pienaar's touch on after Lee Carsley had looked odds-on to shoot, to level the scores. 1-1

42' — Cahill meets Areta's corner but he heads wide. In any case, Referee Halsey had whistled for a free kick.

Having conceded the early goal and much of the initiative to West Ham for the first half an hour, Everton seemed to get their act together in final quarter of an hour and finished the half the stronger. They were rewarded with a well-struck equaliser that set things up nicely for an improved second period from the Blues' perspective.

47' — Strong claims for a penalty are waved away by the referee.

51' — Great defensive tackle by Lescott to deny Hayden Mullins as he was about to pull the trigger.

57' — No free kick given for a foul on Pienaar on the Everton left but Jagielka mops up nicely with a well-executed sliding tackle.

58' — Now it's the Hammers' turn to defend well, Cahll denied by a good challenge from Upson inside the area.

60' — Another promising build-up dies when Neville again fails to beat the first man with a cross from plenty of spacde on the Blues' right.

62' — Yobo's smart intervention at the near post denies Ljunberg following a trademark run by the Swede, turning the ball behind for a corner which, thankfully, comes to nothing.

64' — Free kick in a good position on the right for Arteta but it comes to nothing when Yobo is adjudged to have fouled Neill.

74' — McCartney's challenge takes it off Arteta's toe around the penalty spot and puts it behind for a corner which, again, comes to nothing.

75' — Yakubu is almost in on Cahill's pass but the ball just runs ahead of him and a real chance is snuffed out as it's put behind for a corner. Arteta's kick is put behind again for a second-successive corner but that too is met by a West Ham head and is cleared.

76' — West Ham on the counter-attack are denied by Lescott as Everton get numbers back in time.

76' — Carlton Cole, increasingly nullified by Yobo and Jagielka, is taken off, John Pantsil replacing him.

83' — Corner for West Ham after Reid is denied by Osman's sliding tackle. Ljungberg's near-post kick is cleared by Carsley. Ashton tries his luck from distance but blazes into the Bobby Moore stand.

86' — Hoping for another late show, Cahill gets behind the back of the defence and his cut-back is cleared for a counter-attack opportunity for West Ham which yields a corner off Jagielka.

87' — Ljungberg's kick is headed away by Carsley again and Reid's shot is deflected behind for a goal kick, the last touch aparently coming off a claret body

88' — GOAL!!! All of a sudden, with extra time looming, Yakubu is round the back with Green stranded following a mix-up with Danny Gabbidon and scores! Has that won it at the death for Everton? Yakubu is booked for taking off his shirt but I doubt he'll be all that bothered. 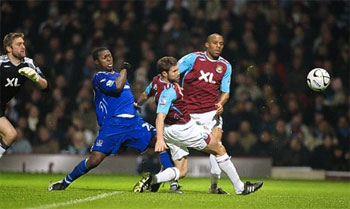 Yakubu stabs home the winner at the death

90' — The fourth official indicates a minimum of three minutes of stoppage time will be played but it's immaterial because the Super Blues run the clock down with professional ease.

Everton embark on part one of a Cup and League double-header at Upton Park this Wednesday as they battle West Ham United for a place in the Carling Cup Quarter Finals. The two teams meet again in the Premier League at the same venue on Saturday.

This will be the Blues' first quarter-final tie in any competition in over five and a half years, their last was, somewhat ironically, the 3-0 drubbing at the hands of Middlesbrough in March 2002 which was for Chairman Bill Kenwright the straw that broke the camel's back where Walter Smith was concerned.

With the team now flying on a run of 10 games without defeat in all competitions under David Moyes, confidence is high that this could be the year that Smith's successor guides Everton to their first Final since 1995 and, possibly, break their League Cup hoodoo. This competition is the one major domestic honour to have eluded the Blues since its inception in 1960.

Fighting battles on three "fronts" means that the games are coming thick and fast for Moyes's boys... and with them come the inevitable fitness concerns. Already without Alan Stubbs until the New Year after the veteran defender injured a calf in training a fortnight ago, Everton lost Leighton Baines for an estimated six weeks after he tore a hamstring in the first half of last weekend's 3-0 win over Fulham.

That news was tempered somewhat by the fact that both Tony Hibbert and Nuno Valente will travel to the Capital with the squad after recovering from back and hamstring strains respectively. That gives the manager options, with Valente, Joleon Lescott and Phil Neville able to play left back.

Moyes's usual wealth of choices up front — perm one from Yakubu, Andy Johnson, Victor Anichebe, James McFadden and James Vaughan — offers opportunities to rotate personnel in that position too. Yakubu's weekend hat-trick may persuade the manager to retain him as the starter in front of a five-man midfield while he is on a hot streak or he could be held over for the weekend where more precious League points are up grabs. 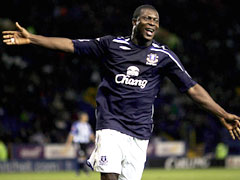 Yakubu: will Saturday's hat-trick hero be tasked with firing the Blues into the semi-finals or rested for Part II against West Ham this weekend?

After spending heavily in the summer, West Ham have been something of a mixed bag so far this season. Like Everton they have progressed in the Carling Cup at the expense of lower league opposition but were also involved in the 2nd Round so have played a game more in this competition.

In the League they've had some notable away victories — 1-0 at Blackburn last Sunday and 5-0 at Derby before that — but have not been as impressive at home as their squad and expenditure in the transfer market would suggest.

On-form Dean Ashton is clearly a man to look out for, while the likes of Freddie Ljungberg, Scott Parker and Luis Boa Morte can all cause problems on their day, particularly if the Hammers operate as a cohesive unit. Nolberto Solano and Henri Camara are cup-tied and Matthew Etherington, another player in good form, is a doubt with a groin injury.

In the likes of Lescott, Joseph Yobo, Lee Carsley and Tim Howard, though, Everton have more than enough strength at the back to provide the kind of foundation on which the more attacking players can get it done at the other end... as they have been doing regularly over the past 10 games.

Play the way they have been recently and the Blues must be fancied to nick this one and qualify for the semi-finals of the League Cup for the first time in 20 years.