Everton won for the first time in eight matches but it took a headed goal by Marouane Fellaini, his second this week, in the last minute to create some late drama in a cold, wet and error-strewn encounter that was petering out to a goalless conclusion before the Belgian intervened.

While a more pulse-racing advert for the excitement of the Premier League was playing out a couple of hundred miles south at The Emirates, where Arsenal and Tottenham shared eight goals in the North London derby, this match at the Reebok illustrated just how poor a game between two teams struggling at the wrong end of the table can be despite a relatively positive opening by both sides.

Bolton were desperate to make amends for a 2-0 defeat at Tottenham on Sunday where their manager, Gary Megson, suffered a torrent of abuse from the traveling fans, while Everton were looking to build on their second-half revival against Manchester United and record a first victory since mid-September.

Mikel Arteta and Yakubu in particular looked up for it and the way David Moyes's side started with some energetic running and probing of their hosts' defence suggested that it might be a profitable evening for the Blues. The Spaniard and the Nigerian almost linked up for an early goal, too when Arteta twisted and turned his way to the byline before eventually getting his cross in but Jussi Jaaskeleinen was able to gather the Yak's header down by his left-hand post.

Louis Saha, starting up front for the second consecutive game, actually had the ball in the net after 11 minutes when he drove home Yakubu's clever backheel but referee Phil Dowd had already blown for handball. And after Yakubu had snatched at a loose ball following Arteta's free kick and sent a tame effort into the 'keeper's grateful arms, Saha had two efforts on goal blocked by defenders in close attention as Everton looked the more likely to break the deadlock in the first quarter of the game.

The best chance of the half thus far fell to the Frenchman when Yakubu's powerful run took him to the edge of the Bolton area and he squared it to Saha in plenty of space but Jaaskeleinen drived onto his low drive following a slight deflection that might have aided the Finn more than distracted him.

Bolton for their part were moving the ball quickly enough through midfield but were restricted to long-range efforts. None of Riga, Elmander, Muamba or Nolan caused Tim Howard many problems with shots from outside the box, though Joleon Lescott was booked for a wild sliding tackle on Gretar Steinsson that didn't appear to make contact with the Wanderers right back but the referee took expection to it nonetheless.

That promising start, however, lapsed into a contest littered with mistakes played out an oil-slick surface that had everyone from Arteta to the referee doing their best Bambi-on-ice impression. While in truth, Megson's side never looked like scoring in the first period, they might have profited greatly when Howard slipped in his goalmouth as Matt Taylor rose to head Kevin Davies' flick-on goalwards but the prone American was grateful to see the ball fly a yard wide of the upright.

On the whole, though, the fayre was poor and getting worse. Bolton in particular were making a catalogue of comical defensive errors and gifting the Blues far too much space but as was the case on Saturday, time and time again good positions were wasted with the failure to produce a telling final ball.

Moyes had named an unchanged line-up from the weekend draw with United, leaving the returning Tim Cahill on the bench and the casual observer might have opined that he'd be ruing that decision by half time. While Arteta and Steven Pienaar were positive and involved, the game was largely passing Leon Osman and Fellaini by in the middle of the park, both of them anonymous and unproductive.

The Belgian international did, however, have perhaps the best chance of the first half just before the half-hour mark when he did brilliantly to get in front of his marker at the back post but could only bullet Phil Neville's deep cross narrowly over the bar.

Half time presented Moyes with the chance to ring a couple of changes but it was as-you-were when the two teams kicked off the second half, one that Bolton started much the brighter and in which Everton's ability to find another Blue shirt appeared to practically evaporate. A Muamba shot from 18 yards that Howard easily gathered after 47 minutes was the only incident of note until Davies almost got on the end of a dangerous Riga free kick just past the hour mark but it was knocked behind for a corner that came to nothing.

Osman and Fellaini remained almost completely ineffectual and as the match wore on the Blues's performance just seemed utterly devoid of conviction. Their inability to keep the ball against desperately poor opposition was hair-pullingly frustrating but when the change came from the manager, it was arguably the wrong one. Instead of removing some of the dead weight in midfield, Moyes removed Yakubu, introduced Cahill and switched to a 4-5-1 formation.

Somewhat predictably, it had almost no impact on proceedings. Neither the Australian nor Saha were seeing enough of the ball to pose any kind of threat and the latter was eventually himself withdrawn with eight minutes left in favour of Victor Anichebe.

In between, Bolton had been trying to find some way past the Everton back line, one which was marshalled impressively by the virtually faultless Phil Jagielka who kept things on an even keel throughout, not least when Joseph Yobo lost the plot for a few minutes midway through the first half. Taylor stabbed Steinsson's low cross wide, Elmander saw a shot loop up off a defender and drop behind Howard's goal, Davies headed behind from the angle from another Riga free kick, and, after gifting him far too much space, Yobo recovered to deny the same player a glorious chance by racing back to charge down his shot.

The game was crying out for a winner as it entered the closing stages and there was a very real sense that Everton only needed to get their act together once to score and win it. Their hosts were doing their best to make it happen, illustrated in the 82nd minute when a comical series of clearances kept coming back to Arteta on the right side of the box but when he finally got the ball to the back post, Lescott allowed it to bobble behind for a goal kick.

Then, almost out of nowehere as the regulation 90 minutes expired, Everton's increasing pressure told. Pienaar just about avoided the offside trap to collect Arteta's neat pass down the right and from the byline the South African crossed to the six yard box where Fellaini, with the freedom of the Reebok just had to pick his spot with a header to win the points. The big-barneted Belgian steered his effort wide of Jaaskeleinen and onto the inside of the post and for a horrible moment it looked like the ball would bounce back out before it bounced across the line and inside the woodwork on the other side to send the traveling Blues into ecstacy.

Of course, being a magnet for yellow cards Fellaini was booked for his celebration and faces a one-match ban but that will only slightly mar his game winning goal that rescued three points from a mostly awful team performance.

It might have been a highly flattering 2-0 a couple of minutes later when Anichebe's marker slipped trying to deal with a ball forward allowing the young striker to advance on goal where Jaaskeleinen also lost his footing but recovered quickly to close him down and block his attempt to put what would arguably have been an unfair gloss on Everton's display on the night.

Having gone so long without winning, three points from a potentially tricky trip to the Reebok on a wet and frigid evening will be warmly welcomed but they should not be allowed to mask what was another poor display by Moyes's men. Neither should Fellaini's all-important strike at the death detract from the fact that he looked off the pace and, like Osman, was a passenger for long periods.

Questions will inevitably be asked of the front two but apart from a couple of half-chances for Yakubu, they had almost zero service. Saha in particular can't have had a simple goal-scoring chance created for him in the entire time he's been with the club so far, such is the inability of the midfield to engineer enough scoring opportunities.

So plenty for Moyes to ponder as he plots his team's way through a favourable section of the fixture list. This victory lifts them into 12th and within striking distance of 7th place but they still look a disjointed shadow of the team that finished "best of the rest" last time out.

The assessment of just how much Phil Neville's crunching tackle on Cristiano Ronaldo at the weekend and the resurgence against Manchester United that followed has Everton's transformed morale — and possibly their season begins at Bolton's Reebok Stadium on Wednesday evening.

The rhetoric from David Moyes's side since they turned in arguably their most determined second half performance since the victory at Stoke City two months ago has been all about a new frame of mind and a desire to push on into the right half of the table. Whether that mindset translates to points against Gary Megson's struggling Trotters remains to be seen.

Apart from long-term absentee Lars Jacobsen, Moyes more minor injury concerns about Tony Hibbert, Yakubu and Nuno Valente and while he expects all three to be fit, only the Nigerian is likely to affect the first-team line-up — the manager is expected to field an unchanged 4-4-2 formation and the Yak, who scored in this fixture last season, would be the first choice to partner Louis Saha. 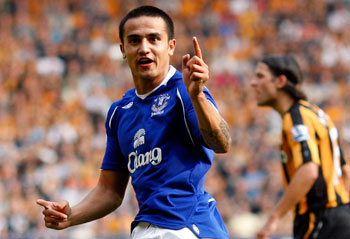 Tim Cahill: back from suspension but not guaranteed a start

Tim Cahill is available again after serving a three-match ban for the red card he was shown in the Merseyside derby and if Yakubu isn't passed fit, Moyes may be tempted to go 4-5-1 with Cahill playing off Saha. If not, with Mikel Arteta, Steven Pienaar and the improving Marouane Fellaini — whose height will be needed against Wanderers — Leon Osman would seem to be the obvious candidate to make way for the Australian if the manager decides he wants to change things in the middle.

Bolton's key absentee will be former Evertonian, Gavin McCann who starts a three-match suspension of his own.