Everton face Sunderland at Goodison Park  hoping to erase the bad memory of Saturday's disappointment in the FA Cup by taking another leg up in the ascent towards the upper reaches of the Premier League.

David Moyes has rung one expected change with Leon Osman replacing Diniyar Bilyaletdinov while Mikel Arteta and new loan signing Philippe Senderos start on the bench as both are lacking match fitness. Victor Anichebe makes his return to the bench after his long fight to recover from a horrific tackle by Kevin Nolan.  For Sunderland, Killgallon, oft rumouured target for David Moyes, debutants.

A bitty start but after just 6˝ mins, Cahill flicked the ball into the net off his head to the far post, from a nice ball clipped in by Fellaini.

19 mins gone and a looping cross deep from the left by Baines is noded down by Pienaar.  Donovan still had plenty to do, chesting down the bouncing ball, carrying it wider and then slotting it past Gordon (with the help of a small deflection), a very nicely taken goal.

Richardson came off for Kenwynne Jones, and Osman tried a pop on 25 mins from a cleared ball but did not connect well and screwed it wide. Another good move later on and it was Osman who decided to take a poke, but the ball flew into Gordon's arms.

Just before the break, Baines drove in a good shot from a free-kick but it was too close to Gordon. At the other end, Jones came very close as Distin hesitated.

A second sub from Steve Bruce at the break, bringing on Reid for Cattermole.

A great move should have seen Donovan get his second after some excellent movement got him around the keeper but his shot was blocked on the line by McCartney. Saha then ran into the area onto a beautiful ball and was tackled well for a corner that Baines put across but Cahill could not reach. The final substitution for Sunderland was Nosworthy off for Da Silva.

Everton could not really impose themselves and Arteta eventually came on for Donovan, who was warmly applauded for his efforts.  Vaughan then came on for Louis Saha.

It was pedestrian stuff from Everton in the second half, resting on their laurels, allowing Sunderland to surge near the end, getting some good chances and forcing a couple of good saves off Tim Howard.  Victor Anichebe came on for the last few minutes in place of  Pienaar as Sunderland continued to press through the three minutes of stoppage time and three more vital points acquired.

Everton got back to winning ways after Saturday's FA Cup disappointment with a comfortable if ultimately uninspiring win over Sunderland at Goodison Park, a result that extends the Blues' unbeaten run in the Premier League to eight games. 2-0 up after 18 minutes thanks to Tim Cahill's early header and Landon Donovan's first goal in a Royal Blue jersey, David Moyes' charges could well have gone on to destroy the Black Cats in a manner similar to the 7-1 hiding they meted out to the same opposition a few seasons ago, but they took their foot off the pedal and forced the home faithful to endure an increasingly untidy second half that yielded no further goals.

Sunderland, coming off a 7-2 drubbing in their last away match at Chelsea, looked there for the taking in the early going and Cahill looked to have set up another miserable night for Steve Bruce when he was picked out by Marouane Fellaini's deft chip into the box in the sixth minute and the Australian glanced the ball on and into the far corner.

It was the home side's first meaningful attack and 13 minutes later, Cahill was involved again when he headed a long ball from the back into the path of Donovan who controlled it with his chest, took another couple of touches past his marker before firing a crisp shot past Craig Gordon from just inside the area. A special moment for him and a relieve to history aficianados who feared he might become the first Everton no. 9 not to score in a season.

The Blues eased up visibly after that and though Leon Osman, back in the starting line-up in place of Diniyar Bilyaletdinov, exhibited some nice footwork just past the half hour to dance inside and engineer space for a shot, his effort was fairly tame and too close to the 'keeper and it was saved.

Indeed, with Sunderland offering next to nothing up front, proceedings fell a bit flat as half-time approached, livening up briefly just before the break when Louis Saha had a shot deflected wide and Leighton Baines tested Gordon with a low free kick from 30 yards out that the 'keeper saved low by his left-hand post.

At the other end, the Wearsiders briefly threatened when Bodo Zenden flashed a cross right across Howard's six-yard box and Kenwyn Jones, on as a first-half sub for the injured Keiran Richardson, somehow guided the ball over the bar instead of making a decisive touch.

The home crowd wa clearly in the mood for more goals and some entertainment beyond Fellaini's occasional flourishes and elegant footwork and some early attacks at the beginning of the second half promised more goalmouth action. In the final reckoning, however, the second period ended up being a big let-down.

Donovan, who had a more enterprising game than was the case in his last two outings, almost doubled his tally in the 57th minute when he was released by Cahill and though the American raced into the box and took the ball wide of Gordon, his goalbound shot from the angle was hacked off the line by McCarthy.

Three minutes later, Steven Pienaar released Saha into the clear but he lacked the pace to stay ahead of John Mensah and the defender got back to exectute a perfectly-timed sliding tackle just as the Frenchman was about to shoot.

Donovan was eventually replaced by Mikel Arteta and then Saha by Vaughan but the final quarter of an hour was all about Sunderland's vain attempts to claw their way back into the match. That Everton gave them ample opportunity by continually trying to walk the ball out of defence was a damning indictment of Sunderland's attacking failings but it gave Howard the chance to shine with two fantastic saves in the closing stages.

First, he pulled off a terrific one-handed save from Zenden's shot from 12 yards out, then he pawed Jones's header over the bar after the striker had been allowed to rise unchallenged to meet a corner in injury time.

In many respects, this home game against Sunderland was a "must-win" for Everton, not only because of the need to pick themselves up following the defeat to Birmingham on Saturday but also because it represented an opportunity to get closer to the European places. So, with the first priority being three points, it would be churlish to criticise them too much for a sloppy second half because they were magnificent when it counted in the first half hour.

If the excellence of their performances at Arsenal and against Manchester City earned Everton's players plaudits, the first-half calamity at Goodison Park on Saturday that ultimately led to the Blues' early exit from the FA Cup has rightly garnered criticism from fans and manager alike.

Like the nadir at Hull City in November, the 2-1 defeat to Birmingham City will hopefully serve as a kick to the rear end for the team and spur a backlash to be aimed squarely at Sunderland in this midweek match-up between two teams who only met at the Stadium of Light on Boxing Day.

That day, Everton eventually recovered from conceding an early Darren Bent goal and grabbed a well-deserved point when Marouane Fellaini rammed home in the 85th minute. David Moyes's side dominated the game but, as they did at the weekend, they found crucial goals frustratingly elusive.

The manager has threatened to wield the axe on those he felt under-performed against Birmingham and if he is good for that warning, then Diniyar Bilyaletdinov will almost certainly find himself warming the bench this time around to the benefit of Leon Osman. The latter was an instantly positive change on Saturday and not only scored the goal that looked to have sparked a comeback, but overall he gave the team more balance and purpose. Bily had, unfortunately, had another wholly unproductive outing and will probably get some more time to ponder life from the touchline.

The rest of the midfield will probably go unchanged; though Landon Donovan was a largely peripheral figure in the cup tie, much of that was down to Phil Neville's insistence on belting the ball into the box at every opportunity, by-passing the right wing.

And Mikel Arteta is unlikely to start as he eases back into first-team action. He sustained a slight groin strain in a practice match on Monday so it's certainly too soon for him to be starting a match, but the chances are good that he will figure again as a substitute if that niggle has cleared up in time. 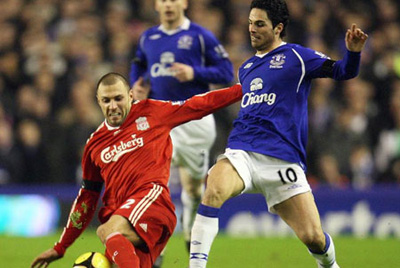 MIkel: hoping a slight groin strain won't preclude him from a place on the bench

Finally, there's Philippe Senderos who goes straight into the squad following his arrival on loan from Arsenal but, perhaps due to a lack of match sharpness as much as anything else, he too is unlikely to start despite Sylvain Distin's somewhat questionable display last time out.

Sunderland could include new signing Matthew Kilgallon who, if newspaper reports are to be believed, might well have ended up at Goodison instead of Senderos had Everton followed through with their interest in the defender. He completed his switch to Wearside late last week.

For Everton, with an incredibly challenging February programme just around the bend, this home game against Sunderland, a team they routinely beat on home turf, and Saturday's trip to Wigan are going to be vital for their hopes of closing the gap between themselves and the European places.

Tottenham's victory over Fulham this week leaves the Blues 15 points off 4th place — albeit with two games in hand — so three points against the Black Cats and a restoration of confidence after Saturday's disappointment will go a long way to setting Moyes's boys up for the challenge of getting back where they belong, in the thick of the hunt of Europe.