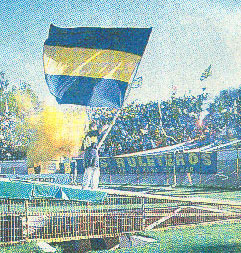 On Thursday 15 July, tickets go on general sale for the Everton FC v CD Everton game being played at Goodison Park on Wednesday 4 August. Here are another ten reasons to buy tickets:

11) See two Everton's for the price of one; actually, adult tickets at £10 are around a third of the price of a Premier League game. OAPs and juniors pay just £3.

12) The kids don't have to be up for school in the morning.

14) That Chilean who got send off for clicking heels with Torres. He played 84 times for Everton. Could only happen to him. Pick out the Chile Everton players that could make it in the Prem.

15) Cast your eye over our new blue home kit.

17) Support the campaign for cheap tickets. £10 for adults; £3 for under-16s and OAPs. If we don't turn up when prices are low, the club may as well keep them high.

18) A rare opportunity to take and sit next to family and friends who do not normally go to the game.

19) It's one major summer sporting occasion that David Beckham won't be attending, even though one of his tattoos reads: Hibbert Scores, Me and Viccy Riot.

Reason 21: Some fans are trying to get a singing area going at the very back middle of GT4. I'll be giving it a go and dust off some of the old songs too.

Colin,
Club box office is Monday to Friday 8am to 6pm. Saturday (non-Matchdays) 10am to 4pm . You may also wish to try the club website.

Joeynkoo,
No, article was sent to all Evertonian websites, or I think all.

To everyone, for more background information go to www.theruleteros.com

Got my ticket today. Looking forward to it (after all this build-up!).