The Costley Brothers – Was It Jim Or Was It Tom?

Thomas Halliwell Costley was born in Liverpool but began his football career in Blackburn before moving back to his birthplace in order to play for Everton. He was the younger brother of Jimmy Costley who scored the winning goal, for Blackburn Olympic, in the 1883 FA Cup final. Although Jimmy was never to sign for Everton he did represent his home town club in several attractive friendly fixtures where he deputised for his brother on the left wing.

Tommy, the fifth child of the family, was born, 5 March 1865, at Rathbone Street on the south side of Liverpool town centre. His father, who lists his occupation as a “Boatman” was named James while his mother, whose maiden name was Halliwell, was called Grace. The 1871 census finds the Costley family now living in one of the back courts off Duke Street where Grace, estranged from her husband, now has seven children. The 1881 census however, informs us that the family, with Grace as the Head of the Household, is now living at 1 Pollard Street in Daisyfield area of Blackburn. Tommy, now aged 16, now working as a Cotton Spinner, is a member of the Blackburn Olympic Football Club. In the summer of 1886 he left Blackburn and, after moving to back to Liverpool, signed for Everton.

Tommy Costley made his debut, 25 August 1886 against Liverpool Stanley and soon became the regular partner of George Farmer on the left of the Everton forward line. His arrival went almost unnoticed in the Liverpool press but the newspapers of Lancashire knew exactly who he was… Farmer had for a partner a player with the historical name of Costley – in fact – a brother of the one of Olympic fame. (Football Field 4 December 1886.) This statement goes a long way towards confirming the fact that it was Tommy, and not as previously thought Jimmy, who went on a play matches, for Everton, during their first season in the Football League.

The first competition game, played by Tommy Costley, took place on 30 October 1886 where over 10,000 people saw Everton defeat Bootle, at Hawthorne Road, in the first round of the Liverpool Cup. He then went on to win his first medal as Everton, having eliminated their main rivals, won the trophy with ease. 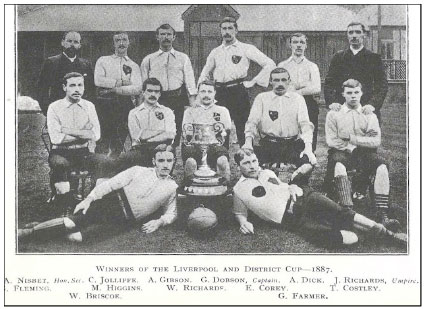 Next season, owing to the sudden influx of Scottish players, Tommy found himself playing reserve team football and took no part in the epic FA Cup battle against Bolton Wanderers. Early in the New Year, following the club's suspension, he regained his first team place and represented Lancashire, at junior level, against Northumberland. Tommy Costley, at the end of the season, was retained by Everton who registered him to play football for them as they became founder members of Football League. Everton were six games in to their first campaign when Costley made his football league debut, 20 October 1888, in an away match against Derby County where he was partnered, on the left wing, by a former Blackburn Olympic team mate whose name was Edgar Chadwick.

The match took place on a football pitch that was marked out in the middle of the local horse racecourse and the players changed in a sports pavilion that also served as the headquarters of Derbyshire County Cricket Club. Tommy, who appeared to revel in the occasion, scored twice as Everton won the game 4-2 in front of crowd which, it was reported, displayed their appreciation to a visiting side who played the game in a most sporting manner. Next Saturday, at Anfield, the two sides faced each other in match that was destined to go down in the history of Everton Football Club. Tommy Costley failed to score but assisted Archibald McKinnon to become the first Everton player to register a Football League hat-trick as they won the game by 6 goals to 2.

Tommy then played another three league games, scoring a goal against Burnley, before making his final appearance at Stoke on 15 December 1888. He twisted his knee during the first half and had to be helped from the field and took no further part in the game. No goals had been scored when the referee, in the fast-gathering darkness, brought about a premature cessation of hostilities. The match was not replayed and each side were awarded one point.

Tommy Costley made one more appearance for Everton, a Lancashire Cup tie against Higher Walton, but broke down again and had to leave the field. He then retired from the game. Next year, while working as a Caretaker, he married Fanny Margaret Shepherd in Liverpool and took up residence, off Wavertree Road, at 91 Chatsworth Street. They later moved to live in Holt Road. The 1911 census lets us know that the couple, who now had four children, were running a Fish and Chip Shop while living at 22a Prescot Road in the Kensington area of Liverpool.

Tommy, along with his wife Fanny, later retired to “Sefton Cottage” that was located in the Flintshire village of Dyserth, and became an active member of the local congregational church. The couple, on the 31 January 1939, celebrated their Golden wedding shortly before Fanny passed away. Her husband was later admitted to Cartrefle Hospital in St Asaph where he also died, 16 July 1941, and left all his processions to his daughter Mona Thompson of Great Crosby. Thomas Halliwell Costley, who played for Everton during their first season in the Football League, was cremated at Lanican Cemetery in Birkenhead.