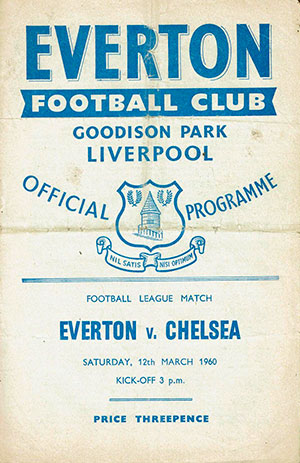 Fifty-six years to the day before our 12 March 2016 FA Cup tie with Chelsea, Everton took on the Londoners at Goodison Park in the First Division. The John Moores revolution was in full swing and manager John Carey was assembling a stellar squad. Bobby Collins, who had arrived in the final days of the Ian Buchan regime, had been joined by Jimmy Gabriel, Roy Vernon and Tommy Ring. Chelsea were not without talent either and selected a young Jimmy Greaves and winger Peter Brabrook, whom Harry Catterick would try to sign for Everton two years later.

Lining up at 3pm before just shy of 60,000 Goodison spectators were:

Everton were quick out of the blocks and nearly forced Crowther into scoring an own goal in the first minute. After sustained pressure Everton took the lead on the 10th minute. Collins picked out Lill who fed Vernon to twist and shoot home via a deflection. The reporter, Horace Yates, purred over the performance of the recently acquired Welsh marksman who had hit his sixth goal in four appearances:

Not only was his service to others something at which to marvel, with far-flung passes reaching their targets with uncanny accuracy, but always he seemed to do the right thing at the right time. It was his split-second appreciation of the possibilities which gave the Chelsea defence such a threadbare look. Add to that the proved ability to snap up scoring trifles and his credentials could scarcely be more apparent.

Two minutes after Vernon’s strike, Jimmy Harris’ flying header converted Tommy Ring’s left-wing cross to put the Toffees two goals to the good. In the 25th minute Ring was fouled and from the resulting free kick Jimmy Harris crossed for Bobby Collins to flick the ball nonchalantly past Matthews.

Ten minutes before half-time Parker released Harris and his centre to Lill was smashed into the net, with aplomb, from twelve yards by the winger

The Echo reporter was moved to state: This was an Everton rounding off superbly quick and decisive attacks with goals, the likes of which had not been seen at Goodison for years.

With Lill off the field for treatment, Everton pressed on and Ring saw his shot cannon off two opponents before rolling into the net. Although credited as the winger’s first goal in English football many commentators adjudged it to be an own-goal.

Finally The Pensioners responded after Meagan conceded a free kick. Greaves nudged the ball for Sillett to rocket the ball home from twenty-five yards.  Almost straight from the kick-off, Ring rounded Matthews to put the Blues 6-1 up – there was no doubting that this was his goal.

Seconds later the half-time whistle blew and the team left the pitch to a deafening ovation. The Goodison faithful speculated on whether double figures could be achieved. Such optimism seemed well placed when Lill stung Matthew’s hands shortly after the resumption of play but, remarkably, there would be no further scoring.

Jimmy Harris, who would lose his place with the arrival of Alex Young at the end of the year, recalls: “We were brilliant that day; the first-half was as good as anything. At half-time I thought we’d get ten like Tottenham had done once against us but we let them off the hook You couldn’t get a better forward line than we had that day. I was centre-forward with Mickey Lill on the right wing, Tommy Ring on the left wing plus Vernon and Collins”

Horace Yates commented, poetically, on a future full of promise for Carey’s newly assembled team: This new Carey creation, in a few short weeks had already begun to roll back the dust-laden curtains which had fallen and lain so heavily to cloak a distinguished past.

Those fortunate enough to see the revitalised Everton at the start of the 1960s were treated to some of the most exhilarating, attacking football witnessed since the club’s formation back in 1878. However, with the thrills came spills and the very next week the Toffees crashed to a 6-2 defeat at The Hawthorns followed by a home loss to Newcastle. It was this inconsistency that saw Carey sacked in infamous circumstances a year later, to be replaced by the more pragmatic, but ultimately successful, Harry Catterick.