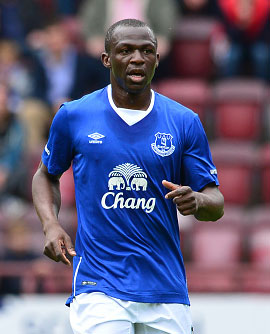 Kone scored his first hat-trick in Everton's colours, doubling his tally with the club in the process

With just one home win in the Premier League all season and no clean sheets since April, Everton's home faithful hadn't had much to celebrate prior to this match. Fortress Goodison it certainly hasn't been, but while Tim Howard's goal would be breached on two more occasions this afternoon, the Grand Old Lady was at least treated to a feast of attacking football.

This was a game that had a bit of everything Everton under Roberto Martinez – lightning counter-attacks, defensive naÃ¯vete, a hamstring injury, a header conceded in the six-yard box, sublime forward play, a lead thrown away, Goodison seething... you name it.

What you don't normally associate with Everton, though, are Arouna Kona goals. Before today, the Ivorian had three to his name in two-and-a-half years, – his role in the team more as a foil for Romelu Lukaku than being the main man. But against a hapless Sunderland defense the Ivorian took centre stage, the man-of-the-match champagne and the match ball. He even threw in an assist to boot, one which appeared to have put Martinez's side on course for an easy afternoon.

Kone's superbly-weighted ball over the top of the Black Cats' defence sent the marauding Gerard Deulofeu clear to drive towards Costel Pantilimon, turn inside the last man and tuck his shot through the goalkeeper's legs put the Blues a goal up after 19 minutes.

That goal had helped confirm the shift in momentum in Everton's favour following Sunderland's unexpectedly dangerous start. Twice in the first quarter of an hour the ball had come back off Tim Howard's right-hand post: first when Steven Fletcher cut the ball back for Patrick van Aanholt and the Dutchman swept a shot onto the "woodwork"; then when Sunderland countered off Ross Barkley's poorly-placed pass, Howard denied Jermaine Defoe with an out-stretched leg and Adam Johnson bounced a shot off the frame of the goal.

Barely disrupted by a hamstring injury to the unfortunate Bryan Oviedo and the consequent introduction of Brendan Galloway, the Blues began to assert themselves further as the first half progressed and, after Seamus Coleman's drive had been beaten away by Pantilimon, Kone doubled the lead by finishing off a wonderful passing move outside the visitors' penalty area.

Gareth Barry fed Barkley who, in turn, found Kone and when he picked up Lukaku's return pass the chance appeared to have got away from him but he struck a superb left-foot shot high into Pantilimon's net to make it 2-0. The striker's all-round link play had been excellent up to that point, justifying his inclusion in the starting XI for a League game for the first time since the goalless draw at Swansea in September, and better was to come in the second half.

Everton would throw away the comfortable two-goal advantage they had established by the fifth minute of the second half, though, bringing an increasingly expectant Goodison back down to earth as a veil of gloom and deja vu descended – briefly – over the stands. A speculative ball forward by Sebastian Coates in the third minute of first-half stoppage time looked to be a routine assignment for John Stones to deal with but instead of coming across Defoe, he gambled on the bounce and lost as the striker toed it past him, set himself and then cracked a shot goalwards that took a decisive nick off the defender's toe and over Howard.

Perhaps it was because the middle of the field had been so open in the early stages that there had been little need to but Sunderland had not made much attempt to test Everton's now infamous vulnerability to aerial balls in the first period. The first time they did, though, they struck gold. Coleman was left without sufficient assistance from Deulofeu in dealing with two Sunderland attackers and Van Aanholt profited from the time afforded him to whip in a right-foot cross that Fletcher rose to meet and plant into the corner of the goal with a header.

The Toffees' response was to simply resume testing the Black Cats' porous defence by attacking with pace and direct balls and, after Deulofeu had picked up a booking for another embarrassing dive in the box and Kone had dragged a shot wide, they restored their lead in the 55th minute. Deulofeu was again the provider of a wicked ball into the Sunderland box that looked destined to be headed home by the stooping Lukaku until Coates' boot did the job for him, steering it into his own goal.

Five minutes after that, the two-goal lead was restored thanks to an absolutely sublime forward pass from Deulofeu that sent Lukaku away into a one-on-one with Pantilimon that he completed with aplomb, rounding the Romanian keeper and sliding the ball into the empty net.

And two minutes later, Kone extended the lead to three, finishing off a rapier-like Everton counter attack that had James McCarthy bursting forward ahead of Barkley, collecting the 21-year-old's layoff and then putting the Ivorian in past the defence with a neat reverse pass where he fired in from the angle. It capped off a devastating seven-minute surge of irressistable attacking football from Everton and it allowed Martinez to pause, withdraw Deulofeu and throw Kevn Mirallas into the action in a bid to get him firing again and, perhaps, back among the goals.

The Belgian almost managed it, rounding the 'keepern in the 73rd minute in a similar fashion to Lukaku but finding his path to goal blocked by two Sunderland defenders and then curling a shot inches past the post a couple of minutes from the end. In between, though, Kone had ensured that he would grab the headlines by completing his first Everton hat-trick, thanks to a world-class assist from Lukaku.

The Everton No.10 collected the ball in space just outside the box, looked up and spotted his strike partner before bending a pin-point cross with the outside of his boot that Kone rose to head deftly inside the post to make it 6-2 with 13 minutes left.

Sunderland were spared further bloodshed as the Blues eased off the pedal a bit in the final 10 minutes and Duncan Watmore, a thorn in Everton U21s' side over the last couple of years, set about trying to earn a consolation for the visitors with some energetic attacking in front at the Park End and forcing Howard to paw away his lobbed attempt when clean through a minute from time. Howard also had to parry away fierce drives from Defoe and Yann M'Vila in stoppage time but there would be no further goals for the Black Cats.

Everton's defensive fallibility continues to be a concern and will continue to be exploited by better or more organised sides –&8211; that susceptibility to high balls into the box is likely to be tested sternly at Upton Park next weekend, for example. And as the more experienced head at centre half in Phil Jagielka's absence, Stones's occasional lapses in judgement and propensity to allow opposition forwards too much space could become more of a concern if it becomes a trend rather than temporary evidence of a continuing learning curve. It's particularly important given Funes Mori's desire to get forward and the fact that Deulofeu cannot always be relied upon to track back and perform his defensive duties.

It's hard not to simply brush those aside for a moment, though, and just enjoy some truly excellent forward play from Martinez's men. Orchestrated magnificently in midfield by skipper Gareth Barry – on any other day he would have been a shoo-in for player of the match – aided by the greater license to get afforded to McCarthy and then executed by a forward line of Deulofeu, Kone and Lukaku that was simply irresistable at times, it was an attacking exhibition to savour. It demonstrated the potential that lies in this Everton team when they play at speed and just how deadly they can be in the final third when that pace and directness creates havoc in opposition defences.