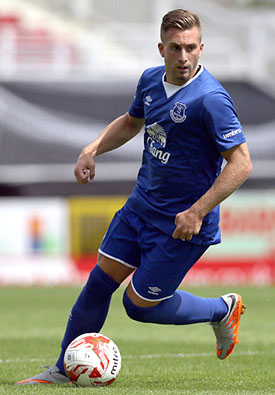 Another brilliant performance from the increasingly impressive Gerard Deulofeu

For the return of Premier League football and the visit of Aston Villa, Roberto Martinez named an unchanged Everton side, with no Leighton Baines risked at this stage of his long recovery from double ankle surgery. Kevin Mirallas was left kicking his heels on the bench where he was joined by Tom Cleverley, who was being reintroduced to first-team football gradually as he comes back from two months on the sidelines with ligament damage.

Everton kicked off and played keep-ball until they could play longer forward balls to Lukaku and then Kone. But Villa set their stall out early on, making Everton work for openings. Deulofeu's first chance to run was stopped by Richardson whose next contribution was to stop the Spaniard with a forearm to the neck. Barkley's free-kick was wasted.

Deulofeu did get a cross in that was too high for Lukaku before Coleman forced a shot on Guzan but was deemed to have fouled Richardson. But a very fluid move from deep down the middle, involving excellent first-time passes from Stones, a brilliant flick from Barkley to Lukaku, plying in McCarthy saw a shot from Deulofeu, parried by Guzan and tapped in at the far post by Barkley for a very nice opening goal.

Villa won a corner and threatened briefly before Everton were surging forward again, but Blues possession was less assured as the Villains accepted they needed to play some football. Magic from Deulofeu set up Kone but Guzan saved his effort brilliantly as the game opened up considerably.

Deulofeu did it again, driving in from the left and almost playing in Lukaku but it was Coleman who rescued the ball at the byeline and Lukaku casually nodded home his perfect pulled-back cross to make it 2-0 before the half-hour.

Everton were now showing great confidence and turning on the style with some beautiful passing moves in midfield. But Villa played a little football of their own after Coleman lost possession, although on the turnover, Deulofeu surged forward again but this time his cross to Lukaku was intercepted. Deulofeu then played in a great ball for Kone that Guzan smothered well.

Another forceful attack down the middle saw Kone with a lot of work to do to keep the ball away from Guzan and Barkley was there to slot the loose ball home. 3-0.

VIlla switched Gueye for Sanchez and drove at Everton with some verve after the break, Howard needing to be alert to danger from a poor pass-back by Funes Mori. The game was flat as Everton became decidedly unadventurous in response to Villa's increasing self-belief, Howard having to stop a fierce drive from Richard's.

But order was restored with another wonderful passing move through the middle with Deulofeu passing superbly to Barkley whose first-time layoff was in perfect stride for Lukaku to drive confidently into the Gwladys Street net. 4-0.

A clever flick by Ayew off a Villa corner did not faze Howard, who had stayed on his line, and Howard had to save from Ayew again, with another surging Everton move ending when Deulofeu stalled and then dived. Deulofeu had a better call for a penalty when he ran into Richards but Villa were still presenting a threat and Everton couldn't really relax, even at 4-0.

Deulofeu had run himself out on 70 mins, an ideal point to bring on Mirallas and go for a big win, but Martinez seem satisfied to watch keep-ball at the back as Everton allowed Villa to come at them. But it happened on 73 mins, with Osman also replacing Barkley.

Mirallas was relishing his chance, and got into the heart of a great move flicking the ball out to Galloway who lashed a vicious goal-bound volley that caught the foot of an acrobatic Mirallas, bizarrely flying through the air between him and Guzan, denying an almost certain goal.

Mirallas then fired in a tremendous free-kick that was just curling outside of the near post with help from Guzan. But the corner was taken short and came to nought. Gibson came on in place of McCarthy.

Lukaku and Guzan collided heavily after both went for a loose ball. A fantastic cross-ball from Gibson was worth a goal by Mirallas, who struck it almost perfectly on the volley, missing the goal by 6 inches.

Mirallas was desperate to score, lashing a powerful shot but too close to Guzan in added time as the Blues sealed an impressive if, in the end, somewhat restrained win against the team at rock bottom of the Premier League.