Lukaku scores again but Leicester's double-act comes out on top 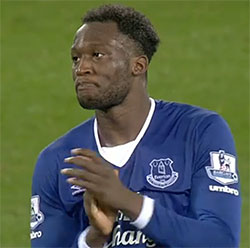 It was billed as a battle between two of the Premier League’s most dangerous attacking partnerships and the meeting of the Premier League's top goalscorers as Leicester City, the team confounding all prediction and logic by sitting top of the pile heading into the festive season, came to Goodison Park.

Romelu Lukaku may have scored, taking his tally in the League to 13 and extending his scoring streak to seven consecutive matches (eight in all competitions), but Gerard Deulofeu endured an afternoon of frustration and the Jamie Vardy-Riyad Mahrez double-act came out on top, as did the Foxes who deepened the demoralisation in the blue half of Merseyside by plundering all three points.

Vardy didn't find the net but he drew the reckless foul by Tim Howard for Leicester's second penalty – both converted with a aplomb by Mahrez – and set up Shinji Okazaki for what proved to be the winner as Roberto Martinez was left counting the cost of more defensive fallibility and a failure to either take or make enough chances at the other end.

Annoyingly, the match played out mostly the way you'd have expected it to given the modus operandi of Claudio Ranieri's side this season. Everton controlled the game for long stretches, dominated possession and always looked the most likely to score if they could just find a telling final ball but were undone by the visitors' effiiciency in capitalising on the few chances that fell their way.

That the home side weren't able to make their territorial superiority tell was credit to the Foxes' well-organised defence where Robert Huth's absence, on paper a boon for the Blues, was more than compensated for by Marcin Wasilewski and Martin Fuchs largely shut down Deulofeu's game, restricting him to just a couple of genuinely dangerous moments before he was eventually withdrawn in favour of Aaron Lennon with 17 minutes left.

If there was a sense and a hope that Everton, as a club with Champions League aspirations, could be the team to pop Ranieri's bubble – after all, of the other four teams in the top five Leicester had faced three prior to today and failed to beat any of them – it was only enhanced by the manner in which they assumed control of the game from the outset. Deulofeu was looking lively down the right flank and Barkley also looked up for it, weighing in with a couple of impressive defensive tackles in his own half as the home side signalled their intentions.

Their infamous lack of killer instinct raised its head, however, in the couple of minutes before, once again, they conceded the first goal. First Arouna Kone, selected again as Martinez opted consistency in personnel over demonstrated form over the last couple of games, passed up the chance to put his foot through the ball from 18 yards after the ball broke to him off Wasilewski's boot; then Lukaku floated a beautiful cross to pick out Barkley at the far post but rather than attempt to bury it with a first-time header or bring the ball down to shoot, he badly mis-hit a volley from close range.

A Fuchs cross that Ramiro Funes Mori had to head over his own bar aside, Leicester hadn't really been in the contest from an attacking point of view but they were gifted the lead when the Argentine mis-judged a flick-on from a harmless throw-in down the visitors' left, tried to shepherd the ball out for a goal kick and ended up hauling Okazaki to the ground. Referee Jonathan Moss pointed to the spot and Mahrez did the rest.

Just as they did against Crystal Palace in the last home game, the Toffees hit back and were level within five minutes when Lukaku swept home in typically predatory fashion after Barkley had been foiled first by Kasper Schmeichel's foot and then Andy King on the goal line. Like 12 days ago, however, they weren't able to take the shift in momentum and go on to win the game.

Though they employed a mix of direct mostly fruitless long diagonal balls with passing interchanges through midfield, Everton always looked more threatening when working things down the flank, with a heavy bias to the right side where Deulofeu continued to be thwarted by Leicester bodies getting blocking his cross behind. Coleman, meanwhile, forced Schmeichel to bat a cross-cum-shot over and referee Moss inevitably waved away claims for handball against Fuchs in the Leicester box but as the match moved towards the hour mark, the visitors began to raise the temperature of their own game and it became a more end-to-end affair.

Vardy skidded a shot past the post and, in a cautionary moment for how worryingly open Everton were becoming at the back, Leighton Baines had to scamper across brilliantly to block a shot as the home defence was caught out-numbered as Leicester counter-attacked. But it was the oceans of space in midfield afforded to Mahrez that became all the invitation he needed to advance and then slide a perfectly-weighted ball in behind Stones for Vardy who was then sent sprawling by Howard as he rushed off his line. The Algerian midfielder sent the American 'keeper the wrong way with another calmly-taken penalty.

Under Martinez, the Blues have become accustomed to playing with fire at the back so it wasn't really a surprise when, five minutes later, the otherwise impressive Coleman elected not to take a throw-in down the line but threw it short to Tom Cleverley, leaving the home defence exposed when the Irishman's attempted clearance came off Marc Albrighton's hands and fell straight to Vardy. A couple of touches and a square ball to Okazaki as John Stones battled in vain to recover from his starting position by the corner flag and it was goal number three. There was a strong case for handball against the midfielder – with the appallingly bad Moss in charge, Everton have now lost five of their last six so no shock that nothing was given – but there could be no excuse for more slack defending and a lack of shape and organisation at the back.

Again slow to make much-needed changes, Martinez was finally forced to act by withdrawing the ineffective Kone and the frustrated Deulofeu, with Lennon and Kevin Mirallas thrown on to see if they could turn the tide. Initially it was Barkley who went close when the ball sat up nicely from 25 yards out but his goal-bound shot was deflected wide and Lukaku hammered a presentable chance over from the angle and then saw a direct free kick shortly afterwards sail disappointingly over.

The Blues' persistence paid off two minutes from the end of the regulation 90, though, when Barkley played Mirallas in with a breathtaking heel flick and the Belgian fired home the goal that could have sparked a frenzied search for the equaliser over the remaining five minutes of play. Unfortunately, while Barkley had one last shot that he despatched too close to Schemichel and was saved, there just werent't enough opportunities and Howard had to make one last save with his leg to deny Leonardo Ulloa at the death.

Just two wins from the last 10 matches and only five from 17 so far this league season tell the unfolding story of another season of under-achievement at Everton. This time there is no World Cup hangover or Europa League to blame and if there have been key injuries to point to, perhaps only that to Phil Jagielka can really be cited as a significant factor in the Blues' recent record.

The England international undoubtedly brings more leadership to the central defence where two young centre-halves continue to perform well enough individually but who aren't cutting it as an effective and watertight partnership and are being punished for any lapses. That is exacerbated by the uncertainty created by Howard who perioidically pulls off good saves still fails to command his area, remains vulnerable to crosses – he flapped at one in ludicrous fashion late in the first half – and belied all his experience with a rash foul on Vardy for the second goal.

A gruelling run of 10 games against all of last season's top sides is safely in the rear-view mirror but the last seven from a section of the fixture list that was supposed to be a goldmine of points for Martinez's team have yielded just two victories despite performances that arguably merited at least four more. Wins in just two of those would have the Blues sitting nicely in fifth place over Christmas, with the resurgence from last term's slump still in place. Instead, the Blues are drifting in mid-table again, six points off the top four, as many off the bottom four and searching for the winning mentality that Martinez keeps saying is the key objective.

Martinez now needs to ring the changes to a side has been largely unchanged for four matches now but has only delivered three points from the 12 available. It's time that Kone made way and Mirallas was given a chance to win back his place; Deulofeu could probably use a rest to refocus given how inconsistent he has been lately; and Joel Robles should absolutely be handed the gloves in preparation for the all-important League Cup semi-final.

How the Catalan responds during a festive period that was alarming this time last year in what it revealed about the manager and the lack of true depth in the key areas will be instructive in what this Everton side can achieve this season. Three eminently winnable games follow before the first leg of the cup tie against City but the attractiveness on paper of the fixtures has been no guide in recent weeks; there are no more easy games in the top flight any more and if there are, Everton have already had them in the form of Aston Villa and Sunderland at home. It's time to deliver, because in League terms it could be over by the first week of January.