Three splendid goals from the Blues 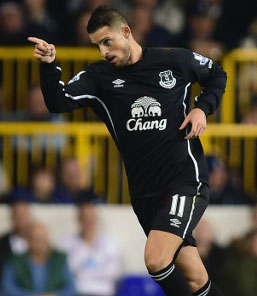 Kevin Mirallas: back on the bench after missing three games with a tendon injury

Everton built on the midweek win over Newcastle with a splendid 3-0 win over Stoke City, Joel Robles keeping another clean sheet in goal.

No visa clearance for new signing Oumar Niasse but Romelu Lukaku was able to play despite coming off at half-time against Newcastle on Wednesday. Mirallas and Deulofeu were on the bench with Tim Howard and John Stones both still out injured.

Stoke kicked off and showed a little more urgency than Everton but Oviedo did get forward and won a corner that Cleverley swung in for Funes Mori, but his header was deflected behind, it should have been for a second corner – not given,

A quick break created by a brilliant backheel from Barkley set a telling move going down the middle with Oviedo playing in Cleverley and he won a soft penalty when he drew the trip off Butland, Lukaku converting from the spot, straight down the middle.

Stoke continued to press the visitors back but Everton's defence stood strong. However, without John Stones, they were having difficulty playing the ball out of defence at times. Shaqiri was always a menace down Everton's left but Oviedo looked to be enjoying the challenge.

Lukaku was not getting much service from long and mostly wayward balls, but Everton did win another corner that was superbly delivered by Cleverley and superbly headed in by Coleman, runnibg at the ball with purpose and getting ahead of two defenders to direct an excellent finish beyond Butland.

McCarthy went down injured but recovered, then Barry was caught on the elbow by Diouf and went down in some pain. Then, with Barkley off the field having a nose bleed staunched, Lennon was shaply on to a lose cross ball and off to the races, beating Butland Derek Temple fashion, a lovely finish to make it 3-0.

Robles was positioned well to stop a sharp move into the Everton area, as 5 minutes of added time were played out before the break.

A strong challenge by Barkley won the ball deep in the Everton half and the young star went on a great run that ended in a shot into the side netting after a very well-worked one-two exchange with Lukaku that split the Stoke defence asunder..

Some tremendous improvisation from Barkley preceded a fantastic cross laid on a plate for Lukaku to power goalward but a reaction touch from Butland was enough to push the ball up and onto the bar.

Lennon did drilliantly to drive in past two defenders and cut back for Lukaku but the big man leant back rather than attacking the ball and could not convert another golden opportunity.

Everton were required to be diligent in defence, Oviedo and Funes Mori with crucial blocks either side of a fine stop by Robles.

More excellent, if a little hesitant work from Barkley ende with Lukaku setting up McCarthy for a fine drive that really should have been on target. Barkley again danced around three Stoke defenders looking for the strike but taking too long to pull the trigger.

KonÃ© came on and immediately got to run in at Butland with the ball, but the keeper won this one when KonÃ© should really have scored. Then, from the resulting, corner Funes Mori all alone at the far post, headed wide when it seemed easier to bury it into the Stoke net.