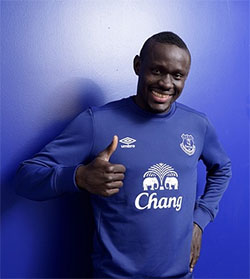 Everton were unchanged as they went in search of what would be a fourth consecutive victory against West Brom this afternoon. But plans were set awry with an early goal against off a corner and it was classic parked bus defending from the visitors.

Joel Robles continues in goal while Tim Howard is deemed fit enough to make the bench; John Stones remain sidelined but there is still no Oumar Niasse in the matchday squad, with mostly the old guard on the bench – no opportunities for any young talent coming through.

Everton kicked off and played pass the parcel at the back for the first minute before starting to apply some pressure in the West Brom area, Lennon and Coleman looking particularly lively, and winning an early corner that Foster gathered on the second attempt.

Sessegnon was caught by Oviedo but the free-kick was booted clear by Gareth Barry. Everton then probed again, Barkley playing in Oviedo for a good feed that had Foster down sharply at the near post. But when possession turned over, Everton were standing off the visitors rather than pressing.

Chester was judged to have caught Lennon but Oviedo curled the free-kick in too hard, beyond everyone. Lennon was being a terrier scampering at the West Brom defence and trying to force errors but McClean won the Baggies first corner, headed on by Olsen and forced in at the far post by Rondon as the Everton defenders ball-watched the looping header that left Robles stranded, with no-one on the post to head it away. Painful goal to give up.

The goal enlivened the visitors, who continued to press forward, pinning the Blues in front of their Park End goal. Barkley got forward but was dispossessed. The Blues pressed a little better but Cleverley lost possession and then Lennon had to play back into his own half as the bus was parked in front of them, denying space. A good run in by Cleverley and feed to Coleman won a corner that Oviedo delivered well enough but West Brom broke and Lennon gave away a foul.

Gareth Barry played a superb ball through to Lukaku who turned well and crossed for a glancing header that Coleman did not get enough on. West Brom doing their best to waste time on every stoppage as Goodison fumed. Jagielka ran forward and played a pinpoint pass to Lukaku's feet but it rebounded with force rather than being controlled by the big man. Everton attacked with more energy, Lennon crossing well but Jagielka's follow-up from distance was wayward.

A great give and go by Barkley saw his shot deflected the wrong side of the post and Funes Mori was there off the corner to power in a header that was blocked away off the line. Fine footwork from Lennon won another corner delivered well by Oviedo. A ball falls to Lennon whose shot cannoned up and almost curled in over Foster. Then Coleman's cross was taken well but his power drive from a narrow angle flashed off target. Really good pressure from the Blues but they looked open when The Baggies finally broke out, Rondon hitting the side netting.

The tremendous pressure resumed and Ross Barkley curled a lovely snapshot goalward with Foster well beaten but not the post, as it bounced agonizingly back into play. A tremendous curling cross by Cleverley smacked into the angle, and yet another fine Oviedo corner from the right causing havoc but Lukaku was unable to control his difficult shot.

Lennon and Coleman danced through to threaten the goal but a knot of three defenders contrived to block his efforts. Trying to work the ball in with repeated probing but it was Lukaku again, with another ball played directly to his feet with back to goal and he bizarrely fired it backwards, straight to a West Brom player who almost set up Berahino for an opposition attack.

Lennon produced more brilliant magic to dig out a cross fro Barry to head goalward. That won a corner that again was delivered superbly by Oviedo but the B;ues could not fashion a clear chance at the far post.

Hostilities resumed after the break, Blues still struggling to break through or make a clear opening, Coleman lashing in a shot that hit Lukaku. A free-kick saw McCarthy's follow-on shot blocked. Ref Oliver finally booked Fletcher for taking too long on a free-kick. McClean was then booked for a late tackle on Coleman that looked a lot worse than it really was... all helping to fire up the home crowd.

McClean clipped Lennon but Oviedo's cross from the free-kick was too low, more shots blocked before McCarthy's low shot was straight at Foster. McClean was then wisely replaced by Brunt. In a rare tactical change, Martinez replaced Cleverly (who had been a spark for the Blues) with Kone to partner Lukaku. And he looked to set up Lukaku but again the ball bounced off his feet; however, he did lay off a chance that Barry powered inches over as the Blues pressed and pressed with no reward.

On the break, Rondon played in Brunt for a strike across the Everton goal that looked more dangerous than it was, Robles covering it well. Another potential breakout by WBA forced Barry to hold back Berahino at the price of a yellow card. And off the free-kick, Barry again used his body cleverly to thwart Dawson.

More persistent attacking came to naught for the Blues, shots being blocked repeatedly as they sought a way through to goal but with no avail. Lennon again forced a corner, but the defence held solid as Victor Anichebe came on against his old team in place of Rondon. An Oviedo shot almost crept through, then Lennon made way for Deulofeu, some of the crowd not appreciating the departure of Lennon. Foster booked for more time-wasting.

Deulofeu won another corner and Barkley tried to screw it goalwards. Deulofeu then ran at WBA, played in Coleman for the cross that went over Lukaku and seemed prime for Kone behind him, but the ball was headed weakly at a defender. A great cross from Deulofeu, played back to Barry who tried to pick his spot from 5 yards but Olsen blocked it.

Evans seemed to slice Coleman down in the area but not given as he got ball as well as man. Osman then replacing James McCarthy. Brunt lunged in on Deulofeu but the set piece was again solidly defended away by the intransigent West Brom defence, with Everton perhaps guilty of making extra pass after extra pass, rather than dribbling in or firing off more shots whenever possible.

Barkley was finally set up for a golden chance from the 18-yard line but spooned under it and it flew high and wide. Deulofeu won another corner on the right, and powered it into the mix well enough but no end product as the West Brom defence refused to yield. Osman's clever feet not clever enough to keep a looping volley down and on target, as the 4th official signalled an additional 5 minutes.

The attacks continued, Barkley barged over, then heading over a nice looking cross that should have been buried. Kone then crossing right in front of Lukaku, but no attempt on goal, Everton's attacking prowess had totally met its match, leading to Everton's sixth home defeat of the season.