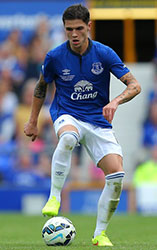 Everton gave Matthew Pennington his Premier league debut in their penultimate home game of the 2015-16 season this weekend against Bournemouth, with Â£13.5M acquisition Oumar Niasse making his first start since joining the club three months ago.

Tim Howard returns as captain for the first of his two farewell games in front of the Goodison crowd, while Gibson again starts in place of the injured Gareth Barry. Coleman and Jagielka are also missing through injury while Ramiro Funes Mori is suspended.

Roberto Martinez is under great pressure from fans who have mostly had enough of his 'philosophy' and continually failed promises of 'jam tomorrow', but the Everton stewards are renowned for preventing banners within Goodison and clamping down on protests from the stands.

The visitors kicked off with Dan Gosling on the bench but Everton took possession and structured a couple of early attacks. Everton scored through Cleverley. He was found by Barkley following a neat bit of play down the left flank and, after taking a tidy first-touch to set himself, drilled a low, left-footed finish past Boruc and into the bottom corner.

But Everton almost immediately surrendered the lead in a fashion that was typical of the season. Pennington was shirked off the ball by Wilson who slide a cross into the area. It was helped on by King to the unmarked Pugh who, at the back post, who had the simple task of slotting a finish past Howard. Not the best way to celebrate his farewell...

The game had the pace and intensity of an end-of-season affair, the crowd getting a little concerned in the bright sunshine as Blues attacks were at best uninspiring. Cleverley had another attempt that was well off target.

Niasse started to get more involved and some of passing looked good, some awful with a dreadful giveaway direct to the opposition that then led to a corner for Bournemouth, headed wide at the far post.

Barkley sprung into life thanks to some good work by Niasse but his shot was high. He almost got in on Boruc but the keeper was then out quickly.

Some poor corners from Cleverley didn't help the mood although Niasse came close to converting one with a flick. But most attention before half-time was for the sound of a plane overhead, and a banner trailed behind: "TIME TO GO ROBERTO NSNO".

A massive reception after the break for Tony Hibbert, coming on to replace Mo Besic, his first appearance in 16 months. He looked a little rusty in his first touch. At the other end, Niasse was doing a good impression of Lukaku watching the ball bounce past him.

There was a sudden burst of slick passing that took everyone by surprise, Gibson out to Lennon, Niasse to McCarthy, then in for Barkley but he could not take a shot. This at least led to some pressure on the Bournemouth goal but no clear chances being created and The Cherries were soon off the hook, Wilson running at the Baines.

King was given a lot of space but chose to shoot early, low and wide past Howard's post. Wilson was next to attack the Everton goal, getting off a good shot that Howard may have touched behind. Niasse was replaced by Lukaku on the hour.

Pennington did well to defend against Wilson but Ritchie picked up his clearance and was fouled by Gibson (Yellow card) for a dangerous free kick with Ritchie getting the ball over the wall and into the hands of Howard.

Straight up the other end, Barkley played Lennon in wide right and his bobbling cross looked to to have been missed by Cleverley but a superb left-foot strike from Baines coming in the left channel rocketed the ball into the roof of the Gwladys Street net.

That produced great relief and a much more lively tempo of play from the home side, with Tony Hibbert getting forward to great shouts of "SHOOT!!!", Barkley even setting him up for a shot that turned into more of a pass back to Boruc.

A couple of subs by Eddie Howie changed the largely one-way traffic, and a couple of half-chances almost saw another equalizer from the visitors, Stanilas and Afobe creating some danger but no goals.

Stones, who had been superb commanding the defence, strode out of defence and looked imperious with the ball at his feet, energizing things going forward, but he got pushed out to the corner flag and, although he kept possession, the impetus was lost by the time the ball found Barkley.

Wilson was always causing trouble and he pulled a brilliant cross back from the byeline right onto Afobe's head but somehow he missed an open goal. It was Wilson's final contribution; Grabban replacing him with 12 minutes left.

Stanislas looked to have beaten Hibbert to get a shot off but for a superb piece of work by the veteran Evertonian to chase back, slide in and block it, much appreciated by the Goodison crowd.

Past the 78-minute mark and no mass movement of fans to the exits in silent protest. Instead, a great reception for Kieran Dowell, replacing Barkley for the last 5 minutes or so. And he was keen to put pressure on a Boruc clearance. But the ball was soon down the Everton end, Ritchie striking the ball just wide.

Lukaku again was caught passively watching a ball bounce around him, totally incapable of making a decisive touch to control the ball, which wound up going back down the other end. Maddening from a supposed Â£50M striker.

Into 4 minutes of added time and each spell of Bournemouth possession caused consternation and panic for the Blues all round, two corners being given up. But the Blues kept their nerve a pulled off a much-needed win â€” their first in seven Premier League games, and a real rarity at Goodison Park this season.

At the end, a couple of "Martinez Out" banners but no mass protest at the incompetent management of Martinez, the pressure no doubt relieved by this rare home win.

As the crowd (and the targets of their protest) dispersed, a small group of Evertonians (50-200, estimates vary) remained in the Lower Gwladys, with banners and chants protesting the continuation of Roberto Martinez as manager.