Everton have revealed the new away kit for the 2015/16 season which will get its debut in the team's second Barclays Asia Trophy fixture on Saturday in Singapore.

Designed by Umbro the change strip is predominantly white with a crew neck, grey hoops on the arms, black shorts and white socks.
Like the home shirt, the 'NSNO' insignia is featured on the back of the neck area. 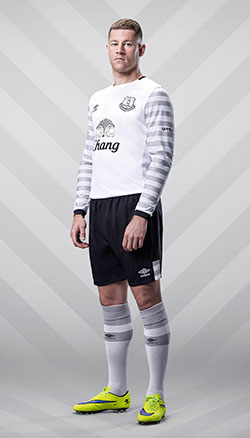 It is constructed using highly technical performance materials, including a lightweight textured mesh on the back of the shirt for maximum ventilation. Shaped mesh underarm panels offer maximum fit and movement.

Speaking about the new change strip away kit, Romelu Lukaku said: “The new away kit looks great. It's fresh and smart and we are looking forward to wearing it in Singapore for the Barclays Asia Cup, as well as in the upcoming season.

This season Everton and retail partner Kitbag have rolled out a new Click and Collect service that offers a more convenient collection method for supporters who order merchandise online.

As well as still being able to collect their purchases from either of the two Everton stores, supporters are now able to pick up their parcels from any of the 5,000 Hermes Click and Collection partner sites throughout the UK. For more information about the Click and Collect service, visit evertondirect.com.

More information on the 2015/16 kit is available at www.evertonfc.com/born. To pre-order the new kit visit evertondirect.com, Everton One or Everton Two.

But I really like the short-sleeved version that Lukaku is sporting there. But then I was a big fan of the white/grey striped number from the late Ă‚’80s which his harks back to.

Colin Grierson
7 Posted 14/07/2015 at 18:29:40
Is it just me or is there a hint of Ă‚’the boy in the striped pyjamasĂ‚’ about this kit. There seems to be a distinct lack of aesthetic nouse about our great club.
Paul Ellam
8 Posted 14/07/2015 at 18:29:04
Hmm...well obviously I am in the minority but I quite like it.
I like us to stay fairly rigid with our home kit but the away and 3rd kits I like us to go a little different.
That way, the traditionalists and the radicals all get a choice!
James Ridley
9 Posted 14/07/2015 at 18:53:57
It looks good to me. A bit different from the norm. Damned if you do and damned if you don't at the mo. Keep it the same as previous years everyone says 'boring' change it everyone says 'rubbish'.

Lets start by being positive and maybe the team will smash those first 10 games and we are off and running for a cracking season!!

I won't really be arsed what it looks like if it's the kit we finally win at Chelsea wearing, it's the team not the kit that's important.

My personal favorite away strip was the old school classic cream classic of 2010-11, the one we won at Chelsea in, the FA Cup penalty shootout.

Hateful garbage.... at least terrible away kits were fashionable back then. Today there's just no excuse.

Great, last year's shirt got lost in the post (which I quite liked the look of) and neither home nor away this year inspire me to order it. Sigh, back to my old old old shirt.

Patrick @18, you're correct Le Coq Sportif mid eighties all silver/grey outfit. My fave is still the cream 2010-11 one with the navy shorts and hooped socks. There's still the 3rd kit to come so some of the moaners may be appeased.

Who actually designs this stuff?

Here you go, quite traditional really. White with black shorts was mostly are change kit for about 60 years. And the last times we have won anything silver / grey was our colour.

I love it and hopefully our boys will win some football matches in it!

Possibly the worst umbro kit since that one they did in the mid 1990s that was also white, but looked like you'd been run over by a tractor.

Clearly, Everton have actually gotten something right by targeting youth with the away jersey design... unlike the over-40 crowd of grumpy old men on TW....

The so-called 'top clubs' promised to stop fleecing the fans with this annual rebranding years ago and have done nothing to halt the rip off since... If yer know yer 'istory etc...

You don't know where you are - I thought the Fisher-Price badge committee had been disbanded.

Actually you might be right Jamie, re TWs over 40s.

For instance, I'd stick the 14-year-old on a training ship for six months, just for using the word 'awesome' to describe a shirt. Sure, that might seem harsh, but he would thank me in later years.

I mean I genuinely feel for today's teenagers who use the word 'awesome' to describe a McFlurry or a 50 cent (now 50 drachma?) track.

Should they ever encounter the Pyramids or Everest or Niagara Falls, they are going to be fucking goosed for an adjective.

All my clothes are monochromatic but I think this looks ok. Gear! As Ringo would say.

I do like the idea of a training ship for 6 months!

Also to those who are asking if the colours are new, they are not. We wore these colours previously when Umbro made our kits, once with NEC and another time with Danka on.

Think this may have been designed by the guy in the bedsit, who put in a bid to buy Everton a few years back.

It's just a kit, it's hardly worn part from maybe at Chelsea and maybe Villa.

I wasn't too keen on the home kit to start with but you just get familiar with it, at the end of the day, as long as we sign quality players and start winning matches, does it matter??

I had this argument when we had the badge change two seasons ago, different badge but we finished 5th and did anybody take any notice of the badge when we won at Old Trafford or tonked Arsenal 3-0???

Keith Knowles
50 Posted 15/07/2015 at 08:04:26
Shocking design; its about time the club runs design ideas by supporters before going head first and potentially losing out on millions in lost kit sales!

I quite like the idea of an all-black away kit with a blue sash running vertically (not diagonally) down one side of the front of the shirt with the badge incorporated into it and a return to the blue-and-black hooped socks. That would look like we meant business even if we didn't.

Obviously I wasn't expecting that as it's in my head but this season I was hoping for amber and blue.

Andy Bulmer
60 Posted 16/07/2015 at 00:17:33
Can everyone please stop referring to the sleeves as striped? They're hooped, stripes go vertically down the body (Newcastle, Sunderland etc) whereas hoops go horizontally across the body like Celtic etc.

Sorry to be pedantic but my OCD is kicking in again!...

Further, the fact that the kits now have NSNO on the back suggest it wasn't necessary to put it on the badge in the end.

If it's negative Ă˘â‚¬â€ś that's how I feel. It's more Matalan rather than Nike, Reebok or Umbro.

If it didn't have an Everton badge on it, would anyone buy anything like that and venture out during daylight hours?

It would look much better just plain white, without the superfluous hoops, in my opinion, but I guess the club/kit manufacturers have made a rod for their own back by making it compulsory to bring out three new strips every single season. They always have to try and find some (forced) new element to distinguish it from previous efforts.

I'm picturing a night game at Goodison against a nervous looking Liverpool - a nice loud/bevvied/nasty/intimidating atmosphere and Everton walk out in the full Paul Muni.

We could then do a theatrical unlocking of a big chain before games - 'let the dogs loose' type stuff.

And there's no law that says shorts cant be dead long...is there?

I'm actually starting to like it - be dead newsworthy.

Some of the recent away/third kits have been truly laughable, but this one doesn't look that bad. I do, however, agree the long-sleeved version is pants.