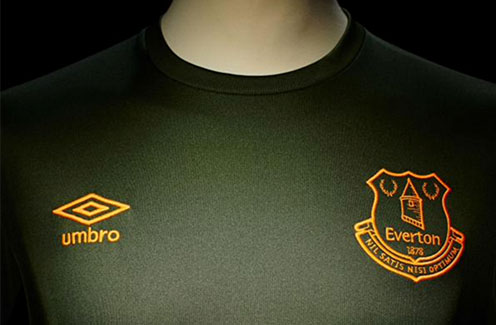 Everton and Umbro have revealed a daring new green third kit for the 2015/16 season with the help of Marvel illustrator, Will Sliney.

Umbro and the Blues commissioned the artist and Evertonian to create comic book drawings of the players wearing the new third kit, which will see the team sport a green outfield strip for the first time in the Club’s history against Southampton on 15th August.

The kit comprises of a green crew-neck shirt with the Club crest and Chang logo in a contrasting, striking orange, with black shorts and green socks.

The reverse of the third shirt, like the home and away, carries an 'NSNO' insignia on the back neck area, a reference to the Club’s famous ‘Nil Satis Nisi Optimum’ motto.

The 2015/16 third kit goes on sale on Wednesday, August 26, both in store and online and is available for men, women, juniors, infants and babies. 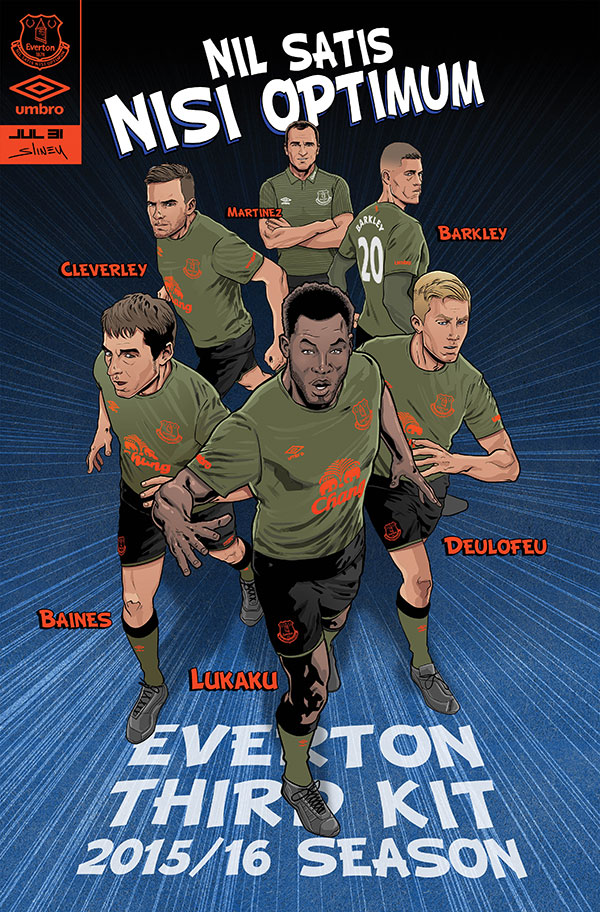 Cork-based Will said: “I've been drawing Everton players as well as comic book superheroes for as long as I can remember. There was always a Duncan Ferguson or a Tony Cottee on the fridge next to Spiderman and Wolverine, so to be invited to be part of this new kit launch is a great honour for me.”

To pre-order the 2015/16 Everton third kit visit evertondirect.com from 8am on Monday, August 3 or Everton One or Everton Two during store opening hours.

This is miles better than our away kit.

The white stripes away kit has looked cool in action but this one......we shall see.

The comic book cover is clearly full-on fantasy. I mean, just look at it. All the players are wearing black boots, Ross Barkley has got his back turned like he's not even arsed and the entire game's just passing him by, and as for Martinez? As if he would just stand there on the sidelines, totally motionless, with his arms folded, watching his players run about like a totally disorganised rabble. Err... ok, probably more realistic than I first gave it credit for.

First saw the image on EvertonUSA. Is this aimed at the US market? We've been at war for most of the last 14 years. This color shirt looks a LOT like tee-shirts our Soldiers and Marines might wear. And that color is part of the uniform pattern.

An oblique entry into the US EPL merchandising market, perhaps?

Well observed but I'm more worried that our new signing from Barcelona only appears to have one leg, maybe his struggles last year are more easily explained.

By the way, when I say Martinez, I mean Martinez the cartoon.

(Actually that could still be a little confusing - when I say Martinez the cartoon, I mean the drawing of Roberto Martinez -- that should do it!)

This is one of my pate hates: needless kit changing.

However, a different approach to the presentation is interesting.

So I guess that's where the green and orange comes into it (Cork based artist.)

Please explain to me how this kit might give us an edge?

The only way I can see that happening is that it's green and opposing defenders might not see Rom ghost past them as he's the same colour as grass.

Then the linesman might not see him in his usual offside position either.

Other than that, I find you statement confusing.

I don't like pate either but I'm not sure what it's got to do with kit changes.

Actually it's not to bad. Out here in New Zealand, the league team The Warriors are wearing a camo shirt so maybe it's trendy...

All we need now is for the money saved to be spent on someone half-decent to wear the kit.

We're getting fleeced and you lot fall for it every time.

As an Everton fan, I'm not sold on this. I would like variations on the club's colours. As for superheroes theme, if I was a 14-year-old boy, then maybe I would be taken, but as a grown man of 45 it's not for me.

I do like the fact that Martinez, with the green and white, rather than green and orange, is just slightly out of step with the rest of the superheroes though and not in a superior way, it kind of captures the feeling I get of something being mildy awry.

I'll buy the shirt on my next visit to the Old Lady.

Maybe they could really shake things up and go for Black & Tan next season?

Adding all the colours that have nowt to do with the club is daft.

I thought the same about Besic. He looks like the kid at school who pulled his shorts up WAY too high. I don't actually know how that picture 'got out'. Probably the same silly tit who didn't batt an eyelid at Aaron Lennon's photo shoot.

Decent kits all-round this year, if you want my opinion -- few do.

If you scroll down to 1887-1890 that kit was actually worn by our neighbours when we left the other place. Our first kit worn at Goodison Park was far removed from the Blue and White we have become so familiar with.

I can't make my mind up about this third kit; at first sight, I thought I didn't like it much but it has some unusual element about it that sort of makes it attractive.

Looks half decent cartoon style, until you see it in reality... absolute gash, Christ only knows what they have lined up for a 4th kit, MC Hammer shorts perhaps.

Someone referenced Dads Army in an earlier post and I reckon that's spot on!

Can't say I'm overly stoked about any of this year's kits. But that doesn't matter when you can't buy them in Australia anyway!! Thank you Kitbag deal!

Gavin Johnson
80 Posted 01/08/2015 at 13:40:17
I still hope we recreate the Black Watch away shirt at some point. Obviously it would be advisable to change the red stripe for salmon pink. I'd speculate there'd still derision by some on TW because pink is too close to red, even though pink is one of our traditional colours.
Phil Sammon
81 Posted 01/08/2015 at 13:43:21
Kerry

You can buy the kits with the exact same convenience afforded to a UK customer.

The #1 blue kit features a blue band around the waist of the shorts. By doing this it makes it appear that the shirt is out, when tucked in.

The #3 shirt has a black band around the bottom, making it seem that it's always tucked in to the black shorts.

I kinda prefer the "shirtail out" look. The tucked in look makes the wearer look like he's got a huge butt; and it seems that the shorts are pulled up past the belly button.

By all accounts he was an Everton fan chosen to meet the players and model the Third kit, took one look at it after stripping and did a runner.

Sadly the fan was restrained and is due to model the kit against Villarreal as part of his community service.

Horrible design element. Was looking for my lad, but now I think he'd like the pyjama top away shirt best.

Vanilla was my favourite oddball kit of recent times. Could use a couple of the players too!