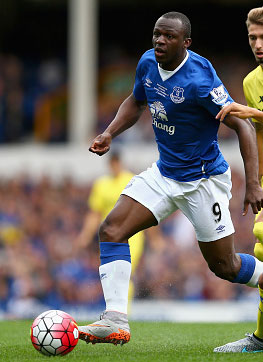 Everton opened a new Premier League season with a 2-2 draw for the third year running as they were twice forced to come from a goal down to deny newly-promoted Watford a victory at Goodison Park.

Arouna Kone came off the bench to grab an assist and a late equaliser just when it looked as though the enterprising Hornets were about to hand Roberto Martinez a damaging defeat following Odion Ighalo's 83rd-minute strike. The Ivorian's lay-off and Ross Barkley's stunning finish had cancelled out Miguel Layun's first-half goal and looked to have turned the tide towards a Blues win but they had to be content with a draw.

Confirmation of Leighton Baines's renewed ankle problems came when Brendan Galloway was handed his third senior start at left back and Tom Cleverley made his Everton debut following his arrival on a free transfer in an otherwise familiar line-up.

Despite giving first starts to a number of new faces themselves and playing their first top-flight fxture for eight years, Watford looked remarkably composed in the early going and when a cross from the left bounced off Phil Jagielka and into Layun's path, the Mexican had the simple task of rifling home from a central position to give the visitors the lead in the 14th minute.

Everton's response was disappointing, however, with Qique Flores' well-marshalled defence closing down doggedly and Martinez's men battling to break them down. Gareth Barry saw a header from a corner touched over the bar by Heurelho Gomes and Barkley was also foiled by a fingertip save from the goalkeeper but that was all he really had to contend with in the first half.

The home side came out of the half-time interval looking more energetic and purposeful, however, with improved deliveries from wide areas, including an excellent cross from Seamus Coleman that was a shade too high for Romelu Lukaku to direct on target. Kevin Mirallas, meanwhile, had a shot deflected wide and Kone, a 63rd-minute introduction for Galloway, went close with a powerful header from Cleverley's whipped ball from the right.

After Jose Cholevas had forced a parried save from Tim Howard at one end, Everton finally found the breakthrough at the other as Kone controlled a centre from Coleman and laid it back to Barkley who smashed an unstoppable first-time shot past Gomes from 20-odd yards.

The Blues were behind again just seven minutes later, however, when Ighalo, himself a substitute for Jurado, capitalised on space ahead odf him and John Stones's decision to commit himself early to a lunging block to engineer a shot from the edge of the box that he placed beyond Howard's reach with seven minutes of the regulation 90 to go.

Kone came up trumps just three minutes later, though, knocking a headed ball on to Lukaku and then continuing his run to meet the Belgian's pass before tucking an instinctive shot inside the far corner from the angle.

Lukaku saw a late volley from an even tighter position easily saved by Gomes before he was replaced by Steven Naismith in stoppage time but despite being roared on by an expected Goodison crowd, the Blues couldn't find a dramatic winner.