Galloway: We can beat Arsenal 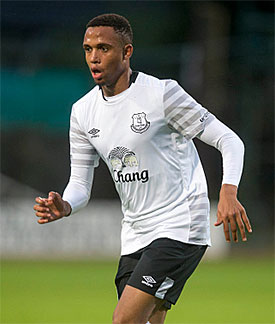 Brendan Galloway says that tomorrow's trip to in-form Arsenal should hold no fear for Everton and that it's matter of the Blues "turning up".

Arsenal have won three on the bounce since being humbled by Olympiakos at home in the Champions League, including a vital win over Bayern Munich that ended the Germans' 12-match winning streak which, when combined with Everton's record on the Gunners' turf, makes the game a daunting prospect.

Galloway, who has been in excellent form deputising for the injured Leighton Baines this season, isn't fazed, though, and he says that the squad have prepared well this week in the expectation of giving Arsene Wenger's men a tough outing.

“We trained hard this week and focused because it’s a tough game,” Galloway said in the Liverpool Echo. “We wanted to work hard.

"When we turn up on our day we can beat any team it is just a matter of turning up. We have worked hard trying to find Arsenal’s weakness, they are a good team, but we can beat them.”

Roberto Martinez spoke about his young defender in his pre-match press conference yesterday and was asked specifically if he felt that the 19-year-old should be given a breather when Leighton Baines or Bryan Oviedo are 100% fit after being thrust into regular first-team duty so soon.

The manager rejected assertion, however: "Brendan keeps surprising everyone. I think his maturity is very impressive. I haven’t see him needing time to rest or time to take him out of the team.

"You need to measure that from week to week and allow football to make the decision. I don’t think there’s a general rule that says because someone is 19 and he hasn’t played before that’s the amount of games you need to give him. It doesn’t work like that.

"We’ve been very pleased with the manner in which he has adapted to the different demands," Martinez continued, "the way that he is growing game by game. Clearly we have someone very special for the future.

"Bryan Oviedo should be fully fit as well and Leighton should be back very soon and that gives us fantastic options which is what you want. I don’t think it’s a case of [resting] people for the sake of it.

"It’s important that we’ve got competition for places in every position and clearly Brendan this season has earned the right to be in the first-team squad and challenging for his position."

I'd like to think they focus and train hard for the game every week!!!

He's spot on when he says we need to "turn up". We have the look of a top side when we do. Will be interesting to see if Funes Mori stays on the bench following last weekend — I suspect he will.

And why should I have any confidence to believe anything these players say?

That said, Galloway has been brilliant in Baines's absence and I'd hate to see him dropped just because Baines is the senior player but I fear that's what will happen.

No, I'm sorry but I can't see anything but a comfortable home win.I hope I'm wrong but...

Anthony Dwyer
8 Posted 23/10/2015 at 21:10:16
This kid's got a great appetite to progress as a top class footballer. I've read a previous interview from him saying he fears no-one and how all players are basically human and can be dealt with. Fantastic attitude.
Tony Hill
9 Posted 23/10/2015 at 21:19:35
He's a serious asset. Poor game last week but he can shrug that off and has real steel. Him, Besic, Funes Mori - the sort of courage we need and all possible future captains, I would suggest.
Andy Meighan
10 Posted 23/10/2015 at 21:30:36
Great attitude, great words, etc, but absolutely not a prayer we'll get a win there. Like the previous incumbent, his bottle goes when we come up against one of the Sky babes, given the one exception at Old Trafford a couple of seasons back. And why should I have any confidence to believe anything these players say?

That said, Galloway has been brilliant in Baines's absence and I'd hate to see him dropped just because Baines is the senior player but I fear that's what will happen. No, I'm sorry but I can't see anything but a comfortable home win. I hope I'm wrong but...
Minik Hansen
11 Posted 23/10/2015 at 21:48:40
Karl Jones,

You wish to see some change in that record? Listen to Brendan Galloway. He has a point, and a point to make in the game. COYB.

Harold Matthews
12 Posted 23/10/2015 at 22:20:40
Terrific battler but "one for the future" says Martinez. Sounds like he'll be straight on the bench when Baines returns but has certainly made his mark. Hope he's learning to use his right foot.
James Martin
13 Posted 23/10/2015 at 22:33:58
Tony, you're right, they've got something that a lot of the rest of the squad don't. That mental attitude of just being completely unbothered by who the opposition is. Almost the bigger the better for them. Similar to the likes of Cahill and Ferguson who would also get up for those games.

Far too many of the current squad are beaten by a top team before they even go on the pitch, which explains our woeful derby record against very poor Liverpool sides.

Oviedo, Galloway, Funes Mori, Gibson, Besic, Mirallas. Lukaku – all back themselves to perform in big games. Most of the rest just retreat into their shells at the slightest sign of pressure. Just not enough winners in the team.

Tony Hill
14 Posted 23/10/2015 at 22:37:12
You're right, Harold, about his one-footed play but he has some confidence this boy which you can't instil by coaching. It's an interesting point about one-footed players; Bobby Moore could hardly use his left foot and then you have the attackers like Puskas, Maradona, Messi, Giggs and Bale all left-footed.

Baines is almost exclusively left-footed too but I agree that defenders need to be more balanced if possible and I'd like to see Brendan get more comfortable on his right side.

Harold Matthews
15 Posted 24/10/2015 at 01:05:29
Yes, Tony, but all those guys could use their weaker foot if circumstances demanded it. Only the other week, I watched the seemingly left-foot-only Funes Mori clear the ball from our box with a brilliant right-foot overhead kick.

Also, in a fantastic six-man move which led to a Lennon goal last season, Baines received the ball off McCarthy before cutting inside and hitting a 20-yard reverse right-footed pass to Kone who was positioned further up the wing. Class stuff indeed. My eyes popped.

At the moment, young Brendan has great trouble turning anti-clockwise with the ball at his feet and it has caused panic on more than one occasion. Practice and experience will gradually sort this out so I'm not really too bothered about it. The lad should have a good future.

Brian Porter
17 Posted 24/10/2015 at 02:56:30
I felt we were far more secure in defence with Funes Mori at the back. He won't be content with a place on the bench indefinitely either, I think. Martinez has bought what I believe to be a very good player and in doing so has created a bit of a dilemma for himself.
Harold Matthews
18 Posted 24/10/2015 at 08:41:37
Brian. Good point with regard to the CB dilemma. We have three internationals who will not be selected for their country if they are not playing regular top class competitive football.
Richard Reeves
19 Posted 24/10/2015 at 10:59:56
We need more players with his attitude. Arsenal aren't that good, we should be going into this game thinking about unfinished business from Martinez's first outing at the Emirates and attacking from the first whistle. No sitting back and bringing on the pacey wingers to nick a goal – start with intent to hurt them early.
Peter Gorman
21 Posted 25/10/2015 at 12:36:51
Actually, not his best game for us so far but I do like his attitude. Late in the game he manhandled Carzola (I think) out the way after we won a freekick. When the Goon responded, he did it again. Nice.

Also Deulofeu is another one who puts the seniors to shame with his attitude. That risible prick Monreal cried to the ref when Geri handled the ball before it went out of play (and then gave it to Monreal for a throw-in). What utter gamesmanship and disregard for a fellow pro. Needless to say, Geri told him exactly what he thought of him then and later.