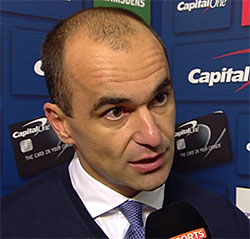 Roberto Martinez was full of praise for his side's mature performance in this evening's Capital One Cup quarter-final at Middlesbrough where goals by Gerard Deulofeu and Romelu Lukaku put them into what proved to be an unassailable lead and booked Everton's place in the semi-finals of the competition.

The Blues avoided a repeat of Saturday's calamity at Bournemouth where they gave up a precious two-goal advantage, regained the lead in stoppage time and then threw away the points shortly after the restart. Martinez's men took a 2-0 lead into half time and were composed enough to see out the match without conceding at their own end.

The Catalan expressed his satisfaction at how well his players had heeded the events at the Vitality Stadium and turned in a professional display at the Riverside Stadium.

"We knew that away from home no matter who we were playing against that we needed to be mature and control the game and I thought we did that really, really well," Martinez told Sky Sports, "especially after what happened at the weekend when we went 2-0 up. I thought we showed real resilience and a good maturity and we showed that we learned a lot from the weekend which is always pleasing.

"But it was about getting through to the semi-final which is a terrific feeling and it's for the fans. As you saw, they were here in huge, huge numbers and it became a really good memory for our football club and now we need to carry on.

"I thought we defended well at times and had really good opportunities where maybe we should have taken a better option ... but I thought overall the two goals were exceptional pieces of quality, which is never something to be taken for granted. The finish from Gerard Deulofeu and then the header from Romelu Lukaku was of terrific quality.

"But more than anything, after going 2-0 up, to keep the clean sheet was probably the most pleasing aspect of today's performance."


Abhishek Saha
1 Posted 02/12/2015 at 03:06:46
Agree with you Bobby Brown, going 2-0 up against Boro was never a concern, keeping a clean sheet was! So that was no doubt the most pleasing aspect of today's perfromance.
William Cartwright
2 Posted 02/12/2015 at 08:16:31
I wish ToffeeWebbers would give Roberto and the team a break. Every game is 11 v 11 (unless it's the Redshites then it becomes 11 v 14). Bournemouth are a fantastically well managed team with an Everton supporter at the helm and two ex-Everton players on the pitch so motivation was never going to be a problem for them. Bournemouth effectively "beat" the Redshites this season, and Swansea but for ridiculously bad penalty calls.

Okay, we let it slip but the last-second equalizer could have happened to any team in the league. Why get so stressed out and ultra negative? The result against Boro last night was a class management and player performance. Fans who think that simply putting the best 11 players on paper onto the pitch just don't understand football.

This season is starting to look quietly promising. Silverware? A good chance of. Top 4? Entirely possible. Lukaku overtaking Jamie Vardy as the lead goalscorer? Could happen...

Like everyone else, I don't understand how Mirallas is overlooked for Ossie or Lennon, but there is obviously something behind the scenes and I'll reserve my opinion on that. For now, I am as pleased as punch to be an Evertonian, and thank goodness to Roberto for bringing Rom and Gerry to the club!

Liam Reilly
3 Posted 02/12/2015 at 10:47:41
We rode our luck a little in a period in that second half when they had 67% possession and had a couple of good chances. I feared for us if they'd have got one. RM should've made a change earlier in the second half as Osman, Deulofeu and Cleverley were clearly tiring.

Mirallas looked sharp when he came on and is not getting a fair crack at the whip imo. Getting on for 7 mins at the end is just nonsense.

I suspect he'll be off in January and, if we don't make the Champions League, there could be an exodus in the summer.

Tony Waring
4 Posted 02/12/2015 at 11:23:21
Although we kept a clean sheet, I still think we relaxed in the second half and knowing that we are capable of stringing passes together – wasn't it 26 for the second goal? – we surrendered the ball on too many occasions, which, against the tope sides, is asking for trouble.
Brian Garside
5 Posted 02/12/2015 at 15:40:51
RM made some interesting comments regarding Robles before the match praising his qualities. Why then is he unable to see the flaws in Howard's game?

Having trained boys in the art of goalkeeping I see basic errors in Howard's game. Robles is certainly worth a run of games which would prove or dissprove the argument over which of the two should be first choice.

I agree with earlier concerning baffling substitutions. RM was excellent with both choice of replacment and timng durring his first season.
Jamie Crowley
6 Posted 02/12/2015 at 18:40:22
I heard a very interesting comment on Sirius (satellite radio here in the States) yesterday. They were discussing Caleb Porter – manager at Portland Timbers – and there were some parallels with Everton in my opinion.

At the beginning of the season, things were not going well at all for Portland and they were coming off a disappointing previous season. The supporters were very unhappy with Porter. Seems he was shitting rainbows at his press conferences despite a very run of bad form. The supporters were upset and asking why oh why the manager was so damn positive when there were glaring weaknesses and serious issues afoot.

Porter explained recently that he knew the supporters were unhappy, but he felt the team had the makings of being great and had a massive amount of potential. He very intentionally spoke glowingly about the squad because at the time he believed they could be great and he didn't want to lose the dressing room – so he continually stayed overly positive to keep the team focused, happy, and on track. He said results would come and that there was real quality in the squad. He never spoke negatively and was never critical.

I see similarities with Roberto. His approach has been one that has rankled fans with his continual positivity and approach.

I wonder aloud if he has had a similar situation to Caleb Porter and despite probably internally wanting to go postal, he stayed unwaveringly positive for the good of the long term vision and health of the team.

I think this is a distinct possibility. I believe Roberto believes he can build a very, very good squad at Everton and I think his approach isn't near as superficial as many would believe or react as such.

He has a young players and is trying to develop them while having to deal with the usual growing pains, tough losses, angry supporters and a tough press.

I'm sure behind closed doors he lets them know how they need to improve – as they have. Young players can be fragile and he does a good job shielding them.

Martinez came with a plan and set everything in motion fairly swiftly. Mistakes were made but he learned from them and is now back on track with renewed confidence. He knows he will lose his best players but sees it as an opportunity to enlarge and strengthen the squad.

Amid these transitional periods there will be the odd season where we make an early decision to keep the squad together and challenge for honours and this is where we are right now. Offers for various players have been put on hold and the League is about to find out that we mean business. Season 2015-16 will be one to remember.