Lukaku: Players are ready for the Champions League 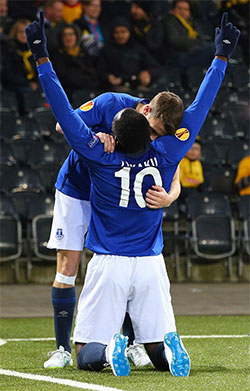 Enjoying a rich vein of form himself, Romelu Lukaku feels that the next step for Everton is to finish in the top four, something he feels is achievable this season.

The Belgian is the second highest scorer in the Premier League behind Leicester's Jamie Vardy heading into this evening's clash with Crystal Palace at Goodison Park and he feels that he is back to his best form after a rocky 2014-15 campaign.

Lukaku has scored in each of his last five games, equalling Joe-Max Moore's feat for the Blues, and he is hoping that he can match Peter Beardsley's six consecutive matches with a goal against the Eagles.

"The way I’m playing, I feel like I can score every game," he told Sporza in Belgium. "I am now second top scorer, four goals from Vardy, but we’ll see where I end up. I want to continue to develop as I am now. Then I can live up to what the people see in me.

“I am a winner and I want to contribute to every Everton victory.

“How can I explain [my good form this season]? I had a good preparation and I’m more ambitious than ever. The team also runs better than last year.

“Last summer I decided not to dwell too long on a good performance. I always look for the next match. But the public always expects more and I think this season I haven’t played a bad game. I am very satisfied.

"We are doing well now," the 22-year-old continued in reference to the Toffees' recent results, "but we can’t peak too early, because the season is long. I think we could finish fourth or fifth, but to do that we must win points against the top teams and also win against relegation candidates.

“The next step for Everton is the Champions League. The players are ready.”

While his immediate focus is on Everton, Lukaku also has an eye on next summer and the European Championships with Belgium. The former Anderlecht man is enduring something of a goal drought for his country and he faces stern competition for his place from the likes of Christian Benteke, Divock Origi and rumoured ex-Blues target Michy Batshuayi who is attracting attention in Ligue 1 with Marseille.

“What’s the difference [between Everton and Belgium]? We’re playing in the same 4-2-3-1 formation, we have the same type of players, as much possession ... It is said that Everton play counter-attacking football, but that’s not true. “Here I have just a freer role," Lukaku explained. "I do everything on instinct and I can actually do everything. I score with my head, with the left foot, with my right foot, far post goals and near post goals. At some point I will do for Belgium what I do here."

We definitely need a new #1 as all good sides are built first and foremost on stability and we just don't have that with either of our two keepers. We would also be short if Rom, Ross or Del Boy were to get injured.

Harold Matthews
3 Posted 07/12/2015 at 17:53:52
So true, Liam, but we're having a go this season, short or not. Players will leave in the summer and those extra players will be added. According to Martinez, the club is already on the case.
James Flynn
4 Posted 07/12/2015 at 18:19:51
Well, I think this team kept together can do the business next season. But the addition of Delboy changes things. Opposing players, now, have to be AFRAID of Everton.

I appreciate reporters pick or choose whatever quotes they want; part and parcel. But this: I think we could finish fourth or fifth, but to do that we must win points against the top teams and also win against relegation candidates."

Nah, youngster. The leagues wide open and you know that better than any of us watchers.

Leads me back to a point of running discussion on here I agree with. We're still missing that nasty bastard leader Rom would have thought twice about before saying such a thing to the Press.

Names will mean nothing to 99% in here. But from the American view of true team leaders, we need a Broad Street Bully's Bobby Clark (can't believe I'm crediting that little prick) or a Mark Messier.

No doubting all the top top players have it.

Right Rom, let's see you go out and bully these eagle defenders and show them your every word you say you are! Putting that sort of pressure on himself is bound to motivate him more than anything anyone on here can say.