Roberto Martinez and his players handed out a raft of Everton gifts, including cuddly toys, blankets, cushions, colouring sets and jigsaws, and passed on their best wishes to patients and their families, many of whom are set to spend the entire festive period on wards at the hospital.

“When you walk into the new hospital you can see that it is an incredible building," said Blues boss Martinez. "It’s quite special and with the staff and the warmth that you walk into, you can see the incredible job that they do. People are prepared to give their lives to help others through very difficult periods with illness. Alder Hey is a special place in our city. It gives you a sense of perspective in life and a sense of pride because of the fantastic work that’s being done on a daily basis. It’s good to share this Christmas spirit with the fantastic people here."

Alder Hey cares for over 270,000 children each year and has forged strong links with Everton, who also run daily activities at the state-of-the-art hospital through the Club's charity, Everton in the Community.

The new Ł250million healthcare campus, known as Alder Hey in the Park, is the result of a decade-long project to create a modern, world-class medical facility for the city, with the design inspired by children. 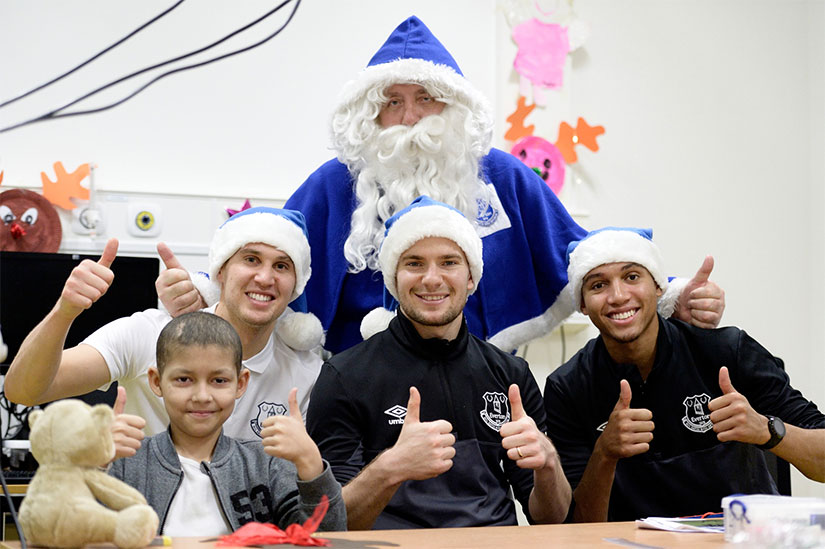 Everton defender Leighton Baines, who was given a private tour of the new-look wards in September and became an official patron of the Alder Hey Children's Charity last month, said: "It's a fantastic facility and even though I've been here a few times now I'm still blown away by what they have achieved. To be able to come here with the rest of the lads today and see so many smiles on the kids' faces is a privilege.

"There's never a nice time for children to be poorly but this is a particularly difficult time for them and their families, so if us being here can just brighten their afternoon for a few hours then it's important we do that.

"As a patron of the hospital's charity I would like to send all the patients, staff and families my best wishes for a very Merry Christmas and a Happy New Year."

The trio dropped in on patients at Woodlands Hospice in Aintree, the children’s wards at Whiston Hospital and the stroke rehabilitation ward at the Royal Liverpool Hospital.


Paul Jeronovich
1 Posted 15/12/2015 at 20:51:33
Proud to be blue!
Robin Cannon
2 Posted 15/12/2015 at 21:52:32
Whatever other flaws there are with how the club is run (and there are a few!), we are genuinely genuinely excellent at this kind of stuff. Our community programmes are the best around.
Gerry Quinn
3 Posted 15/12/2015 at 23:56:39
Wow, brought a few tears to my eyes, that video – what a lovely, really beautiful thought that these players do outwith their playing careers. And despite all of the the criticism our Roberto takes regarding his management, what a truly genuine man and great Ambassador he is for Everton. Paul summed it all up – proud to be an Evertonian.
Andy McNabb
4 Posted 16/12/2015 at 05:46:44
Brilliant. Makes you feel humble and proud at the same time.
BW Johnson
5 Posted 16/12/2015 at 06:50:30
While I don't follow what other clubs do too closely... I firmly believe (and I recollect awards confirm) that we are the best community club in Britain. The goodwill and spirit is second to none. Roberto embodies the decency and class associated with this club. NSNO. Proud to be a Toffee. Merry Christmas everyone.
Mark Andersson
6 Posted 16/12/2015 at 09:33:04
Class, made me feel home sick, Chirstmas in the Aussie sun just ain't the same.

Good on all involved not just the players. Always a humbleing experience going into Alder Hay.

Ciaran Duff
7 Posted 16/12/2015 at 10:48:10
I am not sure how much charity work other clubs do but my impression is that Everton as a club and as players put a lot more time and effort into community.charity work. Obviously this is great for the community and makes good PR too. However, what is sometimes overlooked is the benefit to the players themselves.

Professional players with a lot of money and spare time on their hands can lose perspective and get themselves in plenty of trouble. Giving them meaningful work like this helps keep them grounded. Whatever the reason, the club does a great job in this area.

The visits by the players can hopefully benefit the children and the young players who are much more fortunate will have a 'real' insight into just how lucky they are.Baines is a great ambassador for the club and certainly wears his heart on his sleeve.

We certainly should be proud of our club.

When they arrive on the ward it is literally half the squad plus the boss and the atmosphere they generate is, well, phenomenal. For the kids, this is much more important than how we defend corners, and we should be proud of our club.

Now give me an early Xmas present with 3 points on Saturday against Leicester. God bless all those poor kids in Alder Hey over the holiday, our thoughts are with them.

It's something that must help the players emerge from the bubble they live in. I'd like to think more players can do this off their own bat. The likes of Big Dunc and Cahill went in their own time. It's not just footballers, many of us don't realise how lucky we are.

This sort of thing makes you proud of the club.