Jagielka pencilled in for Dagenham tie 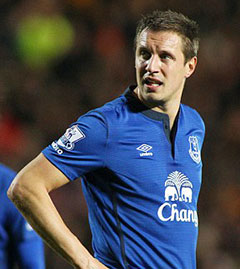 Roberto Martinez has confirmed that Phil Jagielka won't start in Wednesday's Capital One Cup semi-final first leg against Manchester City but he could be involved at the weekend.

The Blues' skipper was named among the substitutes against Tottenham yesterday but the manager says that had he been involved in the game it would only have been for 15 minutes at the most.

Jagielka has been out of action with a medial knee ligament injury since October but is back in full training and could start return against Dagenham and Redbridge when Everton kick off their FA Cup campaign at Goodison Park.

"He's not fit to start [against City", Martinez told the media yesterday. "Today he would have been fit for a short spell, maybe 15 minutes maximum.

"For us it was important to have the figure of a captain ... someone who could give us a feeling of comfort in the dressing room.

"He will be part of the team for the next few games. [T]o start, we're talking maybe the FA Cup Third Round as a more realistic target."


Dean Adams
1 Posted 04/01/2016 at 21:23:13
Good luck Jags. It is a tough place to play at the moment for the home team and a solid performance will help to ease the concerns.
Kieran Kinsella
3 Posted 04/01/2016 at 23:41:18
Bizarre decision to have him on the bench if he can only play 15 minutes. I get what he's saying but while the site of Jags might give some a boost or a kick up the ass ahem, Mori, what about the flip side of the psychology. Hey Gibson, McGeady, Pennington, McAleny etc etc it's more valuable for us to have Jag as an unused sub visible to players than it is for us to have you ready to roll fighting fit off the bench.

Surely Jags could attend the game without being a sub? Also, imagine if say Stones pulled a hammy and Mori got sent off, wouldn't it be wiser to have subs you can really use?
Eddie Dunn
4 Posted 04/01/2016 at 23:42:10
I am shocked to hear that Jags took a valuable seat on the bench, when he would only have been fit enough for 15 minutes of play. Surely this is folly of the first order? Even with Galloway there to cover left back and presumably centre-back, it still meant that one less option was there for us during the game. I think that if Jags is so unready, it would have been daft to put him anywhere near the likes of Dier and Vertonghen.

He needs to be up to speed when he does make his return, as we don't want him to damage himself, and we don't want him on the field and unfit, like in the derby at Anfield, when he was playing with a hamstring strain. Within a month, he was out again for 10 weeks.

Don't rush him back!

A very physical game may not be the right one to bring him back.