Irish duo back in training 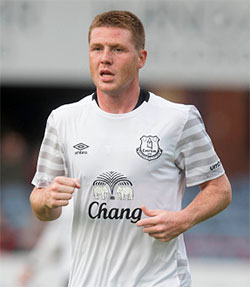 James McCarthy is nearing fitness after his aborted comeback last month
Seamus Coleman and James McCarthy are both on the comeback trail and could be fit for the Capital One Cup semi-final second leg against Manchester City next week.

The pair have resumed full training but are unlikely to be considered for Sunday's clash with Swansea City, with Roberto Martinez pencilling them in for the all-important return to the Etihad Stadium.

McCarthy has been sidelined since an abortive return to action against Stoke City last month where he aggravated a groin problem that he first picked up in the draw at Bournemouth in late November.

Coleman, meanwhile, hobbled out of the first leg against City with a calf injury but his manager is hopeful he will be ready by next Wednesday.

Martinez has been buoyed further by the fact that Bryan Oviedo should be fine for this weekend after receiving the all clear on his ankle. The Costa Rican was stretchered off as a precaution at Stamford Bridge on Saturday in the 3-3 draw with Chelsea after taking a kick to the same leg he fractured two years ago at Stevenage but suffered no damage.

"It was more of a strong kick to the leg in the same area he had the fracture and a nerve reacted and Bryan got the sensation and the feeling that he felt the worst," Martinez told evertonfc.com.

"It ... could have caused problems [but] the body and the leg reacted really well."

Finally, Tom Cleverley, who was also substituted against Stoke and then again against City in the cup because of a calf strain of his own, should also be back for the visit of the Swans this weekend.

McCarthy, much like Coleman in my opinion, has dropped off in the last 12-18 months; he was outstanding in Martinez's first season but there's always been something more from James McCarthy that we never quite get. He has the ability to burst more from midfield, as seen against Manchester United last April, but doesn't do it anywhere near enough.

That was probably another factor in the Sam Byram saga ..... "Coleman is injured at the moment Sam, and as soon as he's fit he will be straight back into the first team, but sign for us because we want 'competition for places' right through our phenomenal squad...... Sam??? Sam!!! Come back!!!!! We were in a moment!"

Andrew Ellams
10 Posted 19/01/2016 at 09:22:13
Geoff Evans, I'd like to see them both in the team with licence to dominate the middle with Barry shielding the back four. Then pick two from Deulofeu, Mirallas, Barkley and Kone to play alongside Lukaku.
Abhishek Saha
11 Posted 19/01/2016 at 09:30:42
Besic please in the Cup tie!! Coleman preferred over Oviedo, but cannot risk a player making an injury comeback in the most important game of our season so far. Let Coleman and McCarthy get some match fitness back in the FA Cup tie.

Maybe stick with Stones. Give the Stones, Funes Mori, Jags, Baines combination a decent run together against Swansea for them to gel as a unit.

A decent performance against the Swans and Mirallas will make the left wing place his.

Stones has had a few knocks recently, and his form has dipped.

Coleman really needs the competition, it now appears it won't be Byram, so no one to keep him on his toes!

I still find it hard to believe that Byram will start for West Ham, but hey not our problem, we've got a couple of big games coming up, so only interested in our players & with Wembley beckoning, the motivation next week to keep a lead (2-1 first leg), doesn't get any bigger at this moment in time!

I think the Swansea game can give us such an impetus toward the semi's, providing we win of course, by doing it in style & with a few goals to spare too no doubt! Three points & a cup final please lads.....NO pressure COYB!!

James Stewart
20 Posted 19/01/2016 at 12:00:20
Besic should be first choice when fit. McCarthy and Barry it's either or depending on the opposition.
Geoff Williams
21 Posted 19/01/2016 at 12:54:05
I would play Barry, McCarthy and Besic every time with Barkley sporting Mirallas and Lukaku up front. Cleverley could and should replace any of the midfield players slightly off their game. Deulofeu could replace Mirallas as and when necessary.

My reasoning: to call Barry, Besic and McCarthy holding players is disingenuous; they are good footballers who cover acres of ground each match and most importantly they can tackle. They would cover the fullbacks when the fullbacks attack and they would make up for the defensive inadequacies of Barkley and Deulofeu.

Besic is better, stay with him!

Will Firstbrook
24 Posted 19/01/2016 at 15:18:16
Great news Macca is returning to fitness but any serious consideration to bringing him straight into the starting 11, especially for the Cup tie, is nothing short of madness.

Besic offers similar cover when defending and more going forward. He and Barry have established a good understanding over the past several matches and tinkering with that now especially for such an important match is unthinkable (yet I know Bobby will do his best to prove me wrong).

Jay Harris
25 Posted 19/01/2016 at 15:41:59
Great news that the guys are returning to full fitness but, like some others, I would like to see McCarthy, Besic and Barry against Man City with Deulofeu Lukaku and Mirallas up front. Bring Barkley on second half to replace the tiring Deulofeu.
Christy Ring
26 Posted 19/01/2016 at 15:55:00
If McCarthy is 100%, I'd play him in his proper position, defensive midfielder against Man City, with Besic, and give Barry a rest.
Iain Love
27 Posted 19/01/2016 at 18:01:17
Barry is in good form and should not be dropped, we are far less a team without him. McCarthy will probably need a few games to be considered match fit and mustn't replace Besic against Man City. I don't want to see Stones at fullback either.

Man City only need one goal and they're through; if we sit back and try to see the game out, we'll lose.

Jags is the best defender in the Premier League.

Will Firstbrook
31 Posted 20/01/2016 at 15:35:40
At present, I believe Barry offers better cover for the porous back four than McCarthy. He regularly slots into vacated space when one of our full-backs decides to push forward. Despite his limited agility, he reads the game well and doesn't try to do too much. Unlike McCarthy, he looks for a forward pass and has created some great chances lately by doing so. I firmly believe Besic's current form is also due to Barry's support.

I am not yet convinced of the McCarthy/Besic combination, though would like to see it trialed in a few matches – just not the Citeh match